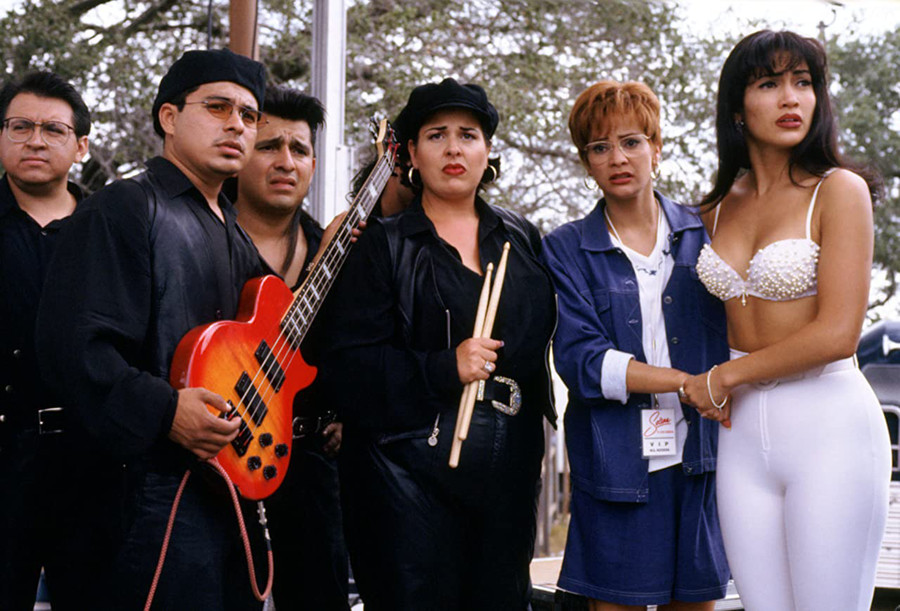 It’s always fun to get a glimpse of someone out of their “normal” surroundings, but these musicians prove that they’re just as comfortable and in their element on-screen as they are on stage and in the studio. Let’s take a look at who they are, and the movies that sent them into the cinema spotlight.

Jennifer Lopez’s breakout performance as Mexican American music sensation Selena Quintanilla remains a fan favorite more than 20 years after its release. The memorable biopic landed her a firm place in Hollywood’s graces with a Golden Globe nomination and helped launch a singing career of her own. Actually, that’s not even her singing in the movie.

That’s right — before “Selena,” Lopez was a professional dancer and didn’t really do much singing until the release of her first album, "On the 6." The top hit? “If You Had My Love,” which became one of 1999's worldwide best-selling singles. Not bad for a former “In Living Color” Fly Girl.

Even though Mark Wahlberg was only part of New Kids on the Block for a few months, he still managed to go platinum as rapper Marky Mark and the Funky Bunch before making his transition to acting.

With his first starring role in the disturbing psychological thriller “Fear,” he quickly rose to leading man status with subsequent parts in “Boogie Nights,” “Planet of the Apes,” “The Departed” and dozens of other blockbuster hits, including the lead in “Rock Star.”

Besides acting and raising four kids, he also finds time for his ever-expanding business empire — the focus of “Wahl Street,” a brand new reality show from HBO Max.

Queen Latifah first took to the screen as a waitress in Spike Lee’s “Jungle Fever,” but her first major role came about seven years later as a nightclub songstress in 1998’s “Living Out Loud.” Almost a decade beforehand, she dropped her debut album "All Hail the Queen," featuring the hit single “Ladies’ First” — which still very much slaps to this day.

Since then, she’s had a genre-spanning film and music career, covering rap and hip-hop as well as rom-coms, dramedies, sci-fi, horror, musicals, and more. She’s been nominated for over 100 awards across categories and arts, including an Oscar nod for her supporting role in “Chicago” and a Golden Globe win for her 2007 role as an HIV+ woman in HBO’s “Life Support.”

Jennifer Hudson’s star-making film debut in “Dreamgirls” landed her an Oscar, as well as a Golden Globe for Best Supporting Actress. She even received rave reviews from the queen herself (also known as Oprah), who called the performance “transcendent” and even “a religious experience” on her show.

Hudson rose to fame as an “American Idol” hopeful, somehow only placing seventh at the end of season three, and has gone further than any winner since. Her chill-inducing vocals can be heard on three studio albums, as well as movies like “Sing,” “Black Nativity” and “Cats,” in which she sings the unforgettable track, “Memory.”

Next up? A starring role as Aretha Franklin in the highly anticipated new release “Respect.” Now that’s what we call coming full circle.

At the height of her music career, Madonna became a screen starlet as well. While her very first film was a flop, the subsequent “Desperately Seeking Susan” was named one of the top 10 films of 1985 by The New York Times, landing Madonna on Hollywood’s radar — and not just because of her in-flick hit “Into the Groove,” featured on her incomparable "Immaculate Collection."

Fun fact: other actresses that were considered for the role of Susan? Goldie Hawn, Melanie Griffith, Ellen Barkin, and Jennifer Jason Leigh. But the comedy of mistaken identity was just the beginning of Madonna’s time on the silver screen.

Then came the cult classic “Dick Tracy,” Woody Allen’s “Shadows and Fog” and Penny Marshall’s classic “A League of Their Own” before her starring role in the 1996 musical drama “Evita,” which earned her a Golden Globe for Best Actress. Word has it that her next role will, once again, be as director — her third time behind the camera, this time of her own biopic, co-written by Oscar-winner Diablo Cody.

Will Smith: “The Fresh Prince of Bel-Air”

Before starring on the beloved sitcom, Will Smith was actually a small-time rapper going by the name of The Fresh Prince. His talent and unparalleled charisma landed him his own show (and earned him two Golden Globe nominations for the role), as well as a long and fruitful film career. His first serious role came alongside Donald Sutherland and Stockard Channing in “Six Degrees of Separation,” where he played a real-life 1980s con man and robber who scammed people into thinking he was the son of actor Sidney Poitier.

He’s starred in dozens of blockbusters since then, from big-budget sci-fi favorites like “Independence Day,” “Wild Wild West,” “I Am Legend” and the “Men in Black” franchise to sports dramas “The Legend of Bagger Vance” and “Ali” and a slew of other comedies, dramas, action movies, and family favorites. His next project?  This year’s forthcoming “King Richard,” where he plays the father of Serena Williams — the man responsible for shaping her and her sister’s tennis careers.

Did we miss your favorite musician-turned-actor? Let us know who on social media and share predictions for the next singer, rapper, or songwriter who you expect to make the leap to the screen.