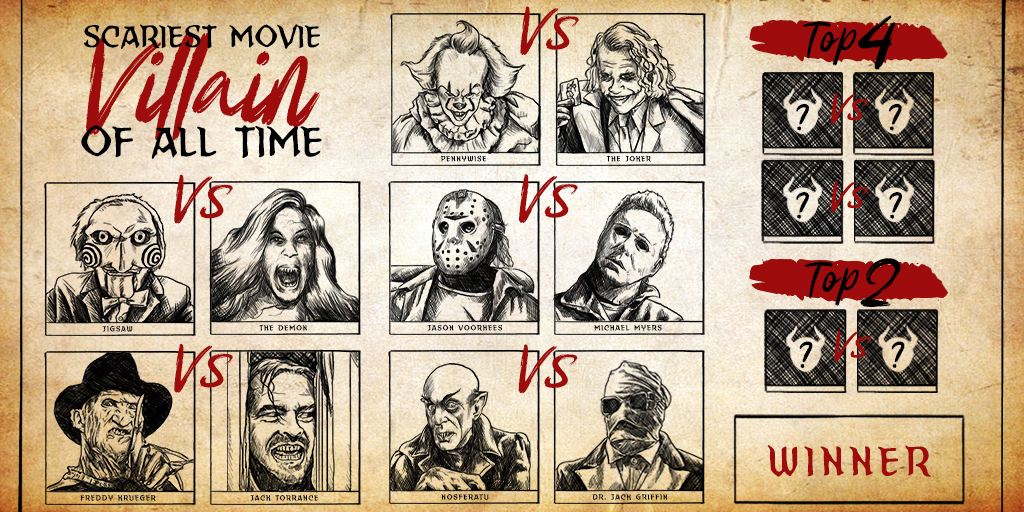 The Scariest Movie Villains of All Time: Revealed

We started with ten terrifying antagonists that have been spooking audiences for years. You voted, we tallied and narrowed the results to the final four. And now, with Hallows eve in the rearview mirror, and the Holiday Season now upon us, the results are finally in.

According to our readers, the Scariest Movie Villain of All Time is (drum roll, please) none other than The Jigsaw Killer of the “Saw” film franchise.

And it makes sense when you think about it. As fear-inducing as Freddy Krueger, Pennywise, and all the rest of them are, they’re all just made-up beings. Jigsaw remains the most hair-raising villain — precisely because there’s nothing supernatural about him. He’s just a regular guy; a former civil engineer who finds himself facing a terminal cancer diagnosis. But after a suicide attempt leaves him with a new lease on life, he loses touch with reality altogether.

With an extreme set of beliefs and the twisted idea that he’s making a positive difference in the world, this sick and violent villainous mastermind figures out how to pray on his victims in the most gruesome and disturbing ways, destroying them psychologically before driving them to murder and grotesque self-harm. He drops his subjects into horrific scenarios, specifically tailored to their behaviors and morals (or lack thereof), forcing them to injure or kill themselves and each other while proving their very wills to live – even as they die.

His aim isn’t murder, per se, but to teach; in his warped mind, Jigsaw intends to teach his victims a lesson – at least the ones who survive. The ones that don’t make it suffer one final horror: He cuts a puzzle-piece shape of flesh from the dead, meant to symbolize a survival instinct they failed to display.

After the Jigsaw Killer finally dies in “Saw III,” the world still isn’t safe from his menacing ways. His accomplices ensure that even in the afterlife, his insane, murderous games continue to haunt the living. Horrifying, really. And it seems like you sickos can’t get enough, since he’s been doing it for eight (soon-to-be nine) movies in succession. Never mind that Jigsaw’s dead; he keeps coming back in flashbacks throughout the sequels, revealing just how much evil he was able to create during his time on earth.

Coming out next year, the next and ninth installment – “Spiral: From the Book of Saw” – stars Chris Rock and Samuel L. Jackson as two law enforcement officers at the center of a grisly investigation that just so happens to echo violent murders of the city’s past. But when the hunters become the hunted, they’ll find themselves at the heart of yet another morbid game. And as long as there are willing players, who knows how long it can go on for?

Rock, for one, who’s been a long-time fan of the franchise, told Variety: “I’ve been a fan of ‘Saw’ since the first film in 2004 [and am] excited by the opportunity to take this to a really intense and twisted new place.” More intense than the last eight movies? We’ll just have to wait and see.