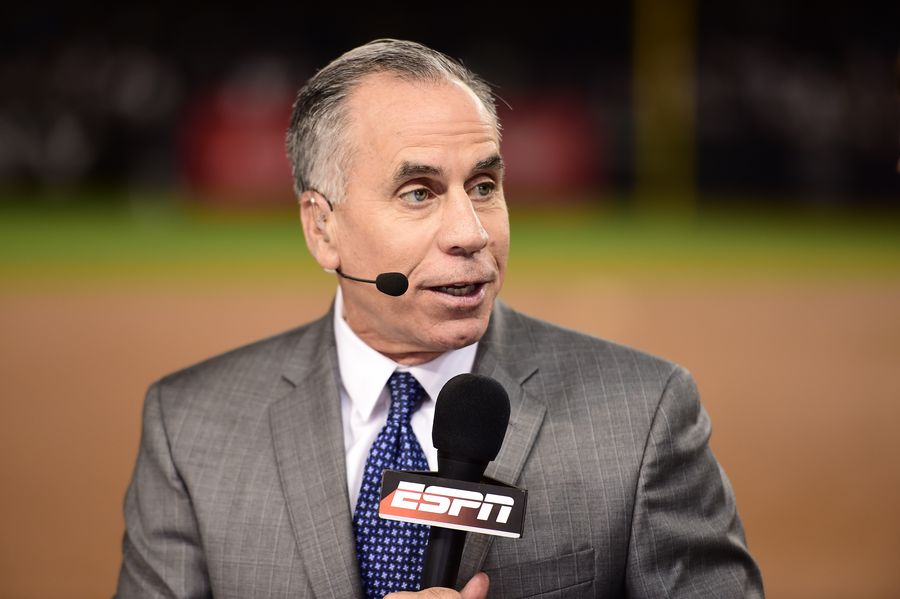 In this edition of "5 Questions," the baseball guru himself Tim Kurkian gave us all the MLB mid-season updates you could possibly need – the pros and cons of the Yankees power lineup, the impacts of players returning from injury, the top young MLB talent, notable divisional races and potential 100 game winners. On top of that, we couldn't let talk to Tim without getting an insightful baseball stat, so don't miss the bonus question.

1) With Mike Stanton and Aaron Judge returning for the Yankees, and then the integration of Edwin Encarnación into the lineup, do you see anything holding them back the rest of the season, aside from injuries?

Tim Kurkjian: I think they’re going to hit more home runs than they did last year, when they set the record for home runs, and they still might not hit the most in the major leagues this year because there are so many other teams hitting the ball out of the ballpark at historic rates. But when everyone is healthy for the Yankees, I’m not sure if I’ve ever seen a team that powerful when it comes to the long ball. Now, I’ve seen better lineups than this when it comes to putting the ball in play. But not when it comes to raw power. Especially on the days when Gleyber Torres might hit ninth! That’s how deep this lineup is. It’s one through nine and it is breathtaking to watch.

DIRECTV: When the playoffs come, do you think the Yankees will be held back by the fact that they are so heavy from the right side of the plate?

TK: Yes, and they got hurt in the post-season last year because, like in all post-season games, you can pitch to great lineups if those lineups are somewhat one-dimensional. In the Yankees case, very right-handed. Last year, in the Yankees case, very much power oriented, not that great at putting the ball in play, and we saw what happened to them. They hit their share of homers, but you can pitch to power teams these days as long as you locate and know what you’re doing—and most pitchers do these days. So I think that October is an entirely different beast than the regular season when you’re facing some bad teams with mediocre pitching. In October, all you’re seeing is really good teams and really good pitching.

2) Both the Yankees and Red Sox have been battered by injuries to start the season. Some of the big pitchers waiting to come back are Nathan Eovaldi for the Sox and Luis Severino for the Yanks. Of these two, who do you think will have a bigger impact on their team when they return?

TK: Eovaldi is really important to the Red Sox because he can also close if they need him too, although I don’t think they’re going to use him that way. I think Severino has a chance to be a huge bonus for the Yankees coming back. When he is healthy, he’s the best pitcher on their team, he’s one of the best pitchers in the American League. So instead of having to go out and make a major trade before the July 31st trade deadline, maybe Severino is that trade that they don’t have to make, and that is a healthy ace coming back. But again, he’s been out so long, it’s going to take some time to get the rust off. But all that really matters for the Yankees is whether he’s throwing like an ace when October rolls around. If he is, the Yankees get a tremendous boost.

DIRECTV: As for Eovaldi, do you think Boston throws him on the end of the starting rotation or puts him in the pen as a reliever?

TK: I think he starts out in the rotation because that’s what he is and that’s what he was signed to do. But he has proven, including in last year’s World Series, that he can pitch in relief and at the end of the game. He’s got a tremendous arm and even though he’s had some injuries, he seems to always come back from them. So I think they start him out in the rotation. But I wouldn’t be shocked if they needed help late in games down the stretch or in October, if they said, “Well, he can pitch in relief…” Very interested to see how that’s going to work.

3) Who are two or three young players that are having a great start to the season that most fans don’t know much about yet?

TK: Well, everyone knows Vlad Guerrero, Jr. and Fernando Tatis, Jr., but Mike Soroka for the Braves is just tremendous, ERA under 2.00 most of the season, really young, and fits in beautifully on that staff, especially now that they’ve added Dallas Keuchel, another veteran who can help this guy along. Really bright future for him and a stunningly good start for somebody that young. Chris Paddack in San Diego who was acquired in the James Shields trade, has really worked out well. They’re limiting his innings to keep him sharp, but he’s got a great future. I’m not sure everyone understands how good that guy’s going to be. And then Eloy Jimenez, who came over from the Cubs in the Jose Quintana trade. He’s got two home runs of over 460 feet this year, so there’s some serious power there, and he’s got some speed, and he’s one of the future stars of that organization. Those are certainly three young guys to keep your eyes on.

4) The Twins, Astros, and the Dodgers are dominating their respective divisional races. Do you see anything getting in their way?

TK: I think Houston’s going to win its division easily. Same with the Dodgers. But I think the Indians have a run left in them and they’ve already started it, and I just can’t believe that Minnesota is this good, but I think at the end of the season the Twins are going to win that division. They have tremendous power. They’re demonstrably better than they were last year. But I think Cleveland makes a run if they can’t get their starting pitching healthier than it is now.

DIRECTV: Do you see any divisional race coming down to the final weekend in September?

TK: Several of them could, but I’ll take the National League Central. I don’t think the Cardinals or the Brewers or the Cubs are going to just run away, and yet all three are good enough to stay right in there. At the beginning of the year, I picked three teams to come out of the Central to make the playoffs, and for the moment I’m going to stick with that. Last year that was a three-team race until about eight or nine days to go in the season. I can see the same thing happening this year. Again, I wouldn’t be surprised if three teams from the Central make the playoffs.

5) The Dodgers, Astros, Twins, and Yankees are on pace for 100-win seasons. Is this finally the year we have four 100-game winners?

TK: No. I think the Astros will win 100. I think the Dodgers will win 100. But I think the Yankees and Red Sox will beat each other up enough so that neither one wins 100. And I don’t think the Twins are good enough to win 100. I like the Twins and like what they’ve done, and they do play in a weak division, but I think they’ll win in the 90s and win their division. So I think we’ll only have two 100-win teams as opposed to three last year which, of course, was the first year in the history of the American League with three 100-win teams, and it was the first year that the Yankees and the Red Sox each won 100 games in the same season.

DIRECTV: Do you think we’ll ever see four 100-win teams in the same season?

TK: I think we will, and I think it’s a little troublesome because the gap between the worst teams in baseball and the best teams in baseball is just about the widest gap I’ve ever seen. Last year, the gap between the best team, the Red Sox, and the worst team, the Orioles, was the biggest gap between first and last, as far as wins go, since 1962. That’s not a good sign. So, yes, I think that sooner rather than later we’re going to see four teams win 100 games while other teams are rebuilding, trying to get good. But in order to get good they have to get really bad, and that’s where several teams are headed these days.

BONUS QUESTION: Can you give us one of your #quirkjians that you haven’t tweeted out yet?

DIRECTV: We’ll have to let Tim Salmon know he’s no longer the leader in that category.

TK: Yes, and I’m sure he won’t be thrilled either way.