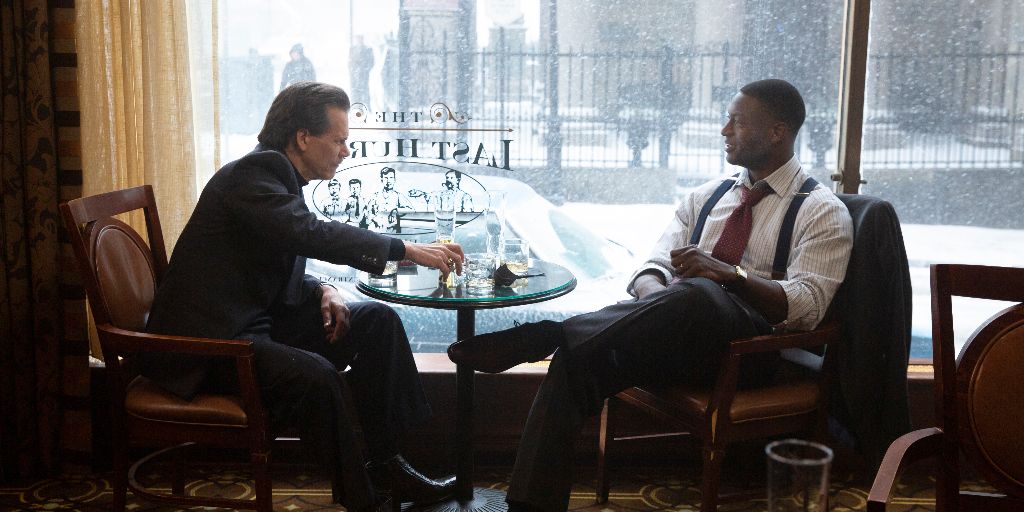 5 Questions with City on a Hill’s Aldis Hodge

In this edition of DIRECTV Entertainment's "5 Questions", we talk to actor Aldis Hodge, co-star of the new SHOWTIME drama, "City on a Hill". A gritty drama set in racially fraught 1990s Boston, a tough Brooklyn District Attorney (played by Hodge) teams up with a corrupt local FBI agent (played by Kevin Bacon) to tackle the city's endemic crime. Hodge talks to us about the appeal of the show for him as an actor, the challenging themes of the series, and his character's complicated relationship with his wife Siobhan (played by Lauren E. Banks). Catch SHOWTIME's newest drama, "City on a Hill" this Sunday, July 14th, at 9PM ET/6PM PT on SHOWTIME on DIRECTV.

Aldis, “City on a Hill” is an intense procedural that recreates the era of the “Boston Miracle”. What was appealing to you about being part of this story as an actor?

City on the Hill is an exposé into the blood and guts and rawness of what that city is. That town, Boston, back in the 90s… we use the layout of the criminality, politics, law, the justice system to really expose what this life is – the hardships of people robbing Peter to pay Paul just to get by. And then you have people trying to play Robinhood. For someone like Decourcy, to fight the good fight, he’s up against an almost insurmountable task, and may not be fully equipped for it. City on a Hill is about these people representing different parts of the DNA of the city.

I like how rough it is, how raw it is, how grungy it is. I haven't seen a show in a long time that really pushes at the throat of the truth and throws it in your face. It gives no regard for trying to be safe. And that's the fun of it for me in that you never know what will happen because the truth will always surprise you. We have the backdrop of cops and robbers and crime, but at its core, it is about what survivors will do to survive.

The series encompasses so many large themes—race, justice, municipal corruption. How do these issues overlap across the story?

It all happens by following the different characters. Decourcy Ward is coming from Brooklyn, he's an assistant district attorney coming to Boston and dealing with all of it. He’s dealing with a judicial system that is unfair. There's a structure to the madness, but he's trying to break it. He really wants to come in, knight in shining armor, based on his morals and ethics to clean up the town and do it his way, but nobility doesn't exactly get the job done. He might have to step away from who he knows himself to be.

He really believes in the idea of justice, his ideals and he believes in people. Unfortunately he steps into a system where good people are used to prop up the agendas of not so great people in high positions. Politicians, police officers, judges, lawyers… He is still a man of great measure and great nobility in terms of what he believes in. He's just figuring out how to accomplish that in a different way.

In this show, racism is very present as a vehicle, almost to a degree as its own character. We get to explore that as it sets the tone for a divide. You look at Decourcy, who is black and working in an environment he wants to believe in...he wants to have hope and faith in the environment that he works in, but also realizes he's a target. And that's why he has to be there. That's why. Because he has to be the change that he wants to see. And he has to be the person who believes in his people and disproves the statistics and disproves all of those rumors. He can only do so much by himself but he has to work against the machine, within the machine.

He comes from Brooklyn, and being in Boston he's got to go out there and get his hands a little bit dirty because Boston's a different playing field. He’s made it, but to make it doesn't mean to leave your people behind. It doesn't mean to step into a whole new world and acclimate to that. It means to now step into this unknown world and make it acclimate to you and that’s what he's doing in Boston because he believes in the people there, the people that are being beat up on. The people that are considered the statistics. The people that look like him.

He’s also starting to understand you got to be a shark to swim with sharks sometimes. It doesn't mean you have to be a bad shark, but it doesn't mean that a good shark doesn’t have to do bad things every now and then. Even when I was doing research talking with a real DA, he said, look you've got to win a couple of battles to win the war. You've got to know which one of those battles is worth tossing and which one is worth keeping. And for Decourcy, he's figuring that out and we get to see that.

How does your principled ADA Decourcy Ward become allies with a corrupt cop like Jackie Rohr? In some ways, he’s a product of the system Ward is trying to tear down.

So Decourcy is noble by nature. He’s also a confident, but curious man, so he’s gonna play with fire a little bit. He’s going to test the limits and throughout the series we get to see if he goes too far. He’s trying to hold on to his morality, but it’s really difficult to do when everybody around you is crooked and the only way to survive is by being crooked. It’s almost like you’re fighting a losing game by being straight.

Then dealing with Jackie. I mean that's a roller coaster every single day but he's learned how to play Jackie at his game. You never really know with these two because on paper it always looks like they would never be in the same room together. It does seem like they'll be using each other but then they have these really great moments where it feels like brotherhood, real brotherhood. I think Jackie has a few more tricks up his sleeve than he's letting on and it's fun for me because of course you know Kevin is killing it. It's been a really grand experience being able to work with what he's bringing and how he's discovering and shaping the role. It informs me in terms of what other options I have to play with in developing Decourcy.

I think they're going after the same thing for two different reasons. They are very agenda based people and the common goal is I need to get mine.   But they are two titans battling it out and the thing about them is I don't know what's going to happen next and I like that.

Ward is married to Siobhan Quays (played by Lauren E. Banks). There’s a tension between Ward’s desire to work in the criminal justice system and Quays smoother entry into corporate law. How does that dynamic impact the storyline?

Decourcy has a very strong and present wife Siobhan played brilliantly by Lauren E. Banks, my other on-camera partner in crime. I love that you see she's got a separate world going on and the way it affects Decourcy. We get to see how he's a man at home and not just a brother at the job. That's interesting, because it feeds into who he is at the job, and then he does take the job home and we see how he gets to recover and figure out how to be a husband again. As he’s struggling with how to get the job done, we get to see how it affects him, his life, his wife, and what he thinks about the field that he’s playing in, this judicial system, Boston, his whole life…   He realizes he has to become a shark, but he's trying to maintain himself. He’s trying to look in the mirror and see something familiar every day he comes home.

Through these different characters you have a full roster of perspectives that make up the show. In their relationship they get to touch on real subject matters, real issues back then, that are still current now. We get to expose the real conversations that may go on behind closed doors and it resonates because we get to see people who are actually trying to figure it out, but from a place of love. I think they can teach so many things about how we deal with these situations. I love the fact that Siobhan is fiery. She stands her ground and it says a lot about Decourcy. He's a very strong individual, especially in this world where he feels like he's trying to be himself, but he also has to break some rules and play a little dirty to get the job done. His wife is a representation of him as much as he is of her. She's very strong, very confident and you can see why. You can understand why they chose each other and in every episode I'm learning more about their relationship and it's part of the thing that makes me flip pages faster trying to figure out where they’re going.

Catch SHOWTIME's newest drama, "City on a Hill" this Sunday, July 14th, at 9PM ET/6PM PT on SHOWTIME on DIRECTV.

Don’t have SHOWTIME? Upgrade today and get the best of SHOWTIME including City on a Hill!