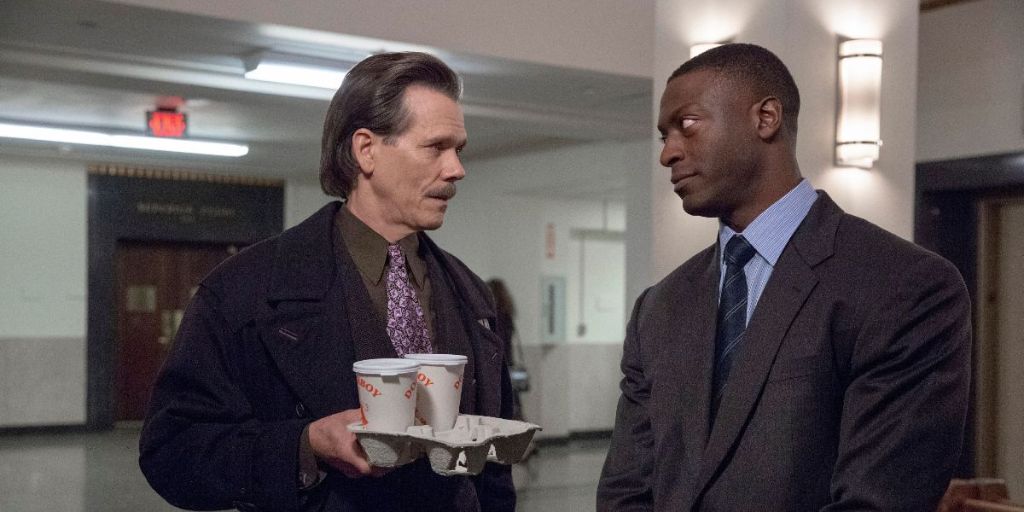 5 Questions with City on a Hill’s Kevin Bacon

In this edition of DIRECTV's "5 Questions", we talk to actor Kevin Bacon, Hollywood icon and co-star of the new  SHOWTIME series, "City on a Hill". The civic drama has drawn critical praise for its no-holds barred depiction of 1990s Boston, at a time when violence and corruption were driving the city to the edge. Executive producers include storied Boston natives Ben Affleck and Matt Damon, and the the drama is rich with local touches. Bacon talks to us about what drew him to the script, the series, and his character's relationship with that of co-star Aldis Hodge. Catch SHOWTIME's newest drama, "City on a Hill" this Sunday, July 14th, at 9PM ET/6PM PT on SHOWTIME on DIRECTV.

Kevin, “City on a Hill” is an intense show, riven with conflict and confrontation, set in 1990s Boston during a particularly violent era of city history. What drew you to such a fierce storyline?

Well, it’s a very gritty show and when I first decided to become an actor, it was the early 70s and the films that were being made at that time from Scorsese and Sidney Lumet and John Cassavetes had a certain grittiness, you know? Kind of an urban edge that was really what I loved. Those were the kinds of films, and the kinds of actors that made me want to be an actor.

I wanted to be in that kind of a world. I think it's a great time for television and television is strikingly beautiful. A lot of the concepts are kind of mind blowing, with the worlds that television is taking us too.

One of the things that is the most exciting to me about the show, is that you have plot and story line and good guys and bad guys and a crime that's trying to be solved and it gets down and dirty. But, the smartest part of the show, is there's a lot of going home with these characters, and I always define whether or not a character is interesting for me to play based on that. That's a big piece of it, do you see him at home? If I only see my character in my work or in my uniform, or in that mode then it's really hard to learn too much about who he is.

And when you go home and you see a family life and you see children and relationships and parents, that's when you can really develop character and develop interesting story lines.

The aesthetic of Boston pervades the show. The tough Boston idiom pervades the script. Not being a Boston native, how did you prepare to inhabit a character like Jackie Rohr?

I’ve actually shot in Boston quite a few times before, and we shoot partly in Boston, so I have a real connection to it. I grew up in Philly and it's funny the similarities between Boston and Philly. They're sort of these satellites in a strange way of this Metropolis. When I first went to Boston and started working there it felt very familiar to me. Chuck MacLean has an incredible memory for such a young guy for all kinds of history. I mean he just has this hard drive in his brain that's filled with these stories and quotes and pieces of Boston culture and history whether it's hypothetical or not. Urban legend and all of these kinds of things just spill out of him as a writer.

It’s a big part of this show, and also a big part of my character. I’ve done a lot of characters in Boston that are kind of strong, silent types, but this is a guy that can’t shut up. I like playing this desperation that he feels because he’s a man who’s feeling like “am I still going to be relevant? Is this my last chance to make my mark?”

The themes of racism, misogyny, government corruption are immediately apparent. In some measure, your character embodies all of them. And yet, as an actor, you need to sympathize and understand your character. Was it difficult to get into the psyche of such a polarizing figure as Rohr?

The voice of Jackie was incredibly clear to me from the first time I read the pilot. Chuck MacLean has found that voice in spades. I find that even though he’s an incredibly verbose character it's really easy for me to learn Jackie's lines because they are so well laid out, and that's a clue that the writing is good. Can I relate to him? Well...listen, it's really not about me making a judgment about whatever he's doing being right or wrong. It's really about Jackie feeling like what he's doing is right or wrong. Whether or not he's justified. So that's kind of all I go back to. I can have my own opinions about a man who would do these things, which are terrible things, but that is not as important as the feelings that I have when I'm walking in those shoes. And in his mind, probably 95% of what he's doing is justified. He’s a big proponent of the ends justifying the means. It’s going to be about when do we get to that moment where he starts to doubt what he's doing and the road that he's taking - the life that he's lived, the people that he's hurt, and the decisions that he's made.

The contrast between moral absolutism and flexible ethics are represented by Assistant District Attorney Decourcy Ward (Aldis Hodge) and your FBI agent Rohr, respectively. And yet these two characters become unlikely allies. How does that happen?

You know you could look at the character of Decourcy and say he's the honorable man, he's the hero. And I think that Jackie looks at Decourcy and says, I see someone that has ambition. I see someone that wants to go places. Now maybe Jackie can apply some of his trickster ways to this man's life and somehow infiltrate him and use him. And time will tell whether or not he’s successful with that.

It might be more using each other than teaming up, but that's something that we're constantly questioning. Has Jackie found someone who is ambitious enough that he can relate to his view of the world, or is he playing him? The backbone of the show and the story is the relationship of these two guys, that shouldn’t have one. I mean there's nothing about these two men in terms of their world view that should put them in any kind of a partnership, and yet, they are willing to be in the same room together. They both are willing to drink together. They call each other late at night and you kind of go what is that about? What is that about?

How did the fact that you’re recreating actual history of the city impact your preparation and acting for the series?

Boston is a fantastic backdrop with everything that was going on historically throughout the years in terms of corruption and all that kind of stuff. But it’s really evolved into a story about people who are in these very, very crucial times in their lives. Super important times, what I like to call ‘a passage’, when the sh*t is hitting the fan for everybody. For my wife’s character, for me, for Decourcy, for his wife, for all of the Ryans. Every single character has some big thing personally that’s happening. It’s a crime show, but it’s really more about what’s going on personally with this bunch of people.

Catch SHOWTIME's newest drama, "City on a Hill" this Sunday, July 14th, at 9PM ET/6PM PT on SHOWTIME on DIRECTV.

Don’t have SHOWTIME? Upgrade today and get the best of SHOWTIME including City on a Hill!