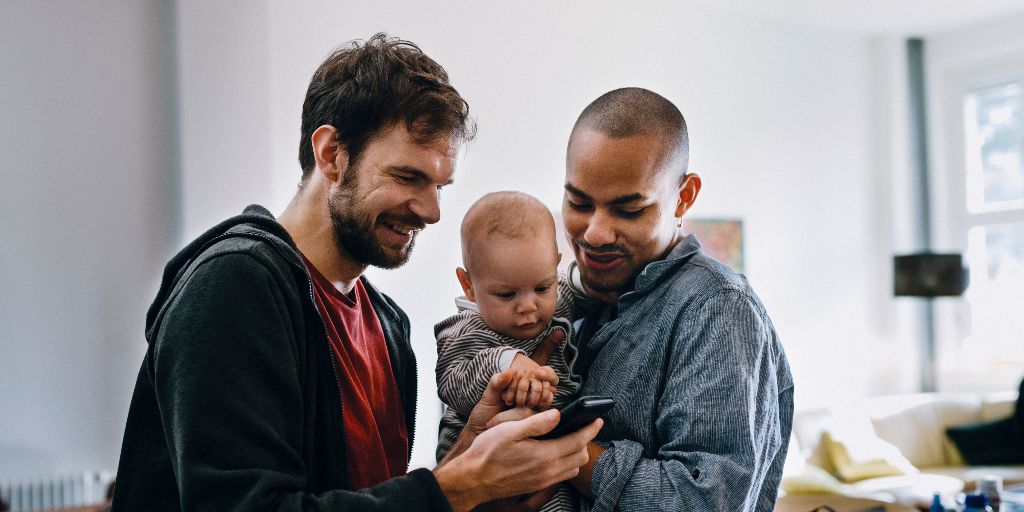 With popular television series like ABC's "Modern Family" and Netflix's "Grace and Frankie" featuring same-sex parents, it's easy to forget that depictions of LGBTQ families on the small screen were almost nonexistent not too long ago. These five series broke ground by including LGBTQ dads, proving to mainstream audiences what the LGBTQ community has long known: Fathers come in every shape, size, and color of the rainbow.

HBO broke boundaries with its portrayal of gay couple David Fisher (Michael C. Hall) and Keith Charles (Mathew St. Patrick) in "Six Feet Under", its critically acclaimed, darkly comedic drama about the Fisher family and their namesake Los Angeles funeral home. At the show's start in 2001, David was burdened by his sexual orientation and the pressure to live up to his father. By "Six Feet Under"'s fifth and final season, David is almost unrecognizable: He's out of the closet; happily coupled with Keith, a gay black man; and the father of two adopted children. David and Keith's relationship isn't without its ups and downs, but their inclusion in the series as an interracial same-sex couple was remarkable. In 2005—10 years before marriage equality would become legal nationwide in the United States—such layered representation of fully realized gay characters was almost unheard of.

"I didn’t want to continue the perpetuation of gay characters that we’ve seen on television and in film," St. Patrick recalled to ET Online in 2015. "I know about stereotypes. I’m a black man and I live that life every day."

For many Americans, Cam and Mitchell from "Modern Family", ABC's long-running mockumentary-style family sitcom, were some of the first examples of gay dads to appear on their TV screens. Viewers fell in love with Cameron "Cam" Tucker (Eric Stonestreet), a stay-at-home-dad turned football coach, and Mitchell Pritchett (Jesse Tyler Ferguson), a lawyer, as they navigated the highs and lows of raising Lily Tucker-Pritchett, their adopted daughter. Though the pair seems mismatched at times, Cam's flamboyant, outgoing demeanor balances out Mitchell's more mild-mannered, reserved parenting style. The dynamic duo's individual quirks also challenge stereotypes about LGBTQ characters, with Cam loving football and athletics as well as musical theater. Their journey through the trials and triumphs of fatherhood made for 11 riveting, laugh-filled seasons of television. The series wrapped after more than a decade this April, but Cam and Mitchell's legacies as cherished LGBTQ protagonists lives on.

This ensemble family drama, which ran on ABC from 2006 to 2011, prominently features gay couple Kevin Walker (Matthew Rhys) and Scotty Wandell (Luke Macfarlane). Though Kevin, a lawyer, has some rocky first encounters with Scotty, who is a principal witness on a case he works, both men eventually hit it off. Over the course of "Brothers & Sisters"' five seasons, Kevin and Scotty work through some major highs and lows, including breaking up and eventually getting back together. In Season 4, they decide to have a child via surrogacy. That journey doesn't go smoothly (this is a drama, after all). However, by the series finale, Kevin and Scotty have defied the odds and become a family of four. Rhys was praised for his portrayal of Kevin, and ABC scored major points among LGBTQ advocates for including a gay main character whose sexual orientation wasn't a "challenge" for him to overcome.

The fathers portrayed in this smash-hit Netflix series, which premiered back 2015 and will air its seventh and final season in 2021, are about as nontraditional as it gets. Lawyer duo Sol Bergstein (Sam Waterson) and Robert Hanson (Martin Sheen) upend their lives by revealing to their wives and their adult children that they've been in love and having an affair for years. The hilariously messy start aside, "Grace and Frankie" depicts the aftermath of that life-altering admission with nuance, care, and plenty of laughs. Is dropping a bomb like that an easy thing for Sol, Robert, or their families to come back from? No. But the honesty, painful as it may be, allows for growth, and their lives—as well as the lives of their soon-to-be-ex-wives and the show's true stars, Frankie Bergstein (Lily Tomlin) and Grace Hanson (Jane Fonda)—are better for it. "Grace and Frankie" is also one of only a few television series to depict gay fathers of adult children, making for a father-child dynamic with its own unique challenges and filling yet another void in onscreen representation of LGBTQ families.

Though it only premiered this year, NBC's "Council of Dads", based on the novel of the same name by Bruce Feiler, has already made a significant contribution to LGBTQ representation in television. The series—which follows the Perry family's five children, their mother, and their "council of dads" formed after their father's death from cancer—features Dr. Oliver Post (J. August Richards), a gay black man. As the late Scott Perry's best friend, Oliver is chosen to be one of the dads on the council and help raise the five Perry siblings alongside the newly widowed Dr. Robin Perry (Sarah Wayne Callies). Although Oliver's path to "fatherhood" is anything but conventional, his inclusion in the series marks a major moment for LGBTQ people of color on television. It even inspired his actor, Richards, to speak publicly about being gay for the first time after the series premiered.

"[The "Council of Dads" writers] allowed me to bring this intimacy of what I know about the experience of being a black gay man to the screen," Richards told Entertainment Weekly shortly after coming out via Instagram Live. "I can never thank them enough for that."