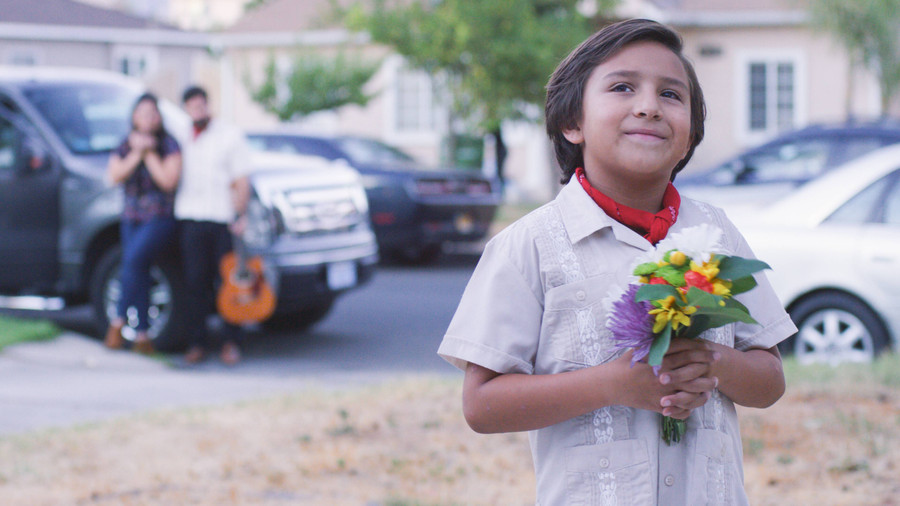 Kids absorb language like a sponge absorbs water. So whether or not your kids speak Spanish just yet, this selection of family-friendly movies and shorts is sure to pique their curiosity and have them eagerly waiting to learn the basics of Spanish and beyond. Have a look, or mirálo aqui:

Recommended for ages 8 and up, “The Footballest” follows young Francisco and his underdog teammates as they strive to keep soccer going at their school. To do so, they’ll have to win at least one game — for once — and unexpectedly solve a mystery along the way. With a kooky cast of characters who join forces to find out what’s going on and who’s set against them, the kids discover the value of friendship and teamwork in this “fun and lively adaptation of the popular Spanish children’s-book series” by Roberto Santiago.

“Turu, The Wacky Hen” tells the story of the world’s only chicken who can’t seem to lay eggs — but that’s because fate has bigger things in store for her. After facing ridicule from her coop-mates, Turu’s life takes an unexpected turn when she becomes a circus star and faces off with the greedy, evil Armando Tramas.

“The dancing, songs and assorted circus-y antics strike a nice balance between the fantastic possibilities of the cartoon form and enough verisimilitude to keep more literal-minded kids engaged,” according to The Guardian. “And it’s a nice touch that this very modern, ethical circus won’t use animal acts because animals can’t give their consent – a rule that’s cleverly circumvented here by having a sentient, talking chicken as its protagonist.”

In this heart-warming story, a little boy named Nicolás, who happens to have Down Syndrome, is sent to live with his loving grandparents after losing his mother. Every year, his mother made him a new and different costume to help him face the world and create some magic of his own. When his cousin David needs help overcoming his nightmares, Nicolás knows just what to do: enter the realm of dreams and restore order to the chaos — and peace to David’s sleep.

Directed by Ana Laura Calderón, “Mezquite’s Heart” tells the tale of Lucia, a young, indigenous girl, who lives with her father and grandparents in a small Sonoran village. Her father, a harpist, is still mourning the loss of his wife, as Lucia tries to comfort and connect with him. Her dream is to play the harp, like her dad, but it’s an instrument traditionally reserved for men. When her grandmother sees how much it means to her, however, she starts teaching Lucia to play — going against the beliefs of her people but opening the girl’s heart in turn.

“El Americano: The Movie” is the first major animated production to come from a collaboration between studios in Mexico and the United States. It follows the story of Cuco the parrot, as he heads to Hollywood to ask the titular TV superhero for help in winning back his family’s circus from a gang of bully birds. Featuring the voices of Edward James Olmos, Cheech Marin, Gabriel Iglesias, and Rico Rodriguez from “Modern Family,” it’s a flick the whole family can enjoy.

“One For All” shares an important lesson with viewers of any age when a substitute teacher arrives at a town completely new to him to take on a class of new students. What he doesn’t know is that one of them has been out sick with a serious illness, and it’s up to him to help reintegrate the child once he’s ready to return to school. The rest of his classmates aren’t so keen to have him back in this “inspiring dramatic feature about forgiveness and overcoming obstacles both inside and beyond school walls.”

In this 12-minute short, a “Mexican-American boy learns about the tradition of serenading, and why demonstrating romantic affection proudly, publicly and through song is such a treasured Mexican custom.” But when he asks his parents about whether there’s a song for a boy who loves another boy, at first they’re not sure how to respond. Will they honor their son or hold fast to tradition?

In this brief narrative, an 11-year-old boy, who loves wrestling, must use his vivid imagination to overcome bullying and make it through the most difficult weekend of his young life. “Directed and co-written by Mark Nickelsburg, this short film contain[s] everything a longer film would strive for, including characters who tug at the heartstrings, scenery that evokes strong emotions, and...action-packed glimpses into a world of excitement and power.”

In Jazmin Aguilar’s debut short, set in Mexico, two siblings find a letter that they think may explain their father’s absence. Twelve-year-old Marcela’s older brother takes it from her in anger, and to convince him that she’s ready to read its contents, she shares a scrapbook that details her imaginative daydreams as to why their father had to leave. “To write both characters I channeled my pessimist side and the other that was full of wonder,” Aguilar says in her Director’s Statement. “Though the story setting is niche, I hope the subject matter universally relates to people who have dealt with loss or abandonment. No matter their ethnicity, or sex.”