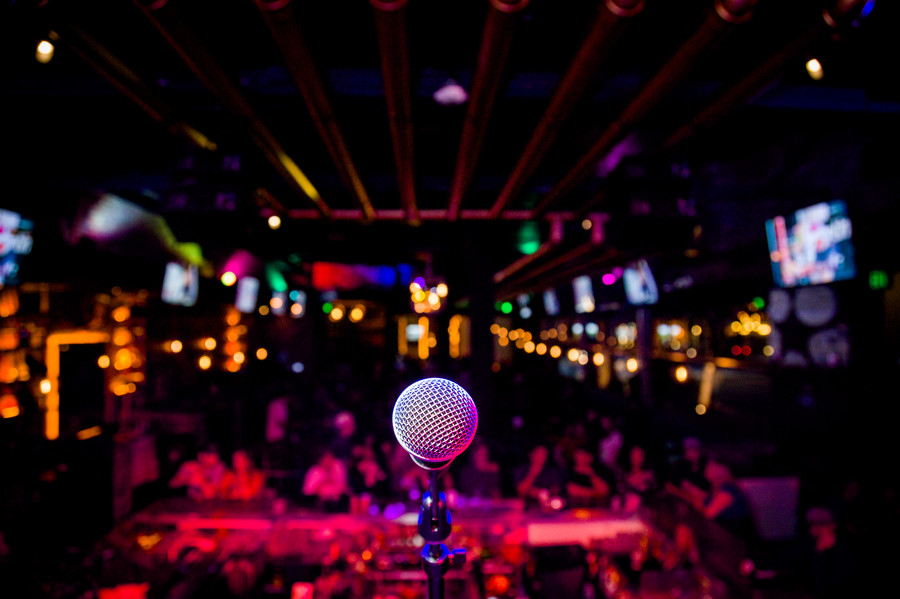 Whether it's in English, Spanish, or a mix of both, it's a good thing laughter goes beyond language. If you ask us, the following Latin American stand-up specials — all available to stream now on HBO Max — are universally hilarious.

HA Festival: The Art of Comedy

Hosted by Anjelah Johnson, this HBO Max original is a multi-act packed hour-long stand-up extravaganza featuring the funniest Latinx comedians working today. With sets from Gina Brillon (who also has a special highlighted below), Monique Marvez, Carmen Lynch, and more — along with drop-ins from the likes of Eva Longoria, Eugenio Derbez, Danny Trejo, and other Latinx stars — this best-of-the-best compilation of Latin American comedic talent is one to watch right now.

The world’s top Latin American comedians come together in this eight-episode stand-up show. With each episode featuring two, three, or four comics speaking in English, Spanish, or a mix of both, this collection of comedy works to showcase these rising stars, sharing laughs with a wide audience. With a live tour in the works (that has been postponed due to COVID-19), new and returning fans will even get to see their favorite performers up close and in person sometime down the road.

Nick Guerra: Love Me At My Worst

One of a few “Entre Nos” favorites to return with his own half-hour special, comedian Nick Guerra’s “Love Me at My Worst” unveils his views on women, romance, nightlife, and video games, among other topics  —don’t be fooled by his slicked-back hair and fitted suit, since all his stories highlight his less-than-angelic behavior. Stream now to see why this funny man — who’s also appeared on “Last Comic Standing,” “Gabriel Iglesias Stand Up Revolution,” and “Stand Up & Deliver” — earned his own solo show this year.

My Favorite Shapes by Julio Torres

With a 100% rating on Rotten Tomatoes, comedian Julio Torres — who writes for “Saturday Night Live” and also stars in and helped create “Los Espookys” — has achieved something rare with his far-out special “My Favorite Shapes.” Dressed in a metallic suit and juxtaposed against a futuristic, pastel stage, the performer spends most of the show seated at a conveyor belt that brings forth a variety of personal objects that serve as a jumping-off point for fantastical stories, anecdotes, and jokes. The Atlantic calls Torres a “rare stand-up comedian who tests the limits of the genre by deliberately considering and challenging every aspect of his act.” Well worth a watch.

Another “Entre Nos” alum who’s toured with Gabriel “Fluffy” Iglesias, actress-writer-comedian Gina Brillon is no newbie to the comedy scene. Before taking to the stage in the hilarious “Easily Offended,” she starred in another special while appearing in sitcoms (“The Conners” and “Kevin Can Wait”) and late-night shows with the likes of Chelsea Handler and Seth Meyers. In her new special, she covers everything from the appeal of Southern accents to cruise-ship buffets, social-climbing spouses, and people who can’t shut up.

Seen in Episode 6 of “Entre Nos,” Erik Rivera returns to HBO Latino with a special that centers on his unique worldview as an American-born Latino. “Super White” explores his thoughts on parenting and married life — his wife is white and their kids may or may not be learning Spanish (gasp!) — as well as what it means to be a Latin American living in the U.S. today. “I’m walking that fine line of what it means to be American in this country but not losing my identity,” Rivera told Remezcla. “I’m going to stay true to myself, but in the end, we all start blending.” One thing’s for sure: this “Stand-Up 360,” “Off Script” and “Latino 101” veteran is prouder of his heritage than he’s ever been.

Jerry Garcia: It’s Not My Weekend

Jerry Garcia, “who looks more like a Mexican Jimmy Fallon than the late Grateful Dead frontman” according to Decider, is yet another “Entre Nos” alum to win his own half-hour spot in the limelight. The single dad covers the highs and lows of parenthood, dating, and life in general in this high-energy, laugh-out-loud comedy special.

This list’s final “Entre Nos” veteran is Orlando Leyba, who was born in Puerto Rico and raised in the Dominican Republic before making it to the United States with his mom. He’s been on “LaffMob’s Laff Tracks,” “Gotham Comedy Live,” and “The Tonight Show Starring Jimmy Fallon,” and he was named a Comic to Watch at the 2018 New York Comedy Festival. Here, Leyba steals the stage with his funny takes on life in his one-man stand-up special (and HBO Latino’s first special ever), “Adorable.”

In 2017, George Lopez returned to HBO for his fourth solo stand-up special, which aired live from the Kennedy Center for the Performing Arts in Washington, D.C. In this politically-charged show filmed one year into Trump’s presidency, the Mexican-American comedian makes no attempt to hide what he thinks about number 45 and his plans for the border wall, about which Lopez simply says: “We’ll get over it.” Fans, feel free to also stream 2007’s America’s Mexican, 2009’s Tall, Dark & Chicano and 2012’s It’s Not Me, It’s You.