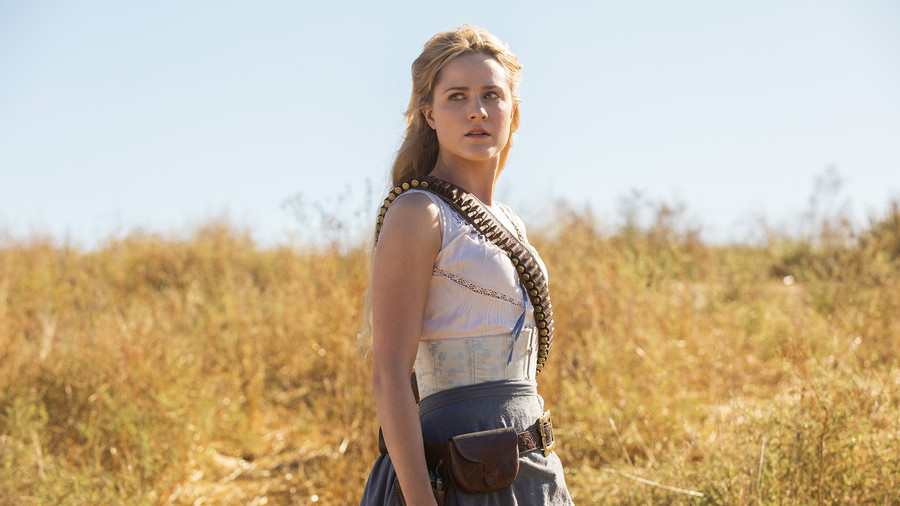 Before HBO’s Westworld began, there was speculation about the complexity of the first season’s female characters. Their categories appeared to represent action-genre stereotypes we’ve seen in entertainment for decades: the morally virtuous woman who never feels rage, the lusty vamp with no real ideals of her own, and the seemingly emotionless career woman.

But Westworld’s female characters haven't stayed in any preconceived role for long — much to the thrill of the cast and fans alike. Here’s a refresher on when the women of Westworld exceeded and subverted our expectations about their empowerment.

(Expect spoilers for season one.)

No. 9: That moment when Elsie sneaks a kiss on Clementine.

Behind the scenes of the Westworld park inside the Delos labs, Elsie quickly glances around while working with the programming of an offline robotic host, Clementine. Then, when she's sure no one’s watching, kisses her.

For viewers, the secret kiss helps frame the series: this is a universe where women are as entitled to their desires as men — but also the characters programming the hosts are not always acting ethically. And the lines between human and non-human are ultimately less defined than the humans who are (supposedly) creating them would like to admit.

No. 8: Every time we oscillated in empathy for Theresa.

She’s a dedicated career woman and Head of Quality Assurance with a warmth reserved only when she is alone with Bernard, with whom she is having an affair.

Us as viewers: Aww, she might actually really care for Bernard!

Also us as viewers: Oh, wait. She might crush any hope the hosts have of achieving independence and consciousness! But she’s ALSO just trying to do her job!

WHY, THERESA. Why must you represent professional struggles every working woman has had but doesn’t want to think about. WHY.

No. 7: When you realized Charlotte is *THE* executive director of Westworld’s board.

As benign-looking (and young) as she first appears, Charlotte has just had her ambitious initial dreams of owning all of Delos’ priceless data toppled. But she may just be ready to build from the ground up again in season two, whatever that means for the hosts.

Eventually we learn the park’s most badass outlaw is perhaps no man in Westworld — but the merciless Armistice. And her tattoo is as singular as the destruction each layer of ink represents.

No. 5: When Clementine got ready to annihilate anything in her path.

Brutally beaten for the sake of a company demo, the saloon's robotic host Clementine unexpectedly turns violent against the male host who has just assaulted her: she smashes his head into glass, blood still gushing from her own nose, her petticoat and saloon curls barely ruffled. When Clementine does not respond to system commands to shut down, she’s finally shot and decommissioned. But little do we — or most Delos management — know that their decision to replace the original Clementine with a different host model will have irreversible impact.

No. 4: When Dolores gradually awakens no longer a distressed damsel.

She’s our central point-of-view throughout season one, but we eventually realize she is far more than a single perspective and much more than a pioneer sweetheart archetype on-loop. Though the show chronicles Dolores’ and Maeve’s pathways to potential consciousness, Dolores is one of the oldest hosts in the park, and so her route through “The Maze” is more circuitous.

In moments both terrifying and moving, we see Dolores slowly awakening to the repetition of her reality — from swatting the fly on her neck in the first episode as her first act of violence, to confessing to William she secretly feels the world is “calling to her,” to her metamorphosis (even if programmed) in Pariah, in which she asserts her own way out of a dangerous escape. More than a puppet for violent action, Dolores may soon even hear no one’s voice in her head but her own.

No. 3: When Maeve is the first host to realize she can cheat death.

From the beginning, we learn that Maeve, as Elsie says, is a “quicker study” than almost all other hosts in the park. But Maeve’s narrative arc is broader than almost anyone expected. From her seemingly predictable origins as madame at the Sweetwater saloon, Maeve begins questioning her reality as she’s haunted by flashbacks to a different storyline, a place on a farm where she’s a mother with a daughter — both murdered by The Man in Black. When she abruptly wakes up on a Delos lab table, not only does she immediately threaten the terrified male techs with a knife despite not having any remote concept of where she is — she is also the first host we know who begins to piece together “dying” in Westworld may be temporary. And may just be her means to escape for good.

The season one finale's murdering, rebellious Dolores does seem to be the 180-degree opposite from our saccharin farm girl Dolores of the show's first episode. But up until now Dolores has only been able to be a binary merging of narratives: both Wyatt and Dolores, she was exactly what guests expected, and she was also the utter antithesis. But by the end of Season one, there are hints that the dimensions between those extremes are about to be colored-in. The Maze, after all, was meant for her and her kind.

No. 1: When Lisa Joy became co-creator of one of the most acclaimed shows on television.

This is one of the most exciting aspects of the show, of note because approximately 80 percent of showrunners in 2017 were men.

Westworld returns Sunday, April 22 at 9 p.m. ET/PT on HBO. Catch up on the first season now on DIRECTV.