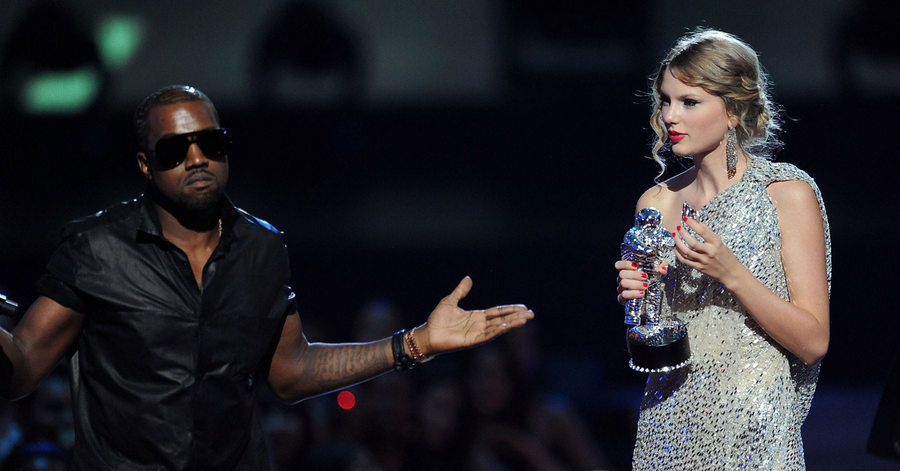 MTV's annual Video Music Awards return to New York City's iconic Radio City Music Hall on Monday (Aug. 20), so get ready for some outstanding performances. This year, Nicki Minaj, Ariana Grande, Jennifer Lopez, and Shawn Mendes are all set to take the stage in what is sure to be yet another unforgettable night.

The very first VMAs took place at Radio City back in 1984, and this will be the awards show's 17th time in the Big Apple. To prepare for what might go down — because jaw-dropping moments are kind of the VMAs' deal — here's a look back at the award show's most historic NYC moments.

1984: The performance heard 'round the world

When you hear of Radio City, you can't help but think of The Rockettes' sky-high kicks — but at the inaugural VMAs, it was Madonna putting on a show. After popping out of a 17-foot wedding cake, the Queen of Pop's stiletto fell off and her dress went up, revealing her underwear to the crowd. Her solution? Writhe around on the ground, turning "Like a Virgin" into one of the VMAs' most iconic and risqué performances of all time.

Whether it was true love, a publicity stunt, or something altogether much weirder, the fact remains that there was a time when Michael Jackson, the King of Pop, was married to Lisa Marie Presley, daughter of Elvis, the King of Rock n Roll. That time was the summer of 1994 and it was a wild scene, man. While few were sure what to make of this odd pairing and most were certain it was some off-the-wall marketing ploy to promote Jackson's HIStory that followed less than a year later, the two lovebirds decided to go public, rebuke their haters (pre-Twitter), and cement their undying love (they were divorced in '96) by kicking off the 1994 VMAs with an extremely awkward lip lock that nobody who saw it will ever scrub from their brain.

The 1995 VMAs were also hosted at Radio City, but the legendary Bon Jovi hit the stage at another famous New York spot: Times Square, where he performed a live medley of "Helter Skelter" and "Something for the Pain." The streets were almost as packed as they'd be for the New Year’s Eve ball drop.

There was no opera music at the 1999 VMA pre-show at New York's Metropolitan Opera House — but there was Blink-182 jamming out to "What's My Age Again?" and "All the Small Things," one of their earliest performances before they became one of pop-punk's most beloved bands. One year later, they were big enough to play the actual awards show, and "All the Small Things" made its second VMA appearance.

2003: An angel falling from the heavens

Long before Beyoncé and her family were ruling the Louvre, she was making epic entrances at the VMAs. At her solo VMA debut in 2003, she gracefully floated down from the Radio City ceiling to the stage — upside down, no less — to sing "Baby Boy" and "Crazy in Love." Not even gravity can stop the power of Bey’s voice.

My Chemical Romance's first live performance of "Welcome to the Black Parade" — a memorable favorite for kids who grew up listening to mid-2000s emo music — took place during the VMA pre-show atop 30 Rockefeller Plaza, the NYC building that inspired Tina Fey's 30 Rock. A small army of skeletons backed up frontman Gerard Way, quite possibly making this the spookiest VMA performance yet.

At the 2016 VMAs at Madison Square Garden, Kanye West gave a lengthy speech about his music and potential presidential run (#Kanye2020)—video above—but 2009 was when he really made VMA history by crashing Taylor Swift's spotlight. Tay was accepting the award for Best Female Video when 'Ye infamously stepped in to say Beyoncé should've won for "Single Ladies (Put a Ring on It)"—which ultimately ended up taking home Video of the Year, the night's most prestigious award.

The Monday after the 2013 VMAs, everyone was talking about Miley Cyrus twerking on Robin Thicke during a medley of "We Can't Stop" and "Blurred Lines." Who knew a foam finger could be used that way?! The controversial performance proved, once and for all, that Hannah Montana was all grown up—and likely paved the way for Cyrus to become the 2015 VMA host.

In 2013, the VMAs were hosted in Brooklyn for the first time. To honor the occasion, Katy Perry staged a boxing match — OK, more like elaborate boxing-inspired choreography — to sing her Grammy-nominated hit "Roar" by the Brooklyn Bridge. Talk about a knock-out performance.

Nick Jonas and Ty Dolla $ign threw a massive dance party inside New York's Tick Tock diner before taking their talents to the street to perform "Bacon," with an impressive block party outside Madison Square Garden. There's something so Manhattan about rapping in a parking lot surrounded by posh cars — with Duane Reade pharmacy visible in the background.

Clearly, MTV knows how to turn New York into its own musical playground.