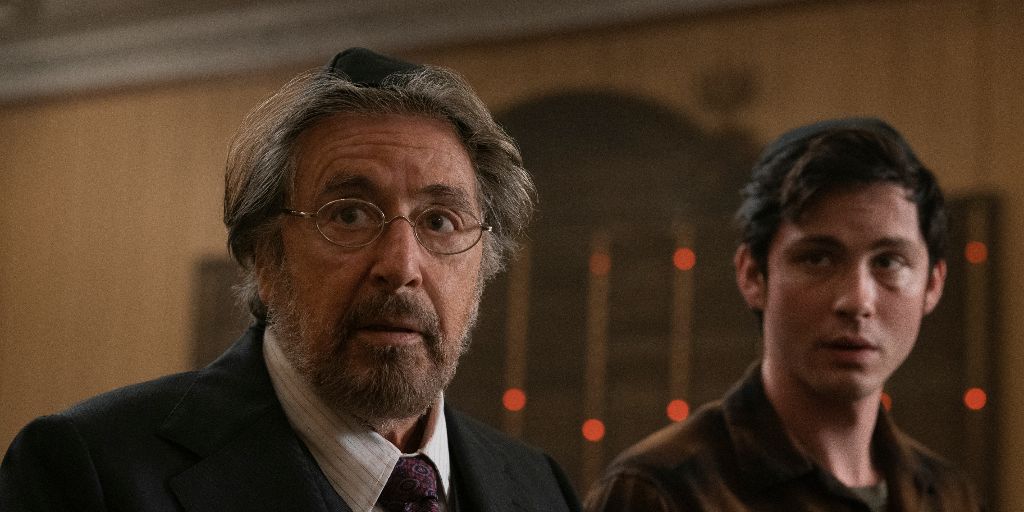 LOS ANGELES — "Is the scarf too much?"

So asked Al Pacino as he entered a Pasadena hotel suite for a photo shoot, apparently unaware that the lengthy, light-colored scarf accenting his monochrome ensemble made him the sharpest-dressed person in the room.

A few minutes later, as the gravel-voiced actor settled in to talk about his new Amazon series, "Hunters," he discussed his feelings about how it felt to be even more visible than usual in this late chapter of his career. Pacino's Oscar and Golden Globe nominations for his role as fiery Teamsters boss Jimmy Hoffa in Martin Scorsese's "The Irishman" made him a regular presence on the awards circuit during the first part of the year. He also had a featured cameo in the awards favorite "Once Upon a Time ... in Hollywood."

"Yeah!" exclaimed Pacino, his face brightening. "I'm in the conversation!"

It's difficult to remember a period during the last five decades when Pacino hasn't been "in the conversation." The 79-year-old is regarded as one of our leading actors, with a celebrated career that dates to his major Hollywood breakthrough as mob boss Michael Corleone in "The Godfather" and "The Godfather Part II." His other classic films include "Dog Day Afternoon," "Serpico," "And Justice for All," "Scarface," "Glengarry Glen Ross," "Heat," "Sea of Love" and his Oscar-winning performance in "Scent of a Woman."

Pacino has added to his impressive film resume with several acclaimed performance in TV projects, including his Emmy-winning portrayal of Roy Cohn in HBO's "Angels in America" and his turn as the beleaguered Penn State football coach in HBO's 2018 film "Paterno."

Set in the 1970s, "Hunters," created by David Weil and executive produced by Jordan Peele ("Get Out"), marks Pacino's first major role in a TV series and is a departure from his trademark depictions of larger-than-life figures both fictional and historic. Here he plays Meyer Offerman, a soft-spoken, nattily attired gentleman with a heavy accent who jokingly refers to himself as a "potato on a couch."

But underneath Offerman's low-key demeanor is a determined man with a deadly mission: He is a Holocaust survivor who now heads a group of vigilante Nazi hunters tracking down and administering lethal justice to high-ranking Nazi officials. He recruits Jonah Heidelbaum (Logan Lerman), a young man who seeks revenge when his grandmother, also a Holocaust survivor, is murdered in her home by an unknown intruder.

Q: You've done all these amazing films and also quite a few TV projects. But doing a TV series is a whole different thing.

A: Yes, I've done these HBO things from time to time, and I thought I would try this. It was a good script. That was most important. David wrote this interesting story, and so beautifully. We talked and it seemed like the right thing to do.

Q: What impressed you about the script and the story?

A: It was the chance to play something different [from what] I've ever done before. I thought it would be interesting to play this kind of person. David and I came to have an active and enjoyable creative relationship. I enjoyed how open he was, how freeing he was. Then there was (pilot director) Alfonso Gomez-Rejon, who had apprenticed for Scorsese for so many years and had a lot of interesting ideas.

Q: What was the biggest thing you had to get used to in being in a TV series?

A: Every two or three weeks, you have a new director. This is unusual and something I've never tried before. (Laughs.) But because the storyline, what it was about, was so unique, it felt almost appropriate. Almost. You don't have the time to get used to someone. Some of the directors I responded to more than others. I don't look at the footage I do. What I usually do, which I got used to doing for a while, is wait until a film comes together and then I offer feedback. My input comes then, not during the shooting, unless a director tells me I'm really on the wrong track. What I'm used to is having rehearsals. But the world has changed. There aren't many rehearsals. But I like the idea of being in the moment, turning around and saying, "What are we doing here? Where are we going?" That's kind of dangerous, which I like in a way.

Q: Did that heighten the experience for you?

A: I enjoyed it. I didn't have a hard time doing it. But then again, everyone who was behind it was accessible and whatever idiosyncratic thing I would be in, they would accommodate. It was a good feeling. I thought we all worked together. I love the kid, Logan. He was fun to be with. He works very hard and is devoted. But at the same time he's free and funny and clever. I enjoyed him.

I was home too. That was another thing. I live in Los Angeles because my youngest children are here. I like my own bed to sleep in at night.

Q: Meyer seems like such a different character from what we're used to seeing you do.

A: First, I thought the script had ingredients that gave you insight. I like to find things that get me inside myself. There was no real character to base this person on. I had to find something. The writing was so good it was obvious what David's image of this man was. I just went with it. When you've had a lot of experiences and you've done a lot of roles and you've seen a lot of people as time goes on, you find these things stay with you. They're in your conscious if not your unconscious mind. That's when it comes out, especially if you don't have rehearsals. What I like about this group is that we just started talking about what we were doing, and we liked doing that. It was fun. Discovery is fun.

Q: "Hunters" also comes on the heels of "Once Upon a Time ... in Hollywood" and "The Irishman," when you're playing more energetic, vivid people. Meyer is not that dynamic, but he has a definite power and gravity.

Q: This easily could have been "The Al Pacino Show." But it really is an ensemble.

A: Very much so. That appealed to me. Even though I'm the head of the family, it's still an ensemble.

Q: Why was that important?

A: The load is a little lighter.

Q: The tone of the series is offbeat as it goes back to this horrific moment in history.

A: It's woven through the story. It also has this eccentricity. There's this tongue-in-cheek thing that comes in from time to time. David is coming from a place, assuming that some of this story is true. It has the feeling that some of these things could happen.

Q: Between the hit films and the series, what is this time like for you? What do you do next?

A: I've always seen myself as a theater actor. When the time is over and there's nothing left, I go to plays. I don't develop films. I love film, I love watching them. But I always go back to where I started. It revitalizes me and gives me energy. I like to see where it is and experiment with this. I love to try it, but I do have three kids and that changes your life. I'm operating that cog and that's the center — my kids. It's also about the lower back. (Laughs)

Q: It sounds great. I've always been such a huge admirer of your work.

A: I have to say this. And I cannot leave this out. I'm really lucky. That's how I feel. For actors to work and go this way, it's a lot of luck.

Q: I think you've had more than luck, Mr. Pacino. But it's how you use it.

This article was written by Greg Braxton from The Los Angeles Times and was legally licensed via the Tribune Content Agency through the NewsCred publisher network. Please direct all licensing questions to legal@newscred.com.