No good deed goes unpunished on Game of Thrones, and nobody knows that better than Jaime Lannister (Nikolaj Coster-Waldau). Before he appears on-screen, Jaime’s saved thousands of innocent lives from a gruesome death by wildfire, and all he got was this lousy nickname: “Kingslayer.” For all Jaime’s arrogance and classic Lannister disdain for others, the damage to his reputation has a huge psychological impact on him. Reviled by the world for his most honorable act, Jaime blocks out the haters by doubling down on his devotion to his twin sister, Cersei.

Theirs is the same old story. Boy meets girl in utero. Boy and girl fall in love. Boy and girl have a decades-long incestuous affair resulting in three secret bastard children. That old chestnut. For years, Jaime stands by Cersei's side, determinedly looking past the fast-accumulating pile of bodies at her feet. But now, thanks in part to the redemptive influence of Brienne of Tarth, Jaime is finally stepping away from his sister towards an honorable path. Let’s take a look back at Jaime’s journey from oathbreaker to man of his word.

I Would Do Anything For Love (Sure, I’ll Do That)

As one of the seven Kingsguard, Jaime accompanies his sister, her husband King Robert, and most of the royal court to Winterfell to seek Ned Stark’s services as Hand of the King. While enjoying a little afternoon delight in an abandoned tower, Jaime and Cersei are discovered by Ned’s young son Bran, who has an affinity for climbing and a knack for being in the wrong place at the wrong time. Unwilling to risk their secret getting out, Jaime shoves the young boy out the window. That should bury it, right?

Wrong. A few days later, Jaime and Cersei learn that Bran’s expected to live, and you can almost see them start to sweat. Not long after their return to King’s Landing, Ned Stark puts two and two together: Cersei’s kids are Jaime’s, too. Ned warns her that he’s going to tell Robert, but shortly afterward, Robert dies, and Ned’s arrested and eventually executed for treason.

A Man Without Honor

Everything unravels pretty quickly after that. Ned’s eldest son Robb rallies his bannermen to avenge his father and marches south to battle, where he soon comes up against Jamie and the Lannister forces. At the Battle of the Whispering Wood, Robb captures Jaime and hauls him from camp to camp in a cage under constant guard. Unbeknownst to Robb, Catelyn Stark plans to exchange Jaime for her two daughters, Arya and Sansa. She releases him and sends her protector, Brienne of Tarth, to escort him back to King’s Landing and bring her daughters home.

Jaime and Brienne’s relationship proves transformative for him. Though he’s antagonistic and misogynist at first, Jaime grows to respect a fellow skilled warrior. He can’t help but admire her unassailable sense of honor, especially when his own has become so warped. By the time the pair are captured by Locke, a malicious bannerman of House Bolton, Jaime and Brienne have developed a mutual, if begrudging, respect. 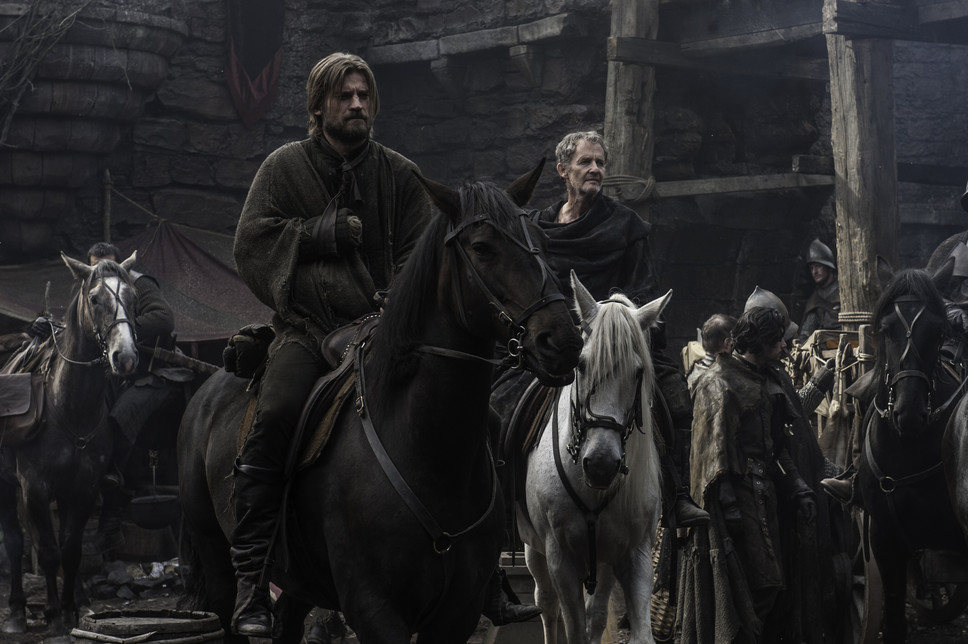 On the way to Locke’s camp, Jamie warns Brienne that the men will assault her and advises her not to fight; naturally, she ignores him. As she struggles, something plucks on Jaime’s conscience. Pity? Honor, perhaps? Whatever it is, Jaime convinces Locke that Brienne’s father will pay a handsome sum for his daughter’s safe return, thus saving her from being violated. But once again, Jaime suffers for his good deed. “You’re nothing without your daddy,” Locke taunts him, holding a knife to his eye, “And your daddy ain’t here.” Then he brings the knife down, lopping off Jaime’s sword hand.

All at once, Jaime’s entire world shifts. Famous in all the seven kingdoms for his dominance with a blade, Jamie sees his sword hand as his identity. Without it, who is he? What is his worth? In the intimacy of a shared bath (neither's choice), a broken Jaime pours out his past to Brienne. Cersei loves to point to the fact that she and Jaime shared a womb as the reason they belong together; yet here are Jamie and Brienne, naked in a steaming tub, laying themselves bare.

It’s a turning point for Jamie as a man as much as it is for his relationship with Brienne. After they part ways, Jamie learns that Brienne is in danger, and we see his first steps to redemption. He hurries back to help her and finds her in a gladiator pit, fighting a bear with nothing but a wooden sword. Undaunted, Jaime jumps in alongside her, and together they narrowly escape a grisly, grizzly death. Talk about swoon-worthy. 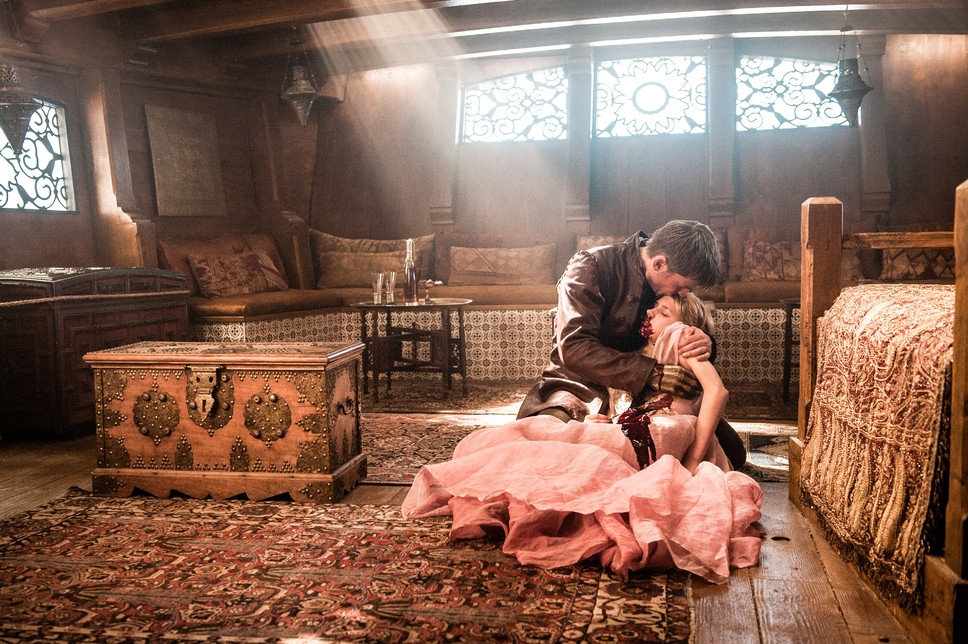 It should be noted that prior to now, Jaime's had a fairly—well, healthy isn't the right word, but, okay—stable relationship with his siblings. He forms a buffer between Tyrion and the rest of the family as the only person who doesn't blame his little brother for being a dwarf. He ended the Targaryen dynasty, ushering Tywin back into power as the father of the Queen. And he's clearly devoted to Cersei, even if he can't publicly acknowledge the fruits of their labor. Cersei even loves him in her way. After all, he's a male version of herself.

But when you're one of the best fighters in Westeros, the loss of your sword hand changes a few things. Jaime finally makes it back to his sister, after months of torture and desperation, only to be met with a mixture of revulsion and pity. Bad enough he's in the midst of an identity crisis; now Cersei doesn't recognize him, either. She wastes no time in fitting him with an unwieldy, tacky gold prosthetic, a concrete symbol of her discomfort with the man he has become.

Then, everything really goes to pot. One by one, Jaime and Cersei’s three children die horrible deaths. Joffrey is poisoned at his own wedding, and Myrcella is also poisoned on the way back from Dorne. Tommen throws himself from a window. Each death is a crack in the foundation of Jaime and Cersei’s relationship. On top of that, Jaime’s decision to take pity on their brother Tyrion leads directly to Tyrion’s murder of their father, further disintegrating the siblings’ relationship. 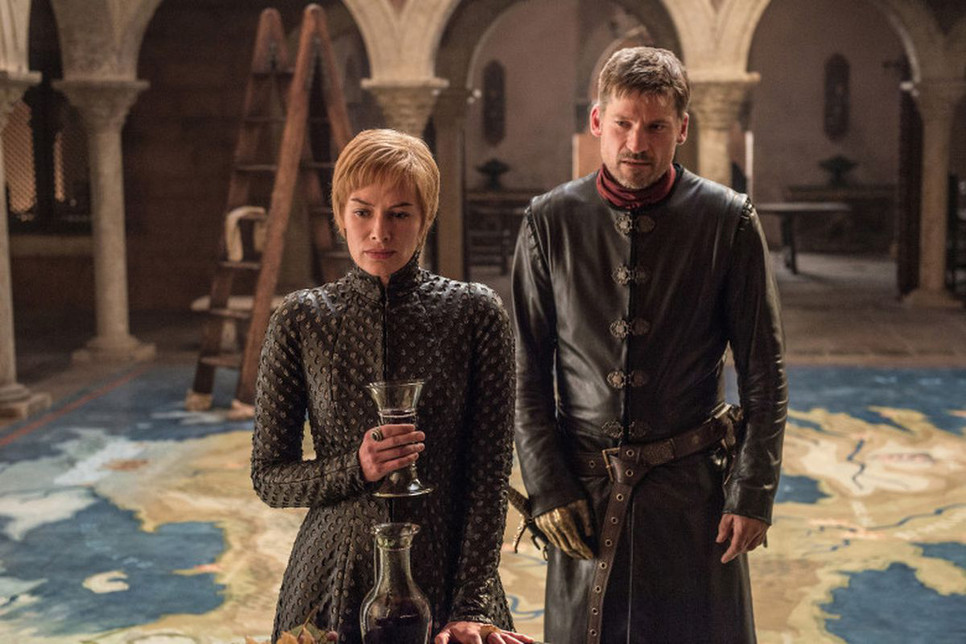 I Made A Promise

Jaime encounters Brienne again at Riverrun, where she reminds him of the man he could be. “You’re a knight, Ser Jaime,” she tells him. “I know there is honor in you. I’ve seen it.” But Jaime isn’t ready to turn his back on Cersei quite yet. He continues to lead the Lannister army, taking Highgarden and carrying the Tyrell gold back to King’s Landing, when suddenly Daenerys Targaryen, her dragon and a horde of Dothraki warriors ambush the party. Jaime manages to escape, and returns to Cersei with bad news: She’s got dragons. We’re gonna lose.

Tyrion convinces Jaime to organize a meeting between Cersei and Daenerys to discuss a truce. At the meeting, Jon Snow warns them about the Night King and the Army of the Dead, revealing a captive wight as proof. Cersei reluctantly agrees to cease hostilities and join forces to fight the dead, but when Jaime begins preparing for the expedition north, he realizes that Cersei has no intention of keeping her word. As Brienne said during bathtime: “You need trust to have a truce.” And Cersei struggles with trusting. Finally, Jaime walks away from Cersei and towards the North, intent on keeping his word to fight for the living. 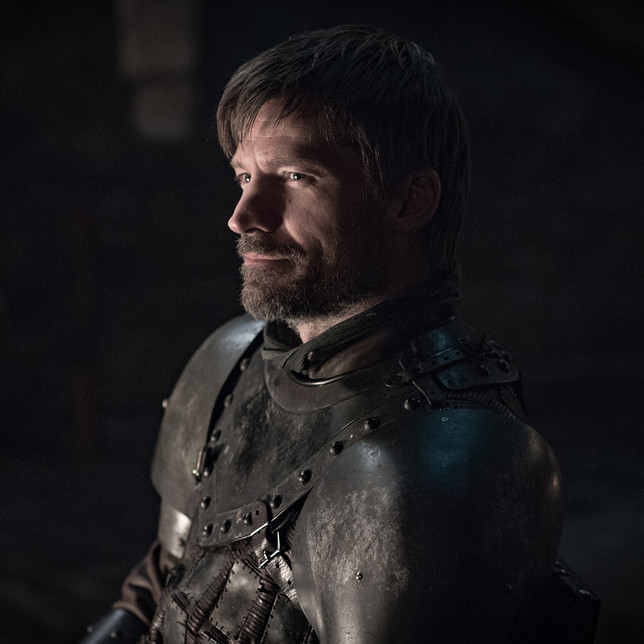 Jaime Lannister’s road to redemption leads ultimately to war. With Brienne’s help, the man who always displayed all the trappings of a true knight has finally become one in word and deed. And after seven long seasons blindly devoted to his sister, he’s finally able to see her as Cersei Freaking Lannister.

But with his departure, Cersei has absolutely nothing left to lose. Her children are dead, her father’s dead, and now, her brother-lover’s left her pregnant and alone. She’s blown up septs for less; how much more vindictive might she become? Meanwhile, Jaime and Brienne are due for a reunion, and we can't wait to see them back-to-back atop the ramparts of Winterfell, each wielding Valyrian steel like a couple of true knights. Will they survive to see a happy ending? Or will the Kingslayer meet his match in the Night King?

Find out Jaime’s fate in the wars to come on the final season of HBO’s Game of Thrones, airing Sunday nights on DIRECTV.