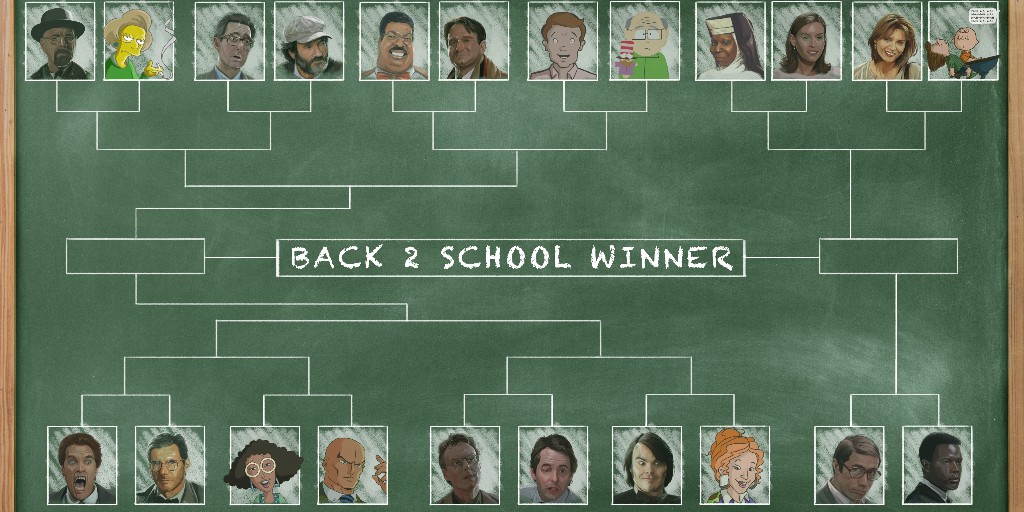 The Ultimate Back-to-School Teacher Showdown: Round 3

We are officially a couple of months into the 2020–2021 school year now. As teachers are doubling down in a time when the format of teaching has potentially been forever altered in the face of COVID-19, we've expanded our celebration and support to their fictional counterparts.

What started as 22 competitors in Round 1 of our Back-to-School Showdown has been whittled down to six cutthroat challenges, all vying for the title of the most iconic pop-culture prof.

Will Mr. Keating seize the day, or will Dewey Finn stick it to the Man? Or maybe Deloris Van Cartier will come out on a high note. Vote below to pick the three greats who will move onto the finals in Round 4 — and may the best pedagogue win.

It was always going to come down to this: 1997 Robin Williams versus 1989 Robin Williams, in the gentlest of battles to determine who’s the most supportive classroom dad of all. Fans of tough love will likely opt for Dr. Sean Maguire, the psychology professor/therapist extraordinaire who mentors Matt Damon’s titular troubled genius in “Good Will Hunting.”

Will’s been through the ringer and has learned to hide his emotional scars all too well and it takes a guy like Sean, who won’t look down on Will but also won’t take his crap, to coax him out of his shell and help him start to heal. Sean is unafraid to cut to the heart of the matter and get personal when he needs to, and that makes him a great teacher...and it doesn’t hurt that he also knows how to rock the hell out of an argyle cardigan.

But then again, it’s hard to argue with a classic. And no one says “inspirational teacher” in the American cinematic canon quite like John Keating of “Dead Poets Society.” In his English literature class, the beloved prof uses poetry as a means to encourage the repressed students at the all-male Welton Academy to live their lives to the fullest, question authority, and look at the world from a new angle.

This being a Vermont boarding school in the 1950s, his methods don’t sit too well with the powers that be. It isn’t every teacher who inspires their own “I am Spartacus” moment, as Mr. Keating’s pupils stand on their desks in his honor, quoting Walt Whitman to the heavens.

Sometimes, it’s about what happens in the classroom, and sometimes it’s about extracurricular activities. For Indiana Jones, it’s punching bad guys; for Dewey Finn, it’s rock-and-roll.

Sure, we know that Dr. Henry Jones teaches archaeology at Marshall College. But let’s be real — that’s not really the main draw of the “Indiana Jones” films. Harrison Ford’s iconic hero is a rock-’em-sock-’em adventurer ripped from the pages of 1930s pulp fiction, equally likely to woo a lounge singer, escape a cave-in, or battle the Third Reich. But true to his chosen field, Indy is still a professor at heart. And when it comes down to it, he’s here for lost artifacts and the historical and cultural value they can bring to the larger world. It takes a particularly nerdy action hero to sell a catchphrase like, “That belongs in a museum!”

What Dewey Finn (Jack Black) lacks in teaching credentials he more than makes up for in charisma. The down-on-his-luck guitarist at the center of “School of Rock” impersonates the mild-mannered Ned Schneebly in order to make a quick buck as a substitute teacher. But a con quickly turns into a genuine pedagogical experience as Dewey musters his young charges into a rock group to compete in the Battle of the Bands. Along the way, he brings out his students’ creative sides and latent talents, encouraging them in no uncertain terms to “stick it to the Man.” We stan a hungover slacker who becomes a great mentor despite his own worst intentions.

Connecting with kids on their level can often be the best way to engage with them, and these next two teachers are great at doing just that.

Based on a true story, Ramón Menéndez and Tom Musca’s 1988 classic “Stand and Deliver” follows Jaime Escalante (Edward James Olmos), who teaches calculus at Garfield High School in East Los Angeles. His class, which is primarily composed of Latinx students from working-class backgrounds, have been neglected by the establishment at large — but Mr. Escalante aims to change that. Starting from the idea that “math is the great equalizer,” he sets out to inspire ganas in his charges, which he describes as “desire.” Mr. Escalante’s class goes on to pass the AP Calculus exam, all thanks to a teacher who refuses to lower his expectations.

Deloris Van Cartier (Whoopi Goldberg) is another teacher who pushes her students to achieve even though the world at large expects them to underperform. In “Sister Act 2: Back in the Habit,” the Vegas lounge singer once again goes incognito as nun Sister Mary Clarence — this time to teach music class at San Francisco’s St. Francis Academy. Though administrator Mr. Crisp (James Coburn) is bent on closing the school down, Deloris is determined to turn things around by bringing out her students’ musical sides. (It helps that her class happens to include Rita, played by a young Lauryn Hill.) Deloris turns her once-listless charges into a high-grade gospel choir by encouraging them to use their voices and follow their passions, turning around not only their prospects but those of the school at large.

Submit your votes and don't forget to check back to find out which educator will reign supreme.

One of the most beloved rivalries in history is reignited ...

From James Bond to Marvel: Can Hollywood Survive a Year Without Blockbusters?

Looney Tunes: The Race for a Cartoon President

It's election season, the stakes are high, and ruthless competition ...

The Scariest Movie Villains of All Time: Revealed

We started with ten terrifying antagonists that have been spooking audiences ...

Understanding America: 10 Documentaries to Stream on HBO Max Before the Election

Songbird: The Only Way Out Is Together

Four years into quarantine the virus has changed and so ...

10 Movies Guaranteed to Creep You Out This Halloween

In the mood for nightmares this Halloween, or at least ...

If Our Favorite DC Heroines Were Running for President

Desperate times call for desperate measures. In a strange (but ...