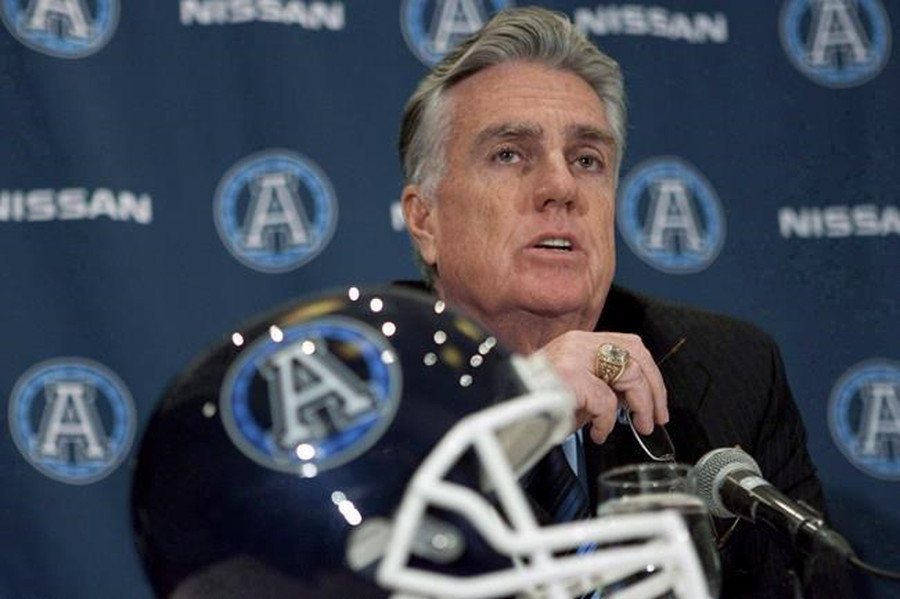 In 2001, Barker was the offensive co-ordinator with the Los Angeles Xtreme team that captured the first — and only —  XFL title. Shortly afterwards, the spring league founded by wrestling guru Vince McMahon folded.

McMahon relaunched the XFL this year with eight franchises and reportedly committed US$500 million over the next three seasons to get the venture on solid ground. But McMahon's reincarnation didn't finish the season, ceasing operation just five games into its 10-game schedule due to the COVID-19 pandemic before ultimately filing for bankruptcy.

Barker, currently an offensive/special-teams assistant coach and personnel consultant with the Hamilton Tiger-Cats, said the novel coronavirus outbreak robbed the XFL of its most important element — time.

"You need to establish followings and the problem is it takes three, four, five years to do that," Barker said. "But with this virus, now (McMahon) loses the revenue for this year, he pays for next year and who knows what's going to happen when they're supposed to go to camp in January.

"Will there be a vaccine by then? If not, now you're talking about another year. I think he just cut his losses. I'd be shocked if he didn't lose $150 million (this year). I do believe it's because of the virus. It's a costly venture and he had the money to do it but the only chance they had was survive this year, come back and play next year."

And it's that establishment of a following, Barker said, that allows NCAA programs to flourish despite the constant influx of new faces.

"College football in the U.S. is different," said the 62-year-old California native. "It doesn't matter who's playing because if people are from LSU, they're going for the experience of going to their school, their alma mater.

"The NFL now has created that following, and I think so has the CFL to an extent."

"I think (Ambrosie) can actually make headway getting people in Europe to play three-down football," Barker said. "I think it's much more conducive to what they understand as football.

"It's much closer to rugby and soccer than anything else. People in those countries, they don't really identify with the U.S. They love the money those guys make and that kind of thing but I think Ambrosie trying to sell three-down football in those countries is brilliant. It's a huge opportunity for the CFL."

Barker felt the lack of big-name quarterbacks hurt the XFL, which averaged just under 18,500 fans per game.

"Who wants to go watch some of the hamburgers they had playing quarterback?" Barker said. "P.J. Walker was fun to watch, he was an interesting guy . . . but I don't know if you'll ever see him in the NFL.

"The only XFL quarterback I can think of who made any kind of impact was Tommy Maddox, who played for us. When you don't have identifiable players that people say, 'You know what? I want to go see that,' it's tough. It's like minor-league baseball, they move their franchises around because people lose interest because it's not stars."

Walker led the XFL in passing yards (1,338) and TDs (15) for the Houston Roughnecks (5-0). Last month he signed a two-year deal with the NFL's Carolina Panthers before the club added veteran Teddy Bridgewater (three years, $63 million) in free agency.

"I wasn't surprised he (McMahon) tried it," Barker said. "He believed he could do something that hadn't been done before and there's a lot of excitement to that.

"Here's the key thing, he had the money and with $500 million you can go through three, four years. If you can hang through that, then you have a chance to make it happen but if you can't, no way. Who knows if the virus doesn't happen?"

Barker remains skeptical regarding whether someone else will attempt to crack the spring football market.

"If someone comes along and says, 'I have $500 billion and I want to spend $500 million to see if I can make a pro football league go and we're going to give it at least three full years, then there's a possibility it could work," he said. "But I don't see that person walking around."

Barker has won four Grey Cups as a CFL coach or executive, but he feels his XFL experience will forever stand out.

"It was truly exciting to be part of something brand new and brought from nothing," Barker said. "There's only like 50 XFL championship rings out there.

"Every day was something new, there was going to be a new rule passed. And even at the end, it (championship game) was a $1 million winner take all. How exciting is that? No, I wouldn't trade it for anything, it was that great."

This report by The Canadian Press was first published April 15, 2020.