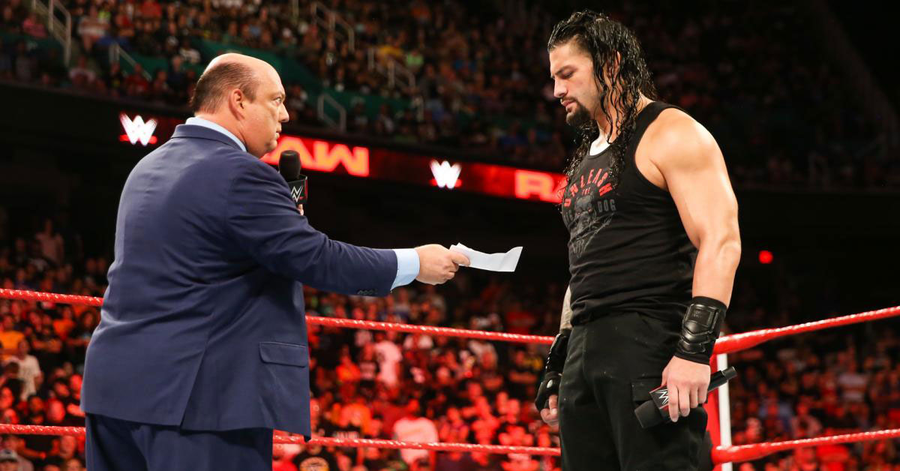 Bats, Pepper Spray, and SummerSlam – WWE THIS WEEK: 5 Things We Loved and 3 We Did Not

SummerSlam Weekend is upon us so lets get right to it! Find out how the WWE Superstars are faring this week on their road to the Barclays Center in Brooklyn this Sunday, August 19th with five things we loved (and three we certainly did not) below!

Roman Reigns has never strictly been a good guy. He’s never strictly been a bad guy. He’s just been a guy that WWE has tried extremely hard to turn into the next Stone Cold or The Rock. The results have thusly been fair to middling at best. Children tend to love him, but ask the average adult WWE fan and they either boo him wholeheartedly or cheer him in the manner which is customary in the Bronx. Six one way, etc.

However, these same armchair bookers tend to agree that turning Reigns into a full-fledged, piece-of-garbage bad guy would potentially  turn him into the star that WWE believes him to be. One look at his brief stint as a cocky, suit-wearing A-hole in NXT and you might agree that this version of Reigns is what the WWE needs.

Enter Paul Heyman, currently the much put upon advocate of Brock Lesnar (and best actor in the company) who has had some ups and downs with the Beast over the past few weeks creating an air of tenuousness around their alliance as they head to Brooklyn to face Reigns (again) this Sunday.

And this past Monday on RAW, yet another wrinkle was added to the story as Heyman came to the ring to ostensibly berate Reigns once again. BUT! Instead, Heyman handed Reigns a letter and spoke to him…in Samoan.  What did the letter say? No one knows. What did Heyman say in Samoan? I’m sure someone Samoan actually knows for sure, but the best we could find on the internet was something to the effect of “victory Can be yours”.

Then Heyman pepper sprayed Reigns right before Lesnar came down to wreck him as he’s done so many times before.

Was Heyman sending a secret message to Reigns? Was he simply playing mind games with one or both men? We have no idea whats happening here but this is the most interesting these two have been in YEARS so we’re looking forward to Sunday.

We spoke about this last week, but we felt the need to do a brief post-mortem on Renee Young’s first time on RAW commentary. In short, in filling in for Jonathan Coachman, she knocked it out of the park. Quick-witted and insightful, Renee was nothing short of a breath of fresh air for both the audience and the current announce team of Michael Cole and Corey Graves who usually spend most of their time trying to understand what exactly Coachman is talking about.

While we doubt it will happen again in the near future, we definitely look forward to seeing more of Nene behind the desk down the road.

LOVED: Ronda and the Bat

North Carolina is lousy with bats. Ronda Rousey found this out on Monday.

LOVED: Will the Revival Finally Get Gold?

The Revival are currently experiencing their namesake as they head to Brooklyn to FINALLY battle for the RAW tag team titles. While their “no flips, just fists” motto hearkens back to a kinder, gentler time when wrestlers merely punched each other in the mush until the bell rung, we suspect they’ll need more to take out the current champs, the B-Team, who have displayed more cunning than their name would suggest in recent weeks.

Either way, we’re happy to see the Top Guys gain some traction and land a PPV match.

Elias die hard, Ricky Roberts, made himself known to battling balladeer on RAW this week by SNEAKING INTO THE ARENA DRESSED AS A COWBOY WITH A GUITAR AND SLIDING INTO THE MIDDLE OF THE RING TO PROCLAIM HIS LOVE FOR ELIAS, as one does.

Flattered, Elias asked Ricky to prove his adoration by taking out the walking muscle mass known as Bobby Lashley. Unfortunately for Ricky, that’s not what happened.

While Elias and Lashley don’t have a match set for SummerSlam per se, Elias will be performing “the greatest song ever written” at the event on Sunday. If we were betting men (which, I’m not sure who you’ve talked to, but we definitely are not), we would guess that the two men will somehow find a way to clash, ideally with Ricky Roberts in attendance.

NOT SO MUCH: Jim “The Anvil” Neidhart Passes Away

Another WWE legend has sadly passed away this week as Jim “the Anvil” Neidhart fell victim to a head injury he sustained after a fall in his home. He was 63.

A gifted athlete in school, Neidhart found his way to the NFL during the 70s playing for the Oakland Raiders and Dallas Cowboys in practices and pre-season games. After getting cut from the Cowboys, Neidhart moved to Canada to train at Stu Hart’s legendary Dungeon in Calgary eventually making his wrestling debut in 1978 and earning the nickname “Anvil” after winning an anvil throwing contest.

Neidhart debuted in WWF in 1985, the same year he married Hart’s daughter, Ellie, and soon formed the legendary tag team known as the Hart Foundation with Bret Hart, Ellie’s brother and Stu’s son. The Hart Foundation quickly became a top heel team, winning their first tag team gold in 1987 and becoming embroiled in classic feuds with the likes of the British Bulldogs, The Fabulous Rougeau Brothers, and the Nasty Boys.

Neidhart had three children with Ellie, including daughter and current WWE Superstar, Natalya.

NOT SO MUCH: UGH. AMBROSE.

As we’ve mentioned before, Dean Ambrose may or may not have stolen this writer’s entire schtick from college: scraggly hair, ill-fitting leather jackets, black t-shirts, and blue jeans that were maybe too big. I INVENTED THAT LOOK.

But things have changed for the better since then! My style has improved, as has my posture, and overall physical well-being. And Dean Ambrose has not been on TV in a long time. Things were going so well.

So imagine my dismay to see Ambrose not only reappear this past Monday on RAW, but also stealing MY CURRENT look of pumped up guns with a cut off tee shirt.

AND HE HAS THE AUDACITY TO STILL BE MARRIED TO RENEE YOUNG.

Here’s hoping Ambrose gets what’s coming to him at SummerSlam.

Samoa Joe went to the well one too many times this week on SmackDown Live! As he once again brought up the fact that AJ is a terrible father and husband. This time he read a letter listing all the reasons AJ should never have procreated with one shocking twist – AJ’S WIFE WROTE THE LETTER.

This was stupid and kinda took the wind out of this feud for us.

But luckily for Joe, he is a REALLY good at wrestling and that regardless of his trying to squeeze blood from this particular stone, there is zero chance that he and AJ will have a bad match this Sunday.