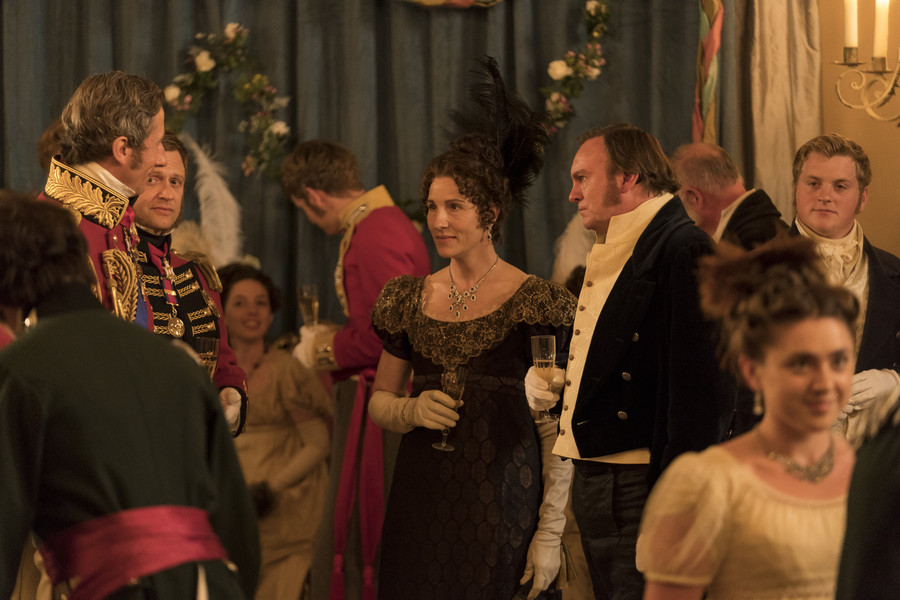 When "Downton Abbey" premiered on ITV and PBS in 2010/2011, creator Julian Fellowes kicked off the action with a tragedy known the world over — the sinking of the RMS Titanic, in which more than 1500 people lost their lives on April 15, 1912. For his new drama, "Belgravia," premiering in April on EPIX, Fellowes has again chosen a historical event to use as the jumping-off point for the show's story, though this one may not be quite as well known.

"Belgravia" begins on June 15, 1815, at a high society ball in Brussels, thrown by Charlotte, Duchess of Richmond. In the midst of the festivities, a commander tells all the men in uniform to leave immediately to fight a battle that would come to be known as the Battle of Quatre Bras.

Viewers may be wondering if a royal ball being so theatrically interrupted by war is the show taking a bit of dramatic license with history, but actually, this is a true story. Here's what you need to know about the infamous 1815 ball.

The Ball was Thrown to Honor the Duke of Wellington

Charlotte, the host of the affair, was married to Charles Lennox, the fourth Duke of Richmond. He was in command of the reserve forces in Brussels, which were in charge of protecting the city from a possible invasion by Napoleon Bonaparte and his army during the Napoleonic Wars. According to the Oxford Book of Military Anecdotes, the Richmonds threw the ball in honor of Arthur Wellesley, the first Duke of Wellington and the commander of the allied army during the Hundred Days War, which is the central conflict in the opening of "Belgravia." The allies were fighting alongside the Prussian Army in an attempt to defeat Napoleon's forces.

The Duke of Wellington had previously heard that Napoleon was advancing, but he wanted to go on with "pleasure as usual" and therefore told his wife to have her ball as planned. But just before dinner, which would have traditionally started around 1 a.m., a messenger arrives with a letter for Wellington that says that the Prussian army has been forced into retreat by the French at Fleurus, a small Belgium municipality.

This meant that the French army had crossed the Sambre river and were heading for Brussels. Officers for the allied forces began to leave to join their troops, although some stayed at the ball for so long that they ending up fighting the Battle of Quatre Bras in their dress uniforms.

One attendee, Katherine Arden, later recounted the moments in a letter to her aunt, which was printed in the Gordon Book, a history of the Duchess of Richmond's royal line:

"On Thursday the 15th of June, we went to the great ball that the Duchess of Richmond gave, and which we expected to see from Generals down to Ensigns, all the military men, who with their regiments had been for some time quartered from 18 to 30 miles from this town, and consequently so much nearer the frontiers; nor were we disappointed, with the exception of 3 generals, every officer high in the army was to be there seen.

Though for nearly ten weeks we had been daily expecting the arrival of the French troops on the Frontiers, and had rather been wondering at their delay, yet when on our arrival at the ball, we were told that the troops had ordered to march at 3 in the morning, and that every officer must join his regiment by that time, as the French were advancing, you cannot possibly picture to yourself the dismay and consternation that appeared in every face."

The Ball Became a Party of Legend

At the 2020 Television Critics Association winter press tour, "Belgravia" executive producer Gareth Neame said that they wanted to use an actual historic event as the show's setting to ground the narrative in reality.

"It’s one of those iconic events a little bit like we started 'Downton Abbey' with the sinking of the Titanic. And they’re both very romanticized, both incredibly tragic, romantic events in our imagination," Neame said. "So, we begin with a very recognizable moment in history. There are some real characters from history in the show, which is otherwise completely fictional, but that helps to place it in its place in time."

Show creator Fellowes was asked if the Duchess of Richmond's ball became one of those events that everyone says they were at, even if they were not there and he said that is absolutely what happened over time.

"It was a party that if everyone had been there who claimed it, the ballroom would’ve held about 5,000 people," said Fellowes. "But it became famous because many of the young men left it to go straight to the Battle of Quatre Bras, and two days later to fight [the Battle of] Waterloo. ... So it was a very kind of glamorous, tragic image, really."

Still, just like with "Downton Abbey," the historical event serves as merely a jumping-off point for a story about fictional characters. And in the case of "Belgravia," the story is not open-ended like it was with "Downton."

"['Belgravia'] has a tauter narrative. It’s a single narrative, a completed story. At the end of episode six, we’ve gotten to the end of the story. It isn’t open-ended in that way," said Fellowes, adding that "Belgravia" is "really about people achieving what they want despite the difficulties that society places in their path. And these take different forms in the different stories, but I hope it is essentially a kind of uplifting tale."