If you are reading this article, you are likely one of the 6.4 million people (and counting) who have watched the new Indiana Jones game trailer. This immensely hyped title is bought to you by Machine Games, the team that reimagined the classic Wolfenstein games, the newly revamped Lucasfilm games, and executive produced by none other than Todd Howard (of Skyrim fame). But it also has us hankering for the classic best Indiana Jones games.

After all, as with most cool trailers that only show concept art, however, we do not see any hint of a release date or time frame for development. All we really know is that it is coming, and by the looks of the hints the trailer dropped, it is going to have some interesting content.

So while you wait, check out the five best Indiana Jones games of all time. When we say "all time," we mean it — the oldest game on this list is from 1989!

5. Indiana Jones and The Emperor’s Tomb 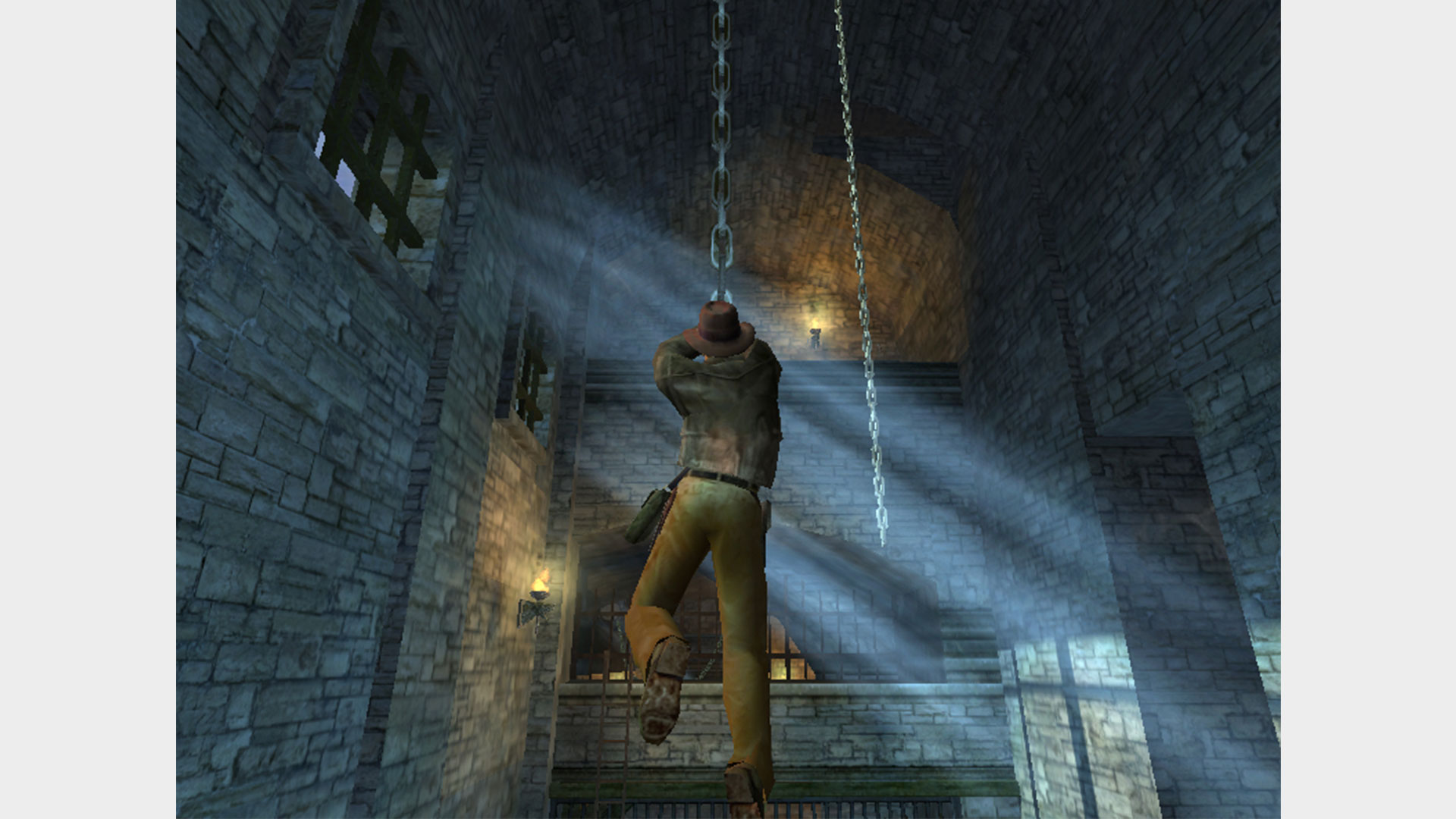 Released four years after the critically lauded Indiana Jones and the Infernal Machine, this title brought more modernized action-adventure mechanics, but lost a lot of the witty charm and engaging puzzles of its predecessor. While the game does effectively evoke the feeling of being the rough and tumble adventurer, some of the pure charisma that oozes off other Indiana Jones titles is missing here.

What will be occupying most of your time in this title, however, is the game’s fights. It uses a surprisingly articulate combat system, with a wide range of different possible maneuvers. You can enter choke holds, use improvised weapons (Indy bringing the steel chair is immensely satisfying), attempt shove attacks (bouncing opponents off scenery or other enemies) and disarm your opponents. The really exciting thing, though, is that opponents can do it right back to you.

It should be noted that this entry seems to still have a surprisingly thriving mod scene, so could potentially offer much more than The Emperor’s Tomb might on its own.

4. Indiana Jones and The Last Crusade: The Graphic Adventure 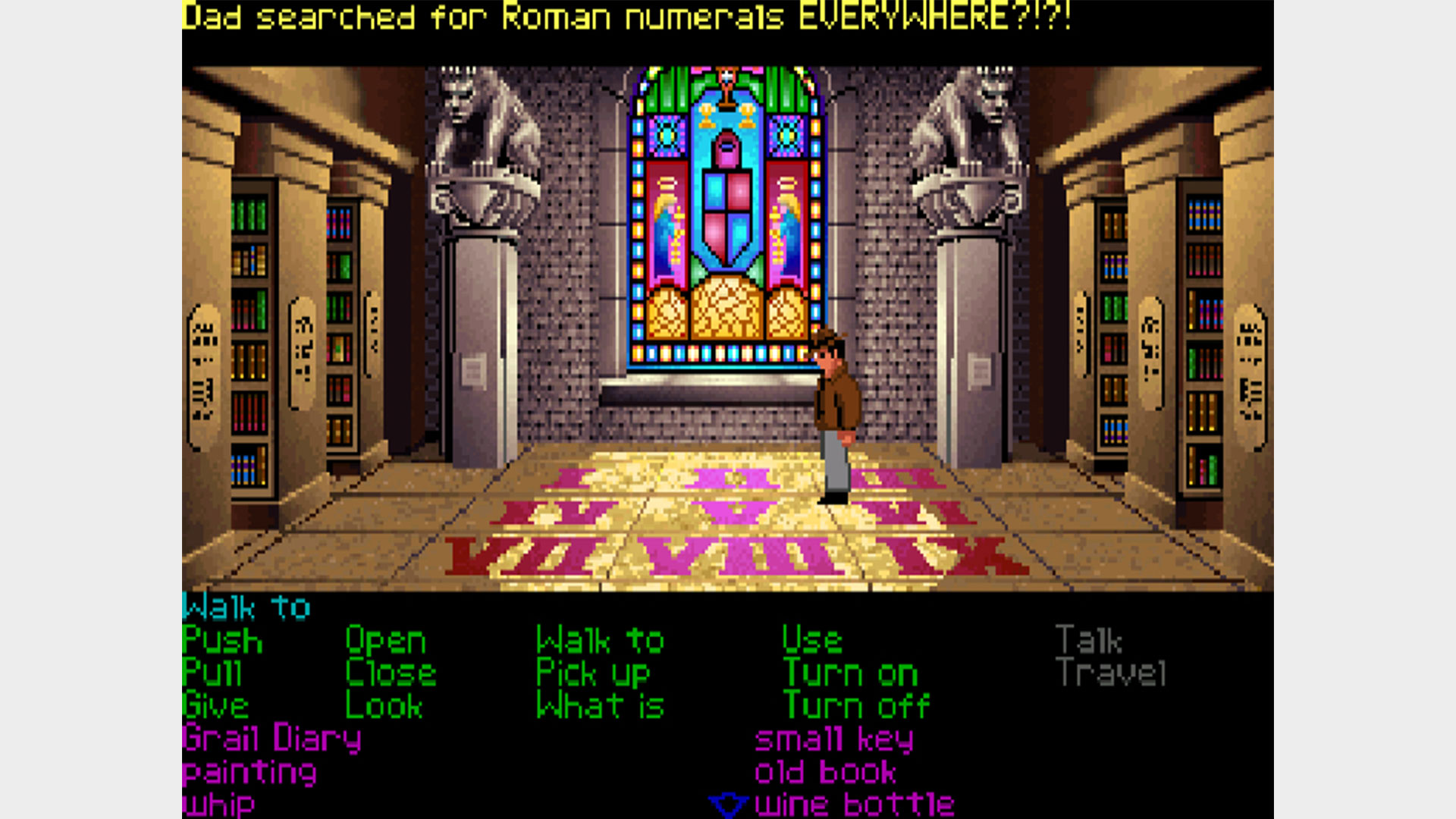 Two different games were released to coincide with the 1989 release of The Last Crusade. A much-anticipated film release needed two whole games, right? Well, history only remembers one of those titles — and it is the hit LucasArts point and click Indiana Jones and The Last Crusade: The Graphic Adventure.

While the Action Game may have been a commercial and critical failure, its innovative point-and-click companion piece was not. It laid the groundwork for the acclaimed Indiana Jones and the Fate of Atlantis title and stands on its own as one of the best uses of LucasArt’s SCUMM engine and a brilliant game in its own right.

While not quite as polished or as pretty as the later Fate of Atlantis, it still has some gorgeous little pixel-art set pieces. These aesthetics are coupled with some impressive gameplay mechanics at work in a deceptively simple-looking title, like a flight mini-game and a (mostly) functional combat system.

3. Indiana Jones and The Infernal Machine 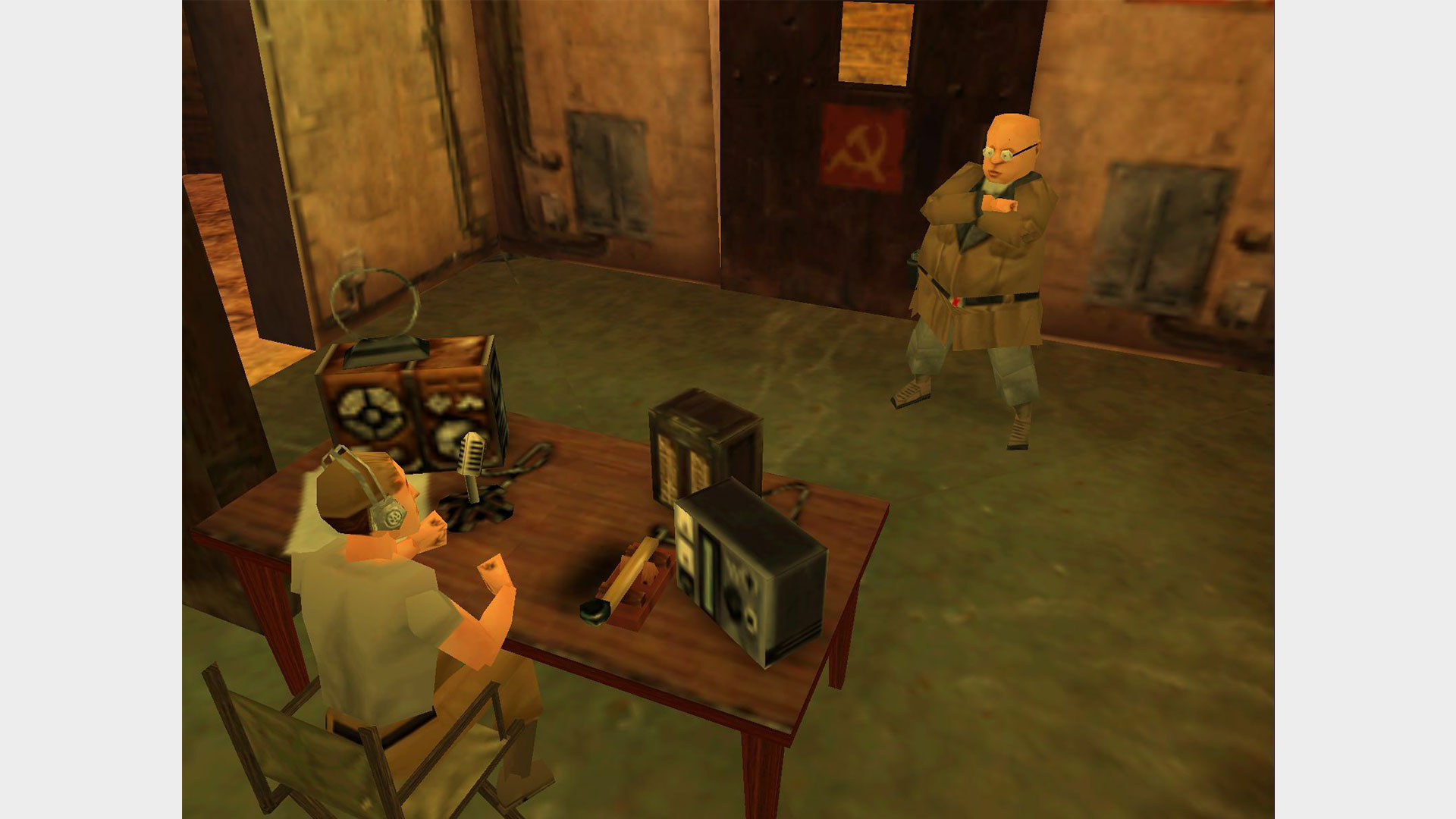 Although Indiana Jones and The Infernal Machine doesn't hold up to modern-day standards — thanks mostly to awkward controls — it doesn't mean the game wasn't a riot to play. The game drips with a tongue-in-cheek charm, spotlighting some delightfully silly non-player caricatures that cut the Soviet paranoia of '50s America with surprisingly incisive wit.

You are given a set of confusing controls and some puzzles to solve, just as Indiana Jones is presented with in the films that defined action cinema for generations. If you fancy giving it a go now, doing so will open a secret passageway to an absolute gem of a game, in spite of how rough-hewn it might be by modern standards.

2. Indiana Jones and The Fate of Atlantis 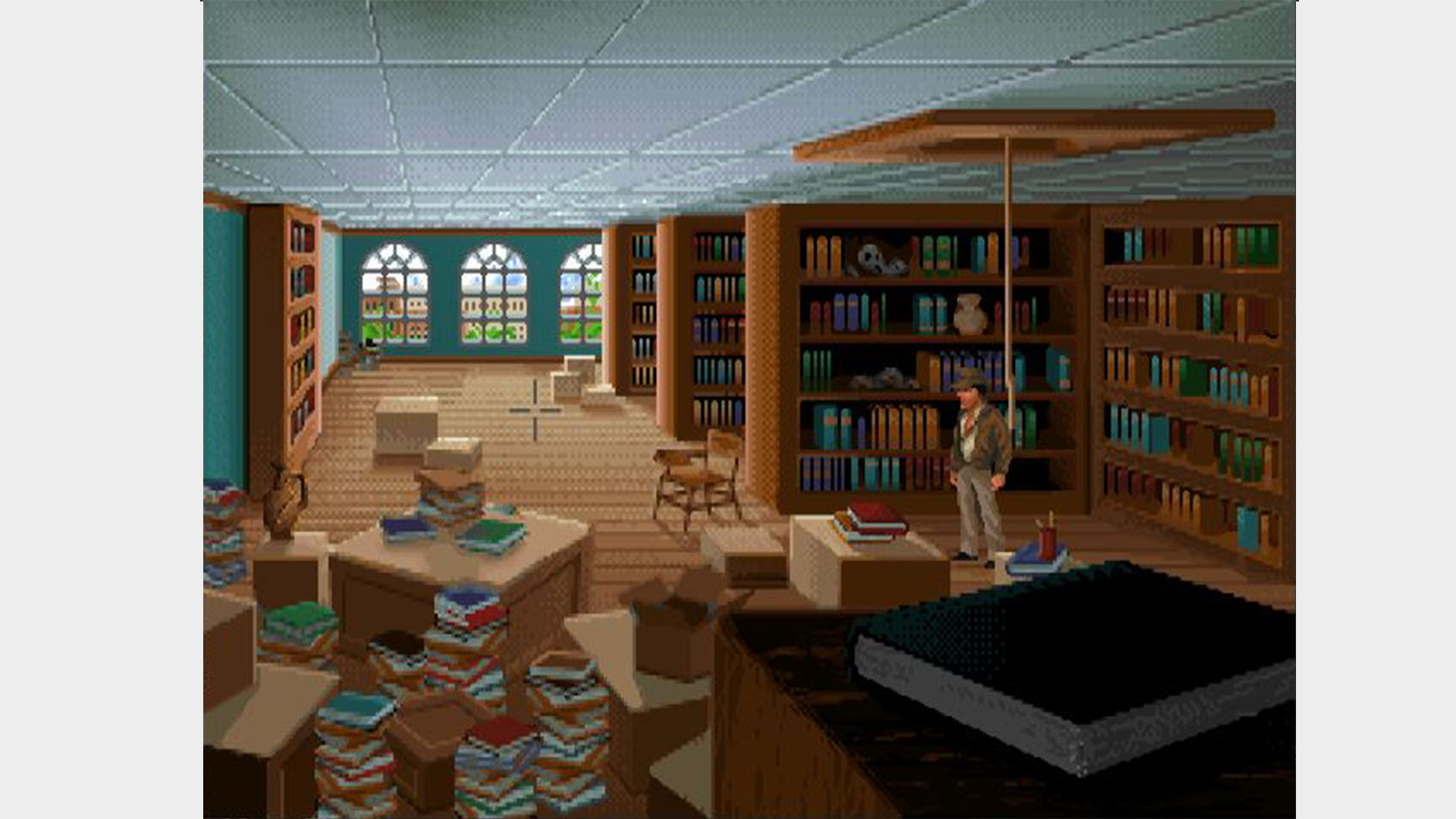 Developed on the LucasArts SCUMM engine in 1992, Indiana Jones and The Fate of Atlantis is a point-and-click adventure that set the standards for the upper echelon of this genre.

The game contains spiraling narrative paths that wildly diverge from each other and a custom set of gameplay verbs that helps clarify and streamline the logic of the point-and-click puzzles. Bizarrely, it also has a surprisingly satisfying combat system — tied into the Indy Quotidien points you accumulate throughout a playthrough.

In fact, it still stands as one of the superlative point-and-click titles of all time. The vibrant artistry of its scenes, the stellar voice acting, and spellbinding soundtrack never fails to enchant the player, even if the puzzles get occasionally tough. Interestingly, these were all additions in a 1993 “talkie” remaster of the game.

Not to mention, if you are interested in the upcoming Lucasfilms/Bethesda/Machine Games Indiana Jones title, it looks like he might be working with the CIA for an operation in Rome. The Fate of Atlantis is the first introduction to Sophia Hapgood, an archaeologist-turned-psychic, who in The Infernal Machine becomes Indy’s CIA liaison.

So, for a taste of some fantastic characters that you may see returning in future games, The Fate of Atlantis is a brilliant starting point. 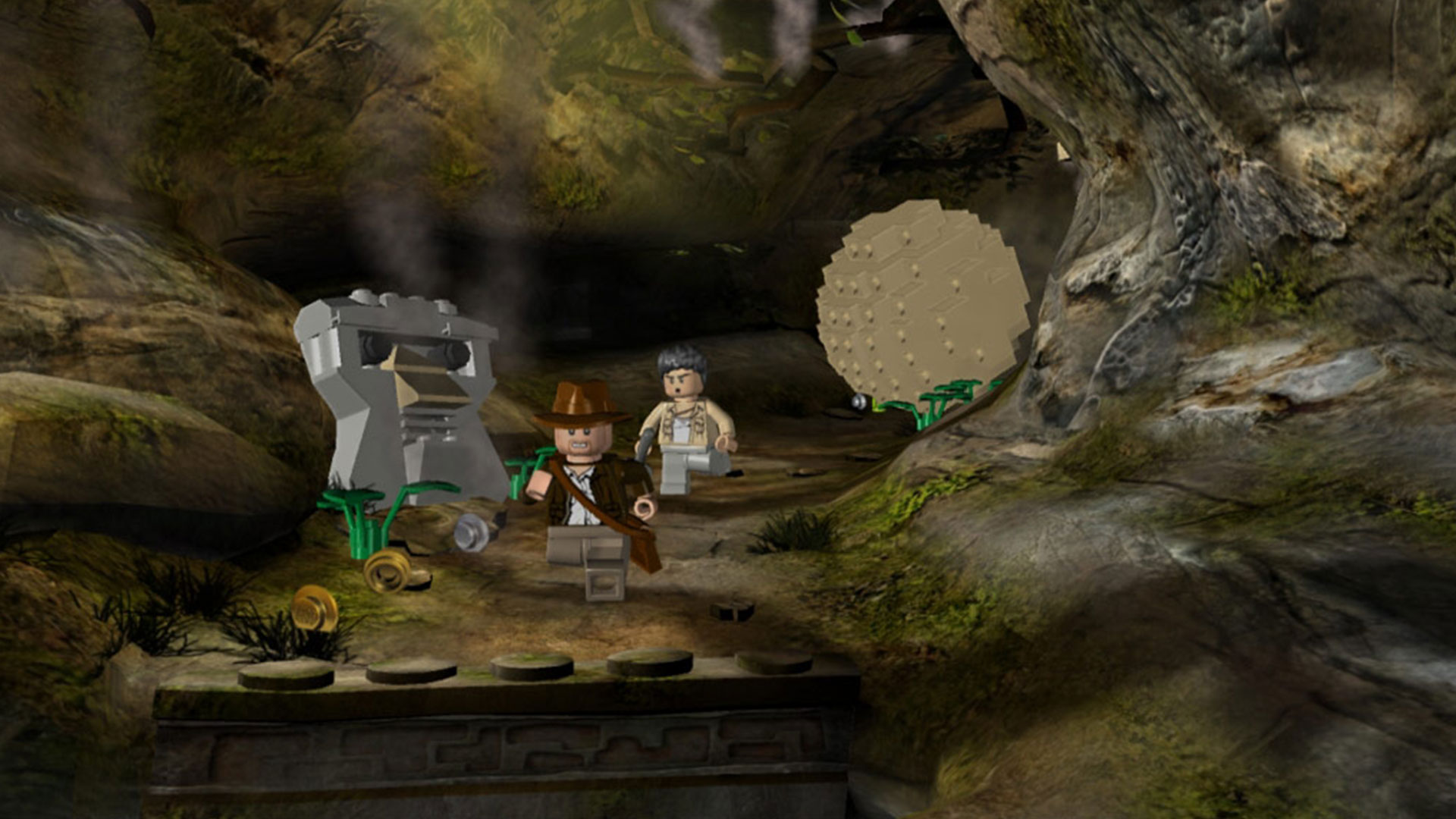 Many of the games on this list attempt to emulate the frenetic pace of the Indiana Jones movies, while also trying to capture the spirit of the franchise’s intricate traps and snappy humor. Most of them got there, but there's something special about the Lego game.

Lego Indiana Jones: The Original Adventures is furnished with a chaotic and fast set of action-adventure game mechanics, coupled with a characteristically bizarre aesthetic blend of pseudo-realistic backgrounds and Lego pieces.

No other title on this list quite captures the effortless fluidity of gameplay, the silly but respectful mockery directed at the films, and a deep homage to the source material. The drop-in, drop-out co-op mode is also a fantastic addition from the other Lego games, and emulates the constant juggling of evocative companions that Indy deals with daily.

This game does not do a huge amount of original storytelling or dangle any intertwining narrative paths like other games on this list — but it is undeniably the most fun. That is, ultimately what the Indiana Jones series strives towards (apart from maybe the fourth film), and that is what Lego Indiana Jones: The Original Adventures delivers.

This article was written by Martin Docherty from GamesRadar and was legally licensed through the Industry Dive publisher network. Please direct all licensing questions to legal@industrydive.com.