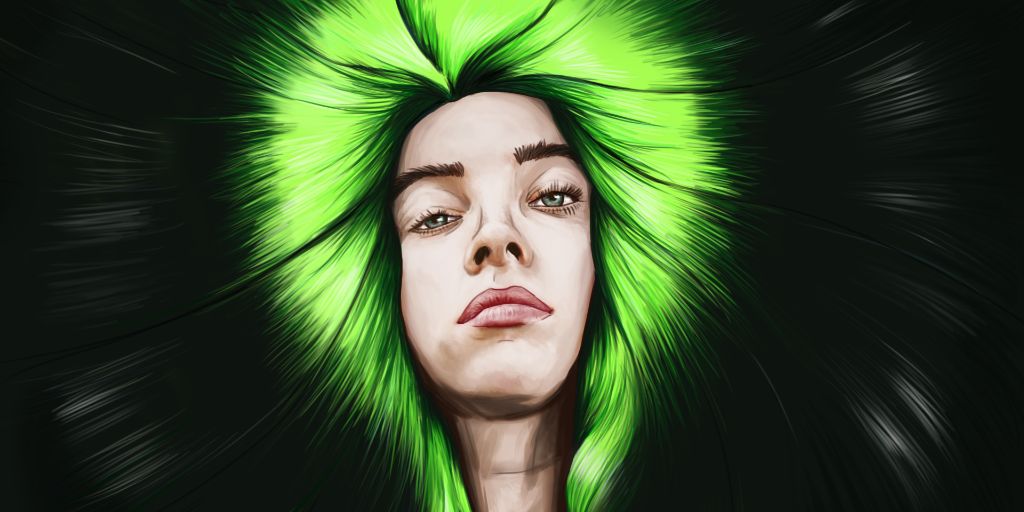 Billie Eilish is everything your average pop star isn't.

Routinely clad in oversize T-shirts, baggy sweats, and an attitude that won't quit, the 18-year-old superstar is a bundle of energy and brooding musicality who dances to the beat of her own drum. With her rainbow-hued locks, whispery vocals, and refusal to simply sit back and smile for the camera, she's fearlessly and unapologetically herself at all times.

In an age where pop music (and the singers themselves) is routinely decried for being over-processed, manufactured, and bereft of authenticity, Billie is making her own way, and she's reaping the rewards for doing so. She's about to embark on a massive world tour in support of her debut album When We All Fall Asleep, Where Do We Go?, and she's set to continue setting the music world ablaze from there.

But how did Billie Eilish become the queen of anti-pop? For Billie, it nearly felt as though it happened overnight. It all started with her 2016 single "Ocean Eyes," which soon became the catalyst for her astronomical ascent to stardom. After recording a song written by her brother Finneas O'Connell, Billie, born Billie Eilish Pirate Baird O'Connell, uploaded the song to the music streaming platform SoundCloud.

Originally meaning for her dance teacher to listen to the song as part of a project she had been working on, she went to sleep. After waking the next day, a veritable viral song was staring her down. "Ocean Eyes," her first track she created with her brother from the comfort and safety of her bedroom, suddenly had thrust her onto the radar of industry executives. Eventually, she found herself signed with Darkroom and Interscope Records, a fledgling pop star in the making.

From there, Billie's star only began to grow even larger as she began dabbling in the music industry. Not bad for a song that was only ever really meant for her teacher to hear. She then doubled down and started working on additional music with her brother Finneas. One track, "Bored," made an appearance in Netflix's series 13 Reasons Why, while her duet with R&B star Khalid, "Lovely," kept her in the collective pop conscious for some time.

But it wasn't until 2019 that her popularity truly began to explode after she dropped single after single that captivated audiences young and old. After releasing her first album, 12 of the 13 tracks included began charting on the Billboard Hot 100, the most ever for a female musician, even beyond the likes of Beyoncé and Ariana Grande. And it makes total sense why: she's arresting, without being recycled. She's doing things her own way, and it reflects in her sound.

Her unique voice is that of a murmuring angel as it effortlessly radiates out across a melding of different genres: pop, trap, hip hop, and even industrial. She's capable of taking any song and making it her own, from the cocky "You Should See Me In A Crown" to the analytical "xanny," her attempt at letting the world know she doesn't need to rely on drugs (like so many of her contemporaries end up doing) to "feel better" or more like herself. And when it comes to falling in love? She's got a few "strange addictions," that she lines out for someone on a track of the same title, riddled with fun references and sound bites from her favorite TV show, The Office.

While she sings about feeling empowered, being the "bad guy," or not wasting time on drugs, she still insists she isn't a role model. She swears like a sailor, her material can border on adult (there's a line in "Bad Guy" about seducing someone's dad), and she's known for some decidedly dark visuals. In the video for her song "xanny," she sits alone on a bench as unseen predators walk by and extinguish their lit cigarettes on a pained Billie's face. In another clip, she's seen smearing an oily black liquid all over her face as it streams down her face like tears. It's hardly family-friendly content, but her edgy, darker aesthetic is a hit with listeners of all ages. And she loves that she doesn't have to change a single thing about herself to attract new fans. She's giving us exactly who she is inside, and fans, from teenagers to adults, can appreciate that. Who isn't interested in seeking validation for their authentic selves throughout their lives?

Billie isn't interested in fitting in, conforming, or doing anything she doesn't feel is authentically her. Clad in streetwear that's far too big for what we assume is a petite frame that she deliberately obscures to avoid body shaming, she looks as though she was plucked straight from a skate park and directed to a Louis Vuitton runway before dip-dying her always-changing strands. Barely-there clothing and a sexy image isn't her aesthetic, and it never has been. She's not a "good girl," as she cheekily reminded us in her "all the good girls go to hell" video where she rocked terrifying, gooey wings, but she isn't saying she's "bad," either.

Billie lives for the freedom she's found in being herself as a massive pop star, though it's a life that's provided exactly the opposite for so many musicians over the years who have yearned for simply that: the freedom to look and behave the way they want to. Now, the anti-pop superstar wears her ability to remain outside of the box as a badge of honor as she continues to sell out shows, break records, and shake the pop world to its core.

"What the hell would the point be if I was just creating something that somebody else wanted me to create that I had no say in?"

At just 18, she's already got her priorities straight – it looks like there's nowhere but up for the darkly beautiful songstress – and we can't wait to see where she goes from here.