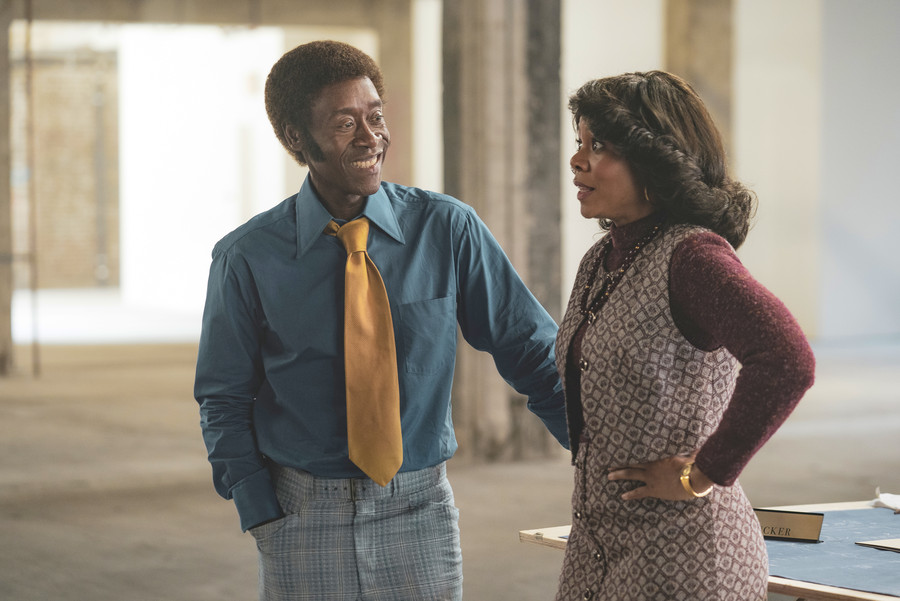 The first season of the SHOWTIME® comedy "Black Monday" built toward the infamous day from which the show derives its title: Oct. 19, 1987, the worst single-day stock market crash in history.

The first season finale saw reckless stockbroker Maurice "Mo" Monroe (Don Cheadle) staring down the barrel of a gun when Rod "The Jammer" Jaminsky (Bruce Dern), Mo's supposedly-dead father figure, showed up and pulled a gun on everyone just as Keith Shankar (Paul Scheer) was thinking about killing himself on the balcony. The ensuing struggle sent the Jammer falling to his death courtesy of Mo, who then finally kissed his love interest, Dawn Darcy (Regina Hall), before fleeing town.

Here are four things fans can look forward to if you're just catching up to season two of Black Monday.

There Will Be Fallout From Jammer's Death

"The show has stakes ... there is a body count now associated with these characters, and that comes into play, and it doesn’t just go away. And a lot of this season is kind of making amends, getting revenge, partnering up, so I think that the fallout of it — there’s always some real weight to the characters, no matter how big the cellphones are," Scheer told the 2020 Television Critics Association winter press tour.

Co-creator Jordan Cahan added that season two is about "who is going down for the crime?"

"We saw the how, and then I think the mystery really continues as far as, like, our show does have consequences and stakes, and it’s who’s going to pay for that?" said Cahan.

Mo Will Eventually Be Back on Top

Even though Mo ended season one on the run, he won't be gone for long. Season two is going to not only examine how he claws his way back to the top this time, but also how he did it in the first place.

"Mo enjoys the climb more than the view from the top anyway, so now we’ll get to see him climb his way back up," said co-creator David Caspe. "That’s the part of his backstory we never got to see: you saw who he was before he went to prison, and then what he became after his conversations in prison with Jammer turned him onto Wall Street. It’d be interesting to see how Mo climbs now, and that’ll give us a view into how he climbed initially."

Blair and Tiffany Are Getting Shakespearean

While Blair is starting to realize something might not be quite right with his marriage to Tiffany (Casey Wilson) since he's wrestling with the suspicion that he might be gay, the two are still a power couple with their eyes on the prize of being wealthy and successful — which means a dark turn for Blair in particular. Think Macbeth and Lady Macbeth, especially with Blair working in D.C. as a lobbyist this season.

"We sort of left Blair at the end of season one on the precipice of making a lot of personal decisions, and then this season we really got to launch into them, and he gets dark real fast," Rannells told the TCA winter press tour, adding, "We also get to explore sort of what their very special marriage is; that they’ve made this commitment to each other to be partners and to be successful and to really excel at this idea of their personal life, but also their professional life."

Wilson added that despite everything, Blair and Tiffany are "stronger than ever."

The Scope Is Widening

The first season was largely contained to Wall Street, but now that the characters have been blown apart by the season one finale, the scope of season two is widening.

"I feel like the first season, we were very much in a very small world, with it being in that trading office," said Scheer at the TCA winter press tour. "Then the first episode of the season, we’re starting in Miami, DC, and New York. And that kind of gives you the lay of the land. There’s so many more characters coming in."