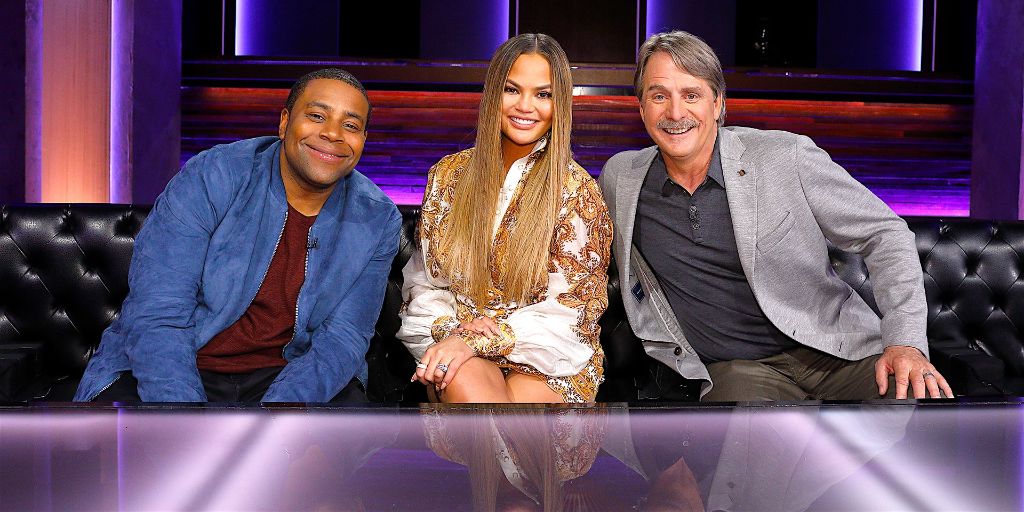 Bringing the Funny When We Need It

I don't know about you guys, but I could use a laugh right about now.

Enter Bring the Funny on NBC - a comedy competition show that is looking for the headliner with the right stuff to split our sides. While there have certainly been comedy competition shows before (Hi Last Comic Standing, thanks for giving us Iliza Shlesinger!), this one takes an agnostic view at the types of comedians it highlights. Broadly separated into Standup, Sketch, and Variety, acts competing for the $250,000 grand prize include a guitar playing British duo, a comedic magician billing herself as the funny Mary Poppins, and an Australian puppet named Randy Feltface. Though it gets tough to compare such wildly different acts to one another, judge (and Twitter Queen) Chrissy Teigan told us she followed one simple rule: "Does this make me laugh or does this not make me laugh?"

But there's much more to gain from appearing on the show than just the cash. As judge and SNL vet Kenan Thompson told us "I'm just excited that they get to be on a platform like NBC," noting that even those who don't win will have the opportunity to show themselves off and book future gigs from the opportunity.  Teigan echoed the sentiment, saying that "NBC and comedy have gone hand in hand for so long now" that it's time they were able to showcase up and comers like this.

She's definitely not wrong. Within the last few years, NBC has become the home of some of the funniest and most acclaimed comedies on TV. Being the only of the Big Four cable networks to snag an Emmy nomination in the Best Comedy Series category (for the amazing, hilarious, and forking INSANE The Good Place), the peacock can really strut their stuff when it comes to laughs.

And, frankly, can't we all use a few more laughs these days? With a new scandal popping up each day, an ever more polarized political situation pushing people apart, and some of the scariest storms and weather patterns seen in years, everyone could benefit from taking the time to share in some comedy together. As the final judge, Jeff Foxworthy, points out early on "laughter is contagious" and it's the kind of bug we could all afford to catch.

Host and stand-up comedienne Amanda Seales perhaps said it best: "We're all laughing to keep from crying, so we need to bring something that makes us laugh because it's funny."

Bring the Funny airs Tuesdays at 10/9c on NBC.