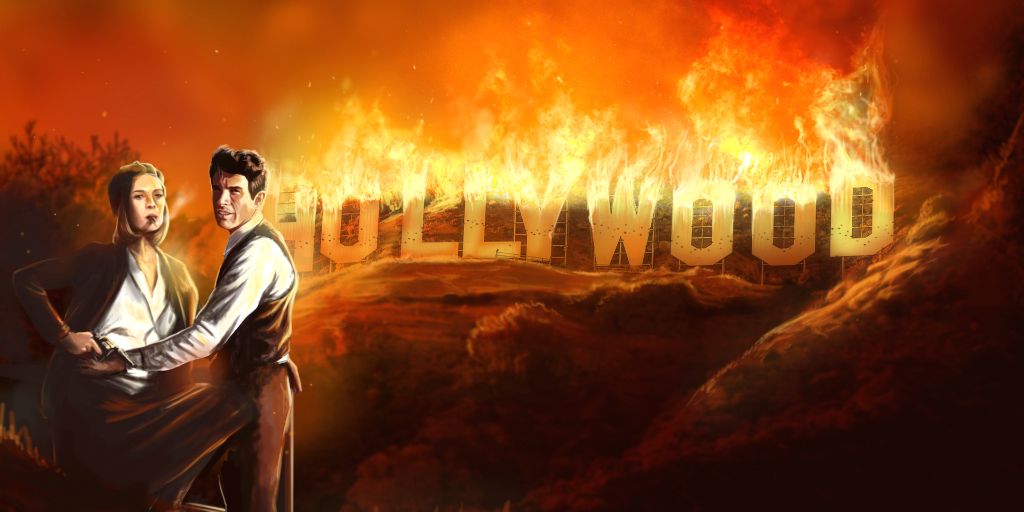 Bummer of ’69: The New Hollywood Context Behind Tarantino’s Latest

Fifty years ago this August, a band of drug-addled, unkempt cultists drove to a nice Southern California neighborhood and killed five Hollywood sophisticates, two grocery store owners, and the entire public perception of the 1960s.

The feel-bad story of the Manson murders provides the backdrop to Quentin Tarantino’s ninth film, Once Upon a Time...in Hollywood. Its protagonists are a washed-up TV actor and his stuntman, drawn near the killings by coincidence. But Rick Dalton (Leonardo DiCaprio) and Cliff Booth (Brad Pitt) aren’t even aware of the possible threat to their lives. Instead, they spend the film preoccupied with their livelihoods.

It’s no coincidence that a Hollywood movie featuring Hollywood crimes would also be about the challenges facing Hollywood actors in 1969. The explosive cultural changes of the late Sixties, and their aftermath, more or less blew up the entertainment business. That industry-wide tumult is a key component of Tarantino’s new film. While a sagging American film industry would enter an artistic and economic renaissance, that change didn’t come without casualties.

For those who don’t know as much about 1960s film as Q.T. (i.e. everyone), it might be helpful to brush up on Hollywood history before sitting down for his three-hour advanced course. Here’s how, and why, “Old Hollywood” gave way to “New Hollywood,” how Charles Manson (briefly) played a part, and why Tarantino’s main characters are so upset about it all.

Old Hollywood and the studio system

During the Golden Age of Hollywood, the studio system governed film production and distribution at every step. “Studio system” is what every other industry calls “vertical integration”: a handful of companies wrote, produced, and distributed most movies. Actors, writers, and directors were studio assets, as were producer-owned movie theaters.

In 1948, the courts crashed the party, ruling that film studios couldn’t sell their own product. Movie theaters became independent. But for decades, most American movies were still made by the same players: Warner Bros., MGM, Paramount, and a handful of others. Under this system, these studios exerted unlimited control over their output. Almost.

The Hays Code and studio censorship

Since the silent era, moral crusaders had protested the indecency of movies and movie stars. Censorship laws differed from state to state; scenes that played well in New York were cut in Missouri. Scissor-wielding watchdogs snipped through film reels with little regard for artistry or narrative. Didn’t like it? Too bad: in 1915, the Supreme Court ruled that free speech didn’t apply to motion pictures.

Faced with bad press, boycotts, and threats from lawmakers around the country, the studios decided that self-censorship was preferable to actual censorship. After several false starts, the Motion Picture Association of America agreed in 1934 to abide by the Motion Picture Production Code. Also known as the Hays Code (after Will Hays, its first enforcer), the MPPC is why on-screen couples slept in separate beds, respected police officers and the clergy, and kissed only in a three-second “seize-and-freeze” formation.

The Code meant that all movies were essentially rated G. It even mandated happy endings, with wrongdoing punished, goodness rewarded. “Adult” content came disguised: suggestive glances, double entendres, and bloodless violence allowed filmmakers to obey the letter of the law, if not the spirit, for decades.

Battle for the box office

The mostly intact, self-censoring Old Hollywood studio system persisted until the 1960s, when foreign films, independent distributors, and television chipped away at its market dominance. As the baby-boom generation matured into adolescence and adulthood, the youth market was enormous...but Hollywood was losing touch with it.

The all-powerful executives of the studio era, once rulers of petty kingdoms, faded into retirement and irrelevance. Their successors failed again and again to connect with new audiences. Profits dwindled. Mergers and acquisitions became the order of the day, creating a doubtful future for those still employed.

U.S. distributors’ hands were tied. And in 1952, the Supreme Court reversed course, ruling that motion pictures were, in fact, protected by the First Amendment—no censorship allowed.

So by the 1960s, the Hays Code was laughably out of step with the culture. In 1966, audiences could see Debbie Reynolds as The Singing Nun, or full-frontal nudity in Michael Antonioni’s Blow-Up. They chose the latter, to the tune of $20 million in box office receipts.

The success of Blow-Up was the final nail in the MPCC’s coffin. As even domestic filmmakers began to ignore the Hays Office, new MPAA president Jack Valenti tried a stopgap in 1966: Suggested for Mature Audiences, or SMA.

SMA (or "M" for short) preceded the permanent age-based ratings system, instituted in 1968: G, PG, R, and X (later NC-17, though more like a “hard R” at the time). The Hays Code was out, the studios free at last to produce movies for contemporary adults.

The graduates: an American New Wave

American movies released under an "M" warning tag included the innuendo-laden Who’s Afraid of Virginia Woolf?, the lurid and brutal noir Point Blank, and the all-of-the-above Reflections in a Golden Eye (tagline: “Leave the Children Home”).

There was much more to come. Between 1967 and 1968, the dam burst on challenging, adult-oriented American films. “Gritty” and “realistic” became sought-after ideals, deliberate contrasts to glossy, stylized Old Hollywood trends. Young audiences saw their lives reflected on screen in rebellious, stick-it-to-the-Man characters and morally ambiguous scenarios.

Bonnie and Clyde (1967) is commonly cited as the turning point between Old and New Hollywood. Its titular bank robbers shocked audiences with spattering blood squibs and slow-motion deaths. In the end, they’re portrayed as neither good nor bad, their crimes neither pardoned nor definitively condemned. Bonnie and Clyde was a monster hit, alongside a string of other soon-to-be classics like The Graduate, Cool Hand Luke, and The Dirty Dozen.

By 1969, the likes of Easy Rider and Midnight Cowboy would cement New Hollywood as just plain Hollywood. Midnight Cowboy was the first X-rated film to win the Academy Award for Best Picture. The stage was set for the 1970s, when slow-burn conspiracy movies, idiosyncratic character studies, and deep, dark violence would define American filmmaking.

The "M" label also appeared on 1967’s Valley of the Dolls, co-starring Sharon Tate. The pill-popping fable wasn’t a huge success (though it would become a cult hit), but its topical, risque content put her on the map as a New Hollywood star.

Tate was given tragically few chances to shine, but in all her films, she projects a gauzy, otherworldly loveliness that floats above sometimes dubious production quality and screenwriting. It's a trait she shares with the [similarly luminous Margot Robbie], perfectly cast as the promising young ingenue in Once Upon a Time...In Hollywood.

Tate met her husband, Roman Polanski, on the set of a different mixed-bag exploitation film from 1967, The Fearless Vampire Killers. The European New Wave director was notorious for psychosexual horror films like Repulsion. His sensibility won American critics and audiences with Rosemary’s Baby, and Tate and Polanski became an “it” couple of New Hollywood. Two years later, the 26-year-old expectant mother would be dead at the hands of the Manson family.

Back to Once Upon a Time...in Hollywood and the character of Rick Dalton.

New Hollywood was arguably the biggest shift in American entertainment since talkies. Now it was television’s turn to run scared from the competition. Newly unrestricted mainstream films made fuddy-duddy FCC rules look even more dated. In Tarantino’s film, Rick Dalton stars in Bounty Law, a fictional TV show dating to the 50s. Dalton’s character, like his real-life counterparts Clint Eastwood, Burt Reynolds, and Steve McQueen, wants to break into movies. Unlike those stars, he can’t make it work. Dalton’s “Am I still relevant?” anxiety stands in for a more widespread Hollywood fear: “Are we still relevant?”

Cowboy movies were one of the casualties of New Hollywood. “Spaghetti” Westerns like The Good, the Bad, and the Ugly redefined the genre as bleak and bloody. These Italian imports set the tone for a string of violent, nihilistic movies about the American West. Murderous cowboys and hardened criminals replaced friendly sheriffs in films like The Wild Bunch, Butch Cassidy and the Sundance Kid, and The Magnificent Seven. With the latter, a retelling of the 1954 Akira Kurosawa classic Seven Samurai, Hollywood had come full circle, acknowledging and capitulating to the trends that ushered in the studio system’s demise. If you can’t beat ‘em, remake ‘em.

In the heyday of Old Hollywood, studios churned out dozens, even hundreds of Westerns a year. Every backlot had a saloon, and large movie ranches dotted the San Fernando Valley. But by 1969, the demand for Old West sets had cratered, and these fake frontier towns represented little more than fire hazards.

One of the loneliest of these sets was Charles Manson’s home base at the time of the murders. Its proprietor, George Spahn, hadn’t rented to a film production in years. He agreed to let Manson and company squat amid the mocked-up storefronts and hitching posts in exchange for maintenance work (from Manson’s two male followers) and sex work (from the girls).

Brad Pitt's character, Cliff Booth, visits Spahn Ranch in the film. It’s in worse repair than the TV sets where Dalton still works, but Manson’s dilapidated relic isn’t too different from the creaky Bounty Law backdrops. It’d be enough to trigger an existential crisis in anyone.