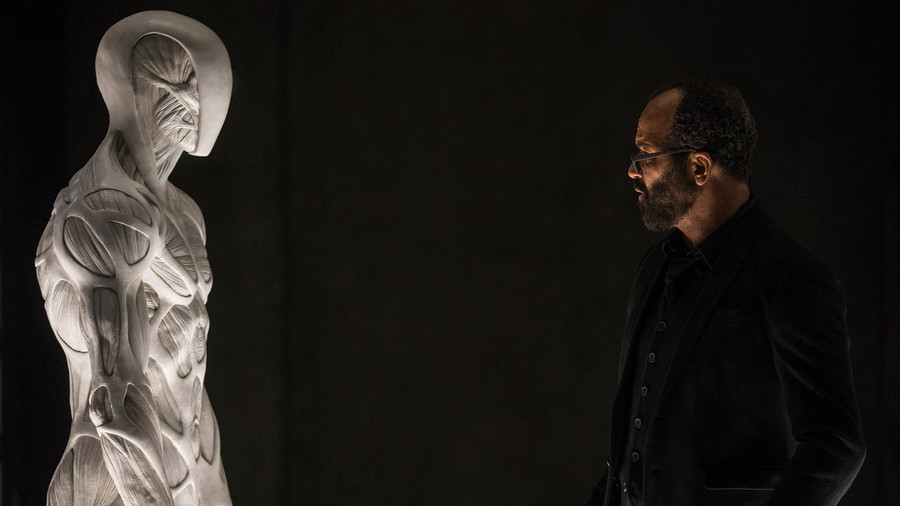 Catch Up on Westworld’s Season Two Marketing and Teasers

How do you get fans hyped for a show's return when it's been off the air since 2016? The Westworld team at HBO pulled out all the stops to engage the show's fandom (creators of memes, theories, and many, many comment threads). Following these viral reveals can give hints and clues about season two and beyond — as long as you take showrunner "spoilers" with a grain of salt.

For those of you who want some help keeping track of all the new Westworld content and teasers (or who just don't feel like translating binary codes), we're here to help you through the maze.

The first place to start looking for Westworld season two teasers are the three official websites designed by HBO:

The Discover Westworld site normally displays advertisements for potential park visitors, with the promise that guests can "exist free of rules, laws, or judgment." But in late March 2018, the website changed to look as though the hosts took it over. After the host takeover, the site's "Live Without Limits" slogan was replaced by "Life Without Loops" and the "Experience" section of the site is clearly the hosts speaking to the humans.

It teases things like power ("We're in control in ways you never can be") and thrills ("The action is real. The stakes are real. And now no one is safe") for the hosts, not the other way around. It also features a map under the "Explore" section which is updated with each new episode, tracking Dolores (Evan Rachel Wood) and Maeve's (Thandie Newton) movements throughout the park.

The Delos Destinations site is for the corporate side of the company, and there are several fun Easter eggs, including confirmation that Westworld is one of six parks included in the robot-occupied world. The actual themes of each park are not revealed, but we do get some insight into Shogun World (park two), which sounds rather terrifying, and The Raj (park six), which sounds more laidback than the other parks.

"For those for whom Westworld is not enough, the true connoisseur of gore can indulge their fantasies with the slash of a katana. Modeled after Japan's Edo period, Shogun World offers a chance for guests to embrace their inner warrior, in a landscape of highest beauty and darkest horror. Let your true self take shape in the land where self-discovery is an art form."

While The Raj description promises:

"Come and experience the grandeur and love of a place lost in time (translated from Hindi). If being pampered by our world-class spa isn’t your cup of Darjeeling Tea, the park's jungles and mountains are your only chance to glimpse magnificent beasts long vanished from your world."

Finally, hidden code in the Westworld Super Bowl ad led fans to the site for Delos Incorporated, the parent company for the whole operation. This site introduced a new character through a bio for founder James Delos (Peter Mullan). Delos is also seen briefly in a video clip that we'll get to in a second.

HBO used its official trailers for season two to hide binary code for eagle-eyed fans. The first set of code led users to the Delos Destinations site, and the second set led to a promotional video for Delos Incorporated that starts glitching about one-third of the way through and eventually shows footage of James Delos carving up his own face. We now know that that was actually a host meant to be an exact replica of the Delos founder, but not just any host — a host with an actual human consciousness in its head, not simply the regular hosts' computer code. The Delos-bot is no more, but the implications of having that kind of technology are legion.

The video also features short clips of faceless hosts that haven't been given skin suits yet, bodies lying underneath some railroad tracks, and a glimpse of new cast member Zahn McClarnon, who plays the mysterious Akecheta. It paints a chaotic picture of what is going on inside Westworld.

At the end of the video, there is a code that lets you log in to the Delos Incorporated website. When you do so, a blue door appears (the creators have revealed that season two is subtitled "The Door") that takes you to another hidden video. The video makes it seem as though Charlotte Hale (Tessa Thompson), the executive board member who was scheming against park creator Robert Ford (Anthony Hopkins) in season one, has logged into the site.

Buried among the code is an admin directive to "find Peter Abernathy" — Abernathy being the host Hale and Lee Sizemore uploaded all the park's intellectual property into before turning him loose in the real world. Abernathy had a mental awakening in season one and later whispered the sentience-triggering phrase "These violent delights have violent ends" to his daughter, Dolores.

At 2017 San Diego Comic-Con, guests could sign up for a 30-minute immersive Westworld experience. The participants were greeted by "hosts," shown weapons, and underwent a Q&A session to determine their mental fitness to enter the park. Then their personal host handed them either a white hat or a black hat and they were ushered into the Mariposa Saloon for drinks. The Verge called the experience "a highlight of the convention."

HBO also brought the Westworld experience to 2018 SXSW, creating a pop-up Sweetwater, the town where a lot of the season one action takes place. The pop-up version wasn't merely a couple storefronts; it was two acres of land populated by more than 60 actors playing hosts. Participants spent all day deciphering clues, interacting with hosts, and exploring the town. Esquire compared the experience to attending an immersive performance of Sleep No More.

How will the promotions and teasers continue as season two airs? Snapchat users should check out the Westworld filter that turns them into a host.