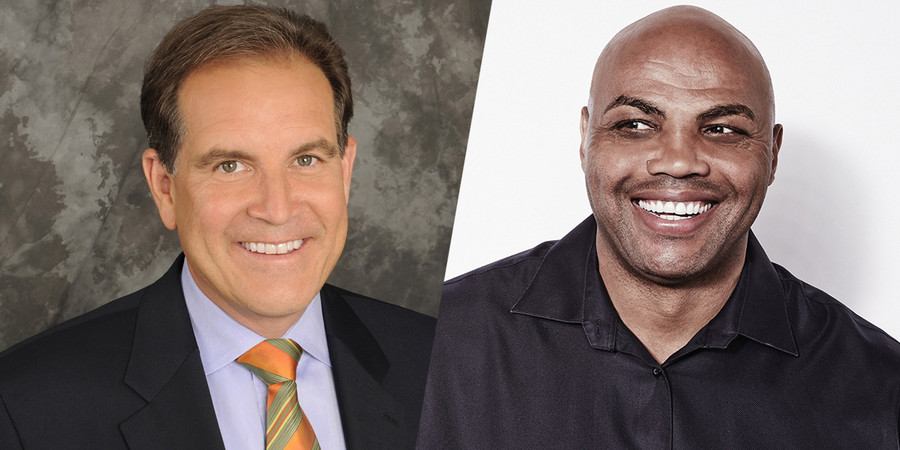 Charles Barkley and Jim Nance Weigh In On March Madness®

NBA legend Charles Barkley and the voice of CBS Sports, Jim Nance, talk March Madness® and the unpredictability of this year’s tournament.

Who do you guys think is the player of the year for you?

Charles: You know, that's a loaded question. Because the best player is the kid from Arizona (Deandre Ayton). He's the best player. You know, Trae Young's had a terrific year, and he didn't even win player of the year in his own conference. But I don’t have a vote. I'm glad I don't have to vote on that.

Jim: This is, unlike college football where there's the Heisman, college basketball has a unique situation. There's the Wooden Awards, there's the Naismith Award, there's the AP College Player of the Year award. I mean, there are like a hundred different players of the year, different awards out there. And this year, more than any others, is to Charles' point, there's not one guy that stands out. There's a lot of really good players, but there's not an obvious pick right now.

Most of these things are decided upon before you get the NCAA tournament games factored in, so it will be interesting to see. I truly don't have one guy I would like to single out, because I think there are a lot of guys who are all about the same.

So, do you feel the same about Coach of the Year, or do you think there's a coach who has really done an amazing job?

Charles: I have to say, I'm biased of what Bruce Pearl did at Auburn this year. To lose his two best players and win the SEC has been remarkable, especially with the stress they've been under with the NCAA investigation. I mean, they were picked 11th. Like I said, I'm biased. For them to win SEC after their two best players had not played all season. For them to win the conference, that's coach of the year material.

How deep did you go in a conference when you were at Auburn?

Charles: We made it to March Madness. I'm proud, it's cool for me. It's the first time (as an announcer) that I have ever had a chance to say, Auburn's going to be in the NCAA tournament. That's pretty cool for me.

Are you going to be able to handle that in studio? What's that going to be like as a supposedly unbiased reporter?

Charles: You know, I've got to tell you something, it's amazing for me, because we started out, were picked 11th, and then we lost our two best players, they hadn't played all year, and then for them to win a tournament, I mean it's the greatest season in Auburn history, in my opinion.

Jim: That's a tough situation to be put in. I've never been in that situation. My whole career. My alma mater Houston, and Kelvin Sampson, by the way, has done a great job. But we're going to be in the tournament this year. The first time ever, my alma mater—and my basketball program got me into the business, by the way. I was the PA announcer for the basketball team back in the Phi Slama Jama days, so that is my foundation, that group. I'm really close to it, and I'm ready for the challenge of broadcasting them on the air for the first time and really coming off as neutral.

Jim: Right. Gotta fight those emotions. But it'll be a thrill if that happens.

What do you think of the lack of a definitive favorite in this year’s tournament?

Charles: I tell you what, I’m not just blowing smoke, this is probably the craziest [season] I've ever seen. This form of competitive balance. I've said who my number one team was five times, and they all lost the next two games! If a Cinderella's ever going to win March Madness, this is the year. I thought Villanova was really good and they lost. I thought Michigan State was really good, then they lost. Virginia have probably been the most consistent team all year, but their style of play is dangerous. A friend of mine called me, he coaches for the Pelicans, and he said "If Virginia's going to do it, this is their year." But man, it is totally up for grabs.

Jim: I will say this is the year, because you take what some people term as the “blue bloods” of the sport, like Kentucky and teams on that level who have the tradition. If you take the top 16 teams in the country, the top four seeds in each region, Kentucky is outside of that. Kentucky's a five seed. Then you look at some of the other programs are going to be seeded outside of what their normal placement is. Louisville didn’t make it. Syracuse makes the First Four. UCLA makes the First Four. So it's all kind of upside down, and you have now, Xavier's a number one seed, Auburn's got a good seed. Clemson's has a high seed. Tennessee has a high seed. These programs that don't traditionally dominate college basketball are on the top, and a lot of the major programs that have the history and the pedigree are outside of the Sweet 16 seed. So, it's going to be a year where it's going to look different.

Charles: I'll say this, though. I think coaching is going to be really important. What I mean by that is, most of the time one team is superior than other teams. But we have all these teams right together. If a coach can make a couple subtle adjustments, they can beat a team. Like when you play some teams, you think, "We can't beat that team." But when you are on a level playing field or they are just a little bit better, coaching's going to be more important than it's ever been in this tournament. You can make a little adjustment here or there, and a number 12 seed can beat a five seed. That's why I think coaching is going to be really important this tournament.

Charles, what do you think about the one and done? It sounds like Adam Silver is thinking about getting rid of one and done and changing it.

Charles: I've never liked one and done. It hurts the NBA. These kids are not ready for the NBA. You go and look at the NBA landscape, none of these one and dones are really helping these teams the last three years, and it's hurting our project. I don't think it's fair to our fans in the NBA. If you've got a bad team, you used to get someone who was going to make your team better right away. Now you're getting a kid who might be good in three or four years. If I'm a fan, I don't want that.

So you think they should stay in college longer?

Charles: I think they should stay in college for two years.

Do you think it's more important for players to be involved in and speak out about social justice issues now?

Cheer your team to victory! Use the DIRECTV App to stream live March Madness® games on any device. Catch all of the action March 13 – April 2.

Jim Nantz, a three-time Emmy Award winner and five-time National Sportscaster of the Year, has covered virtually every sport for the CBS Television Network since joining it in 1985. This year marked Nantz’s 32nd covering the NCAA Division I Men’s Basketball Championship and Final Four.

NBA Hall of Famer Charles Barkley also serves as a studio analyst for CBS and Turner’s NCAA Division I Men’s Championship coverage. “Chuck” is also in his 18th full season as an NBA studio analyst for TNT’s Emmy award-winning studio show Inside the NBA.

Ad: Switch to AT&T Wireless now, and save.