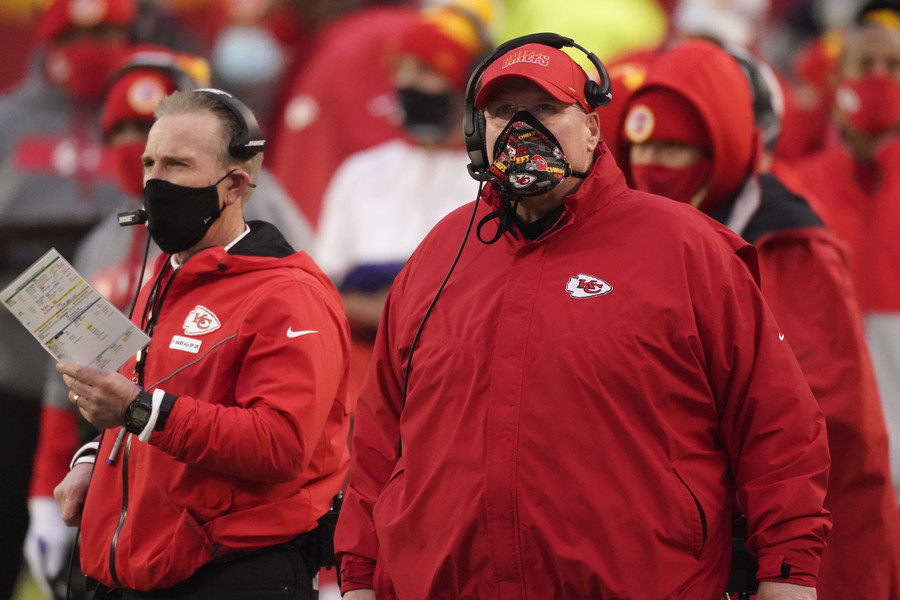 During a normal season, many of the players on the Kansas City Chiefs defense would leave the facility after a long day of practice and meetings and head to safety Tyrann Mathieu's house for weekly Thursday night festivities.

Some would be playing cards in the corner. Others watching the NFL game on TV. Plenty of wings would be eaten, especially by those big defensive tackles. They would laugh and joke, discuss the serious and not-so-serious.

“We're just bonding. We're just talking,” Mathieu explained, “about how we grew up, life outside the game. Talking about relationships, motivation. A lot of different conversations take place at Tyrann's place.”

The Super Bowl champs had to find other ways to bond this season, though.

With the specter of COVID-19 looming over them each week, the Chiefs were forced to eschew such get-togethers in order to keep the virus at bay. They would go through the same practices and meetings, albeit socially distanced, but then scatter at the end of the day, each heading home to their families or pets or an empty house to await another day of work.

Those bridges that are built during voluntary summer workouts were never erected, because those summer workouts never took place. Those bonds that formed during minicamp never materialized, because there was never a minicamp. All of those long, hot practices at training camp still happened, but it wasn't quite the same — there was no rough-housing in the cold tub after a workout, or good-natured ribbing in the dining hall, where players instead had to eat in small groups.

What the Chiefs did have was the luxury of many returning players.

Most of those close relationships were forged last season, when Patrick Mahomes and Co. led the Chiefs to their first Super Bowl title in five decades. And while a few players left in free agency, the vast majority of the roster returned intact, allowing them to essentially pick up where they left off when the season finally began.

They must have been strong: All the Chiefs did was parlay them into a 14-2 record, the No. 1 seed in the AFC and a first-round bye, allowing them to have this week off before the divisional round of the playoffs.

“They like each other, being around each other. It helps,” Chiefs coach Andy Reid said. “I'm not saying everything is always roses. It's like a family. You get in, you talk through things, you talk everything out, but in general, there's a certain strength you build with time, and I think these guys have developed that, and they laugh and cry together — one of those deals. And they have a good feel on when to bear down and when to mess around. That becomes important.”

Also important: Those veterans willing to take the rookies under their wing.

Running back Clyde Edwards-Helaire, linebacker Willie Gay and the rest of the Chiefs' first-year players didn't have those bonds from last season, nor did they have a typical offseason to build them. But the locker room leadership worked hard to incorporate them, despite social distancing and other hurdles that had to be overcome.

“We didn't have those Thursday nights at Tyrann's house,” Mathieu said, “so these young men have taken it upon themselves to carry themselves in a way that's respectable. Being around those guys, every day I feel like I'm the oldest guy in the room. I feel like I get a lot of life from those guys.”

They've also found ways to have fun, even if it's not in-person card games. Just look at Twitter, where there's been a running gag in which players find an old, often funny and rarely flattering pictures of a teammate to use as their profile pic. Mahomes even drew a chuckle from Reid when he posted a picture of Big Red from his playing days at BYU.

“I told Patrick, ‘Thanks for letting me feel young for one more day,’” Reid said with a droll grin. “I mean, that was great. So, I had hair, the whole deal, actually veins in the arm. That’s not bad.”

The kidding isn't just among stars, either, a testament to the close-knit nature of the entire locker room. Take tight end Travis Kelce, who posted a picture of sun-burned practice squad wide receiver Gehrig Dieter from college.

“You can talk and do those different types of tings, you just can't be around people for long periods of time, which is definitely different,” Mahomes said. “This last week in practice, we were letting the (backup) guys get reps and me and Travis were off to the side. I'd talk to him, walk away for a little while, talk to him again, move away. Which can be a good thing. You end up talking to everybody on the team, not just one or two guys.”

Maybe the pandemic has helped the Chiefs to form those bonds after all.

This article was written by DAVE SKRETTA from The Associated Press and was legally licensed through the Industry Dive publisher network. Please direct all licensing questions to legal@industrydive.com.