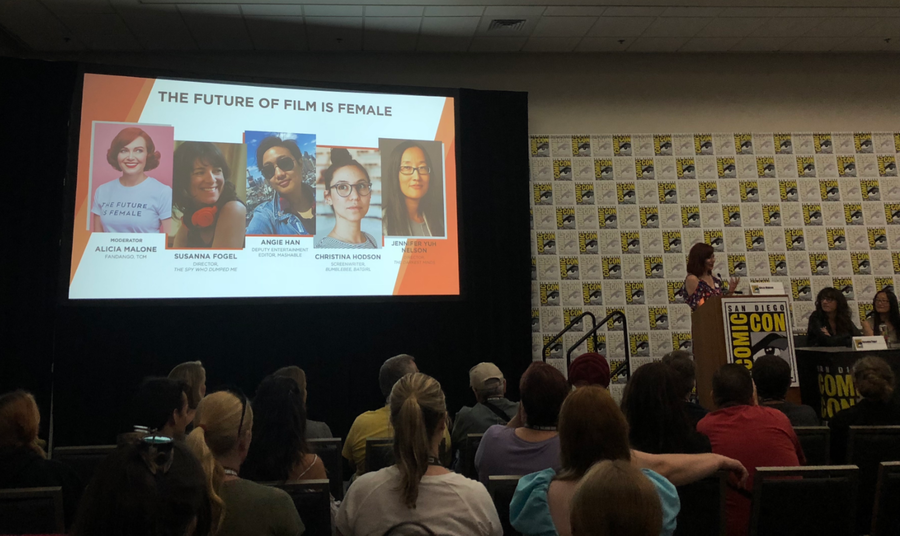 Comic-Con Takes a Stand: The Future of Film is Female

Moderator Malone kicked off the panel by referencing a troubling statistic — panelists Fogel and Yuh Nelson also happen to be the directors of this summer's only films directed by women: The Spy Who Dumped Me and The Darkest Minds. That's two movies out of about 50 scheduled for wide release between May and August. Both films are also debuting on the same day.

Shortly after, Han pointed out that "When [Malone was] introducing everyone, I kept hearing the words first or only. That tells you the state of women behind the camera right now."

She referenced the USC Annenberg study that says something like only 4 percent of the 1,100 top films from 2007 to 2017 were directed by women.

Calling aspiring female filmmakers! Submit your own comedic short about female friendship to the #SpyWhoDumpedMe Female Storytellers Contest for a chance at $15K toward your next project and a screening in LA! If you're the next @SusannaFogel, get info at: https://t.co/CHV5vVVKsP pic.twitter.com/a0U3Fje9Y6

Fogel put some perspective on how this feels.

"To be in such a small group can be depressing. Each female-directed movie carries so much weight and a lot of pressure. There's so much political weight on everything you do."

As the first (and last) female director to solely direct a major Hollywood animated film, Yuh Nelson has had to confront many challenges and preconceived notions. Her self-described "zen" style of directing was vastly different than people expected from a director.

"When people see a director on set, they want someone who makes them feel like they're in control on set. I don’t look the part. I don’t want to bully anyone to do anything. I had to figure out my own way of doing things."

Now that Hodson is working as a screenwriter, she's doing everything she can to ensure that girls have positive role models in movies. She wrote the script for the upcoming Transformers spinoff, Bumblebee, which will feature a rarity among action films: a female lead (Hailee Steinfeld).

The recent success of Fogel, Yuh Nelson, and Hodson is inspiring, but there's still a lot more progress that must be made.

"I really fear that people are going to get tired talking about it [film becoming more inclusive]. I know lots of people who say 'We need more women filmmakers,' but then it gets easy for them to make excuses later."

Everyone on the panel and a lot of the audience nodded in agreement.