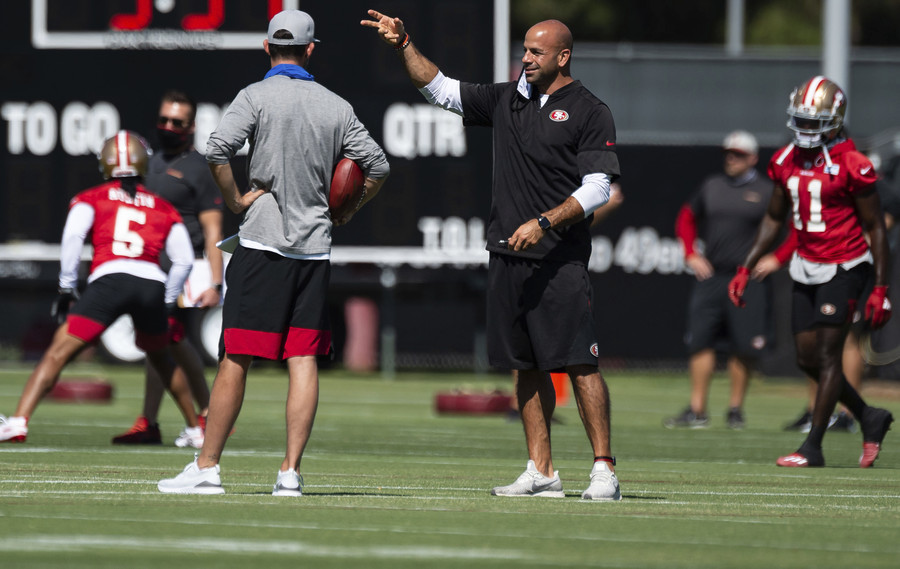 An offseason centered around Zoom meetings, an abbreviated training camp and the absence of exhibition games made continuity more vital than usual in this year of the coronavirus in the NFL.

The joy San Francisco 49ers coach Kyle Shanahan experienced last January when trusty defensive coordinator Robert Saleh was passed over for the head job in Cleveland has become even more pronounced. Similar feelings have reverberated around the league among coaches with the benefit of stability on their rosters and staffs after the COVID-19 pandemic made the process of installing systems and building chemistry more challenging than usual.

No club has as much continuity this season as Shanahan's defending NFC champion Niners.

Their coordinators and key assistants are all back, as well as most of the contributing players who anchored last year’s turnaround season. According to a study by SportRadar, the 49ers return the highest percentage of overall snaps played last season (81.6%). The defense also has a league-high 87.2% of snaps returning.

“It’s definitely a lot more easy on your anxiety when you can’t go in and you can’t meet with the players except on Zooms,” Shanahan said, reflecting on the offseason program that largely took place behind a screen. “We’ve added a few different guys player-wise and we have added a couple of different coaches, but the foundation of our team and especially our defense and our defensive coordinator, that hasn’t changed. I do think that helps a lot, especially where we left off."

The 49ers are one of three teams bringing back players who participated in more than 80% of snaps last season. Buffalo (81.5%) and Indianapolis (80.3%) are just behind. Though the Colts acquired a new quarterback, Philip Rivers, the Bills brought in big-play wide receiver Stefon Diggs, and left tackle Trent Williams stepped in for the Niners, Rivers and Williams at least have previous experience with their new coaching staffs, easing the transition.

New Carolina Panthers coach Matt Rhule and his staff have faced quite the opposite this summer.

Rhule is one of five coaches taking over a team. He also is transitioning from college to the pros, with the only club that has a new head coach, projected starting quarterback and coordinators.

With stalwarts like Cam Newton, Greg Olsen, Luke Kuechly and Trai Turner all departed, the Panthers are the only team with less than half of the snaps last season returning (49.9%), with a league-low 35% on defense and third-lowest 58% on offense. Fortunately for Rhule, new quarterback Teddy Bridgewater has familiarity with offensive coordinator Joe Brady’s system, having spent the 2018 season together in New Orleans.

“There’s no playbook for this time. It isn’t like you can call up the other NFL head coaches and commiserate and say, ‘Hey, how are you guys handling this?’ You kind of have to figure it out on your own. So, that has obviously been challenging," said Rhule, who estimated he had met about 20 of his players before the start of training camp last month.

Raiders coach Jon Gruden can relate. While the Raiders have the largest share of offensive players (94%) returning from last season, with rookie Henry Ruggs III the only new projected starter on that side of the ball, defense is a different story. The Raiders figure to have at least five new starters there, all while adjusting to new surroundings after the offseason move from Oakland to Las Vegas across the California-Nevada border.

“We are not the lone ranger. Everybody in the league is going through this,” Gruden said. “It’ll be a challenge, and we’re going to try our best to put them under as much pressure as possible with formations and different tempos to try and get them ready.”

The concept of continuity can be viewed through different lenses, of course. In Minnesota, the defense that has been the backbone of coach Mike Zimmer's seven-season tenure ranks only 19th in stability this year with 62.6% of snaps returning. The Vikings have five starters to replace.

But for young players such as cornerbacks Mike Hughes and Holton Hill elevated to bigger roles after the veteran departures, the philosophy and terminology of the system has stayed the same.

So why is so much value placed on continuity across the league? Well, turnover is one of the names of the game. Players have short careers and non-guaranteed contracts. Competitive pressures keep the hiring-and-firing cycle for head coaches and their assistants spinning steadily.

“You’ve been through a whole season with them and through the game plan, so when you’re making tweaks or you’re trying to try something new, you’ve got some, ‘Hey, remember when we did this, this week when we’re playing in Baltimore? This is something we want to try,'” said Tennessee Titans offensive coordinator Arthur Smith, pointing to the “clarity” that comes from quick recall.

Less than one-third of the league will return the same head coach, play caller and quarterback from last season. That doesn't include the Vikings, because Gary Kubiak was promoted from his adviser role to replace Kevin Stefanski after Stefanski took over the Browns. But Stefanski was directing the system Kubiak has long designed. Quarterback Kirk Cousins will have his fifth play caller in five years, but the concepts of the offense he'll be guiding in 2020 will be the same as in 2019.

“Change is seemingly a constant in this league," said Cousins, who's entering his ninth NFL season and third with Minnesota. "It’s rare to have continuity, but you appreciate it when you get it.”

Veteran coaches can recall a similar predicament nine years ago when a lockout by the owners wiped out the entire offseason program. But at least teams trying to fit in new pieces that season had four exhibition games to help get up to speed.

Now the newcomers like new New England quarterback Newton on a Patriots team altered by free agent defections and coronavirus opt-outs won't have a chance to match up with another team until the season opener.

The Patriots have the second lowest percentage of snaps returning (56.9%), but that's not about to bother the longest-tenured coach in the league.

“That’s what college teams do every year," coach Bill Belichick said, adding: "That’s the way it’s been. You go to camp for three weeks, then you start the season."

In 2011, the stable Patriots lost the Super Bowl to another team that brought back many key pieces, the New York Giants. Then again, San Francisco won 13 games and made it to the NFC title game under first-year coach Jim Harbaugh.

So is continuity actually a championship harbinger or more of a nice-to-have thing in a league with such a fine line between winning and losing?

“The thing we have to be aware of is games aren’t won this time of year,” Bills coach Sean McDermott said. “Games aren’t going to be won just because of continuity. So we’ve got to make sure that we take that continuity piece and build on it.”

This article was written by JOSH DUBOW and DAVE CAMPBELL from The Associated Press and was legally licensed through the Industry Dive publisher network. Please direct all licensing questions to legal@industrydive.com.