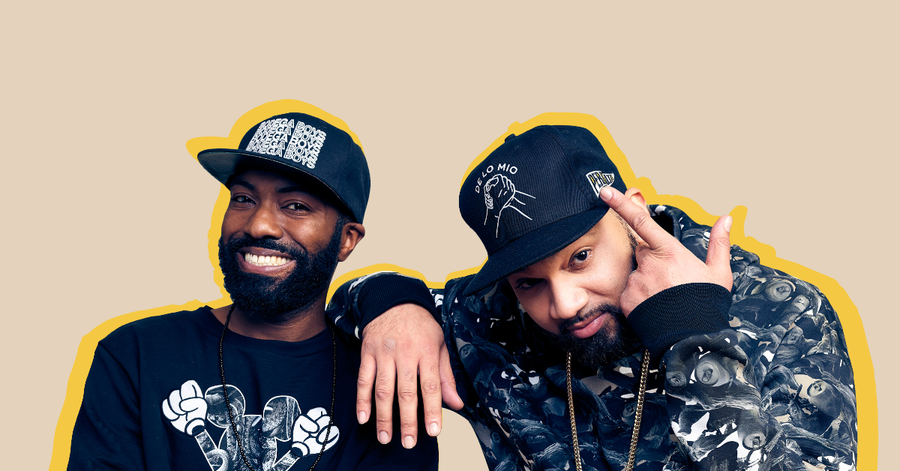 When Anna Kendrick goes on talk shows, she often gets asked to sing. The Pitch Perfect star has staged mini-musicals with James Corden and broken into show tunes with both Stephen Colbert and Conan O’Brien.

But when Kendrick appeared on Showtime’s talk show Desus & Mero this week, she didn’t sing. Instead, she joined its eponymous hosts at the strip club. In a romp through the Bronx, Kendrick and the pair threw money inside the club and shot dice outside it, all while discussing baked goods and how to get the best discounts at The Container Store.

In case it wasn’t clear: Desus Nice and the Kid Mero aren’t your parents’ late-night hosts. If other comedians dance right on the edge of the line, the Bronx natives stomp on all over it in their Timberland boots. The pair, born Daniel Baker and Joel Martinez, respectively, has risen to prominence over the last few years through their lightning-quick rapport and encyclopedic knowledge of culture: first on a freewheeling podcast, and then on an equally shaggy talk show on Viceland.

But with their arrival on Showtime, the pair faces their biggest challenge yet: How do they balance their specific sensibilities with their larger aspirations toward cultural saturation? “We always want to get to that Kevin Hart point, where you’re just like, ‘God damn, they’re in this too?’” Desus says.

On the broadcast networks, late night is still dominated by white men. But on cable and streaming, the landscape has been invigorated by a diverse set of comics with hyper-specific worldviews and life experiences, from Samantha Bee to Hasan Minhaj to Busy Philipps. Likewise, Desus and Mero’s proud distinctiveness serves them well in this fractured cultural moment, in which the big tent of entertainment has caved in.

But it’s been a long road for Desus and Mero to arrive at this point. Before they turned to entertainment full-time, Desus, who is Jamaican-American, worked odd jobs around the city, including for a black financial magazine. Mero, who is Dominican-American, was an aide at a public school in the Bronx by day and a music blogger by night. “I remember sitting in an old dusty recliner that probably had bed bugs until 3 in the morning to write a music review for literally $50,” Mero says.

The pair connected on Twitter and launched the podcast and web-series Desus Versus Mero in 2013, which they recorded sitting on milk crates. Two years later they started appearing on MTV and began the cult favorite podcast Bodega Boys, an unstructured and virtuosic series of exchanges focused on internet and hip-hop culture. In 2016 they signed on to host a talk show similar to their new one as part of Viceland’s early wave of programming to court millennial audiences.

That daily show brought them wider recognition but ended in an acrimonious departure; the pair still throws barbs at Vice on their podcast, and have talked about feeling “undervalued” by the network. “The rate we were going was not sustainable,” Desus says. “We literally would have just quit.”

When the pair announced their move to Showtime, they were met with raucous enthusiasm but also anxiety that the pair’s most uninhibited impulses and deep dives into black culture would be diluted by the bigger platform. “I’m nervous now about Desus/Mero moving to Showtime,” Questlove, the drummer of the Roots, wrote on Twitter. “I cringe at upgrading in almost every situation.”

When I show him the tweet, Desus responds by flipping Questlove’s own history back at him, citing how the Roots’ progressed from their early classic Do You Want More?!!!??! to 1999’s Things Fall Apart. “I was one of those haters, saying, ‘I miss the old Roots. It’s not stripped down enough,’” Desus says. “But Things Fall Apart is an amazing album—they had Common and actual breakbeats and could clear samples. Artists have to grow.”

For Desus and Mero, growth on their new show includes acting in sketches—including a lacerating parody of Green Book—field pieces, and higher-wattage interviews. Compared with their staff at Viceland, their staff has more than doubled, giving them a writer’s room—a strange luxury for two comics who excel when working by themselves and on the fly.

This writer’s room doesn’t pen typical monologue jokes, though. At a writer’s meeting in March in midtown, there was nary a pun or political joke to be heard; the team instead whizzed through riffs on hipster wrestling, Goyard-themed Nascar teams and the ill-fated Inwood party haunt La Marina. The writers’ jobs are not to write punchlines but mostly to create prompts that spark the duo’s sharpest energies. “It’s so different from other writer’s rooms, because a lot of it is just getting out of their way,” head writer Michael Pielocik, who left his job at The Late Show With Stephen Colbert to join them, says.

So far, the creative and financial upgrades have allowed Desus and Mero to be the most indulgent and raucous versions of themselves. They have thrived in field visits to their home territory, from bantering with bodega owners to writing a song about butts with John Legend. The writer’s room has also delighted in surprising the pair on set with online-born oddities, like a machine that made squashy pancakes that were supposed to resemble their faces.

“If we’re in a cafeteria, all the late-night guys are over there,” Mero says, motioning with his hands, “and we’re over here doing the Clipse beat on the table, throwing sh-t across the room.”

Yet as much as Desus and Mero revel in their outer-edge appeal, they’re also gunning for the center of the cultural world. Mero likens this incarnation of their brand to “lap two of the Daytona 500”; they have a book deal with Random House, will continue hosting comedy tours and hope to eventually host awards shows and act in dramatic films. “Wait until I’m in a Tyler Perry movie doing a wild dramatic role,” Desus says, flipping into high gear: “‘Mamma, we ain’t got the rent!’”

In the present, show is still working through growing pains. Ratings have been soft, and the pair cut down the studio audience after the first show’s large crowd felt too impersonal. They moved interviews offsite and back to their cozy den in hopes of decreasing awkwardness. They’ve also realized the necessity of self-censoring some of the more risqué jokes that would have flown on the podcast, especially since their executives at Showtime have been hands-off: “They give you enough rope that you could hang yourself,” Desus says.

And the pair will have to figure out how to navigate the political world, a requisite in a late night landscape that is dominated by commentary aimed at President Trump. A visit to their old Bronx friend Alexandria Ocasio-Cortez’s DC office made for warm and engaging television—but a trip to Troy, NY with Kirsten Gillibrand came across more awkwardly; she failed to recognize Desus’s use of the word “banging” when describing food.

“You don’t want to allow yourself to be weaponized for a candidate to pander to people of color,” Desus said.

But while Desus and Mero might not be a finished project, it’s still rife with high-flying, gasp-inducing humor and serves as a blast of fresh air to the late-night landscape. “If you turn your TV on and want Jimmy Fallon and the Roots, that’s there for you,” Desus says. “If you want something a little jarring, a little edgier, a little scary—we’re there.”

This article was written by Andrew R. Chow from TIME and was legally licensed through the NewsCred publisher network. Please direct all licensing questions to legal@newscred.com.