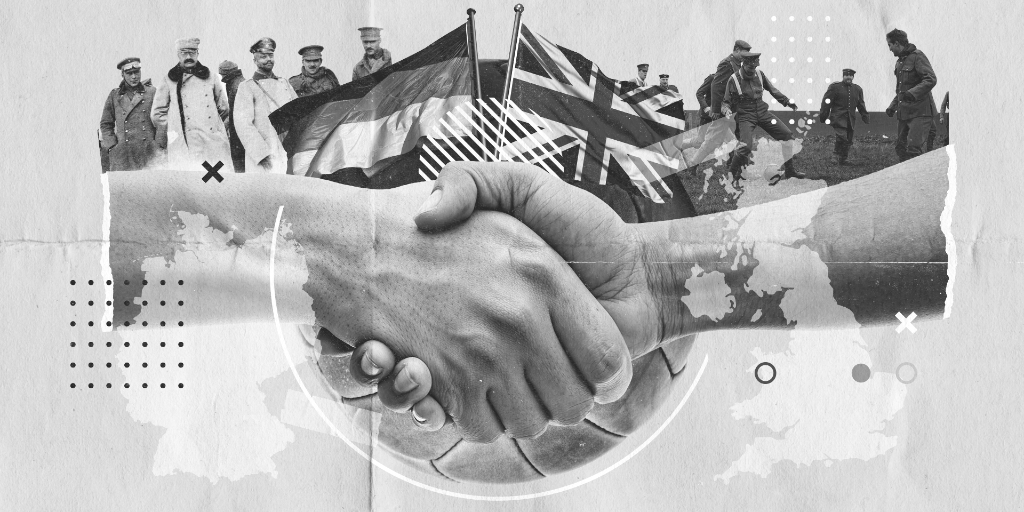 Europe, 1914. Trenches scar the earth from Belgium through France and down into Switzerland. The Great War has been roiling on for months, much longer than the soldiers were told it would. It's sleet and frozen, and there’s mist in the air. Everyone is miserable and cold. But come the evening of December 24, the bombing stops as the front becomes unnervingly quiet. Across the barbed wire fencing, the British soldiers see some candles on small Christmas trees along the German trenches.

Then they hear the singing. "Silent Night."

The Wall Street Journal writes: “What appears from the winter fog and misery is a Christmas story, a fine Christmas story that is, in truth, the most faded and tattered of adjectives: inspiring.”

Soldiers timidly emerge from their respective trenches and meet in the middle. They shake hands, trade presents, bury the dead, make halting conversation (some of the Germans had worked in Britain), and cut each other’s hair. Then they play a game of soccer.

It’s an evocative image—opposition soldiers kicking a ball in no man’s land—one that's become the setting for children’s novels, movies, and an ad for a British supermarket.

In 2014, British and German military teams played an international soccer game to commemorate the 100th anniversary of the WWI Christmas truce match.

The only problem? That all might be commemorating an event that never happened.

The truce was real. It likely covered two-thirds of British-held trench line in southern Belgium. Hundreds of soldiers greeted each other between enemy lines. But the soccer match is less firmly documented.

Most accounts are second- or third-hand. After the Sainsbury's commercial aired, The Times of London published the first reporting on the event, a letter by a doctor in the Rifle Brigade. It was hearsay—as in, he heard about it but didn’t actually witness it. (Also, The Times censored the regiment out of the letter, so it can’t be checked for accuracy).

Two accounts say the Germans won 3-2. Neither seem credible; many accounts of the truce make a point to mention that no one kept score.

But, as The Times reports, there are two instances with multiple recollections of soccer games being played: Wulverghem and Frelinghien. Well, “games” may be a bit too strong a word. Kickabouts, perhaps.

Soccer had been played professionally in Europe since 1888. It was popular. And it’s easy. Most of the retellings mention using coats or hats for goalposts, or creating makeshift balls. It likely wasn’t one singular game. There certainly weren't any referees.

Even the word "truce" is subject to interpretation. There was a smattering of cease-fires all up and down the front, some sanctioned by officers, others impromptu. In some areas, the fighting persisted straight through Christmas Day.

But it seems likely that in a few areas, some soldiers kicked a ball around, and a couple of these events may have involved soldiers on opposite sides of the conflict. Ernie Williams of the Cheshire Regiment wrote about a later "game" played on New Year’s Eve. It gives an idea of what a battlefront soccer match would have looked like. “There was no referee and no score, no tally at all. It was simply a mêlee—nothing like the soccer that you see on television. The boots we wore were a menace—those great big boots we had on—and in those days the balls were made of leather and they soon got very soggy.”

A couple dozen underfed teenagers running around in heavy boots chasing a sopping wet ball in the shivering cold is an image that won’t sell much at the supermarket.

But apart from effective advertising, why do we want the Christmas truce soccer game to be real? There are a few possible reasons.

The first is that the game was as mundane as much of war is. There was a brief, inconsistent truce that neither side allowed to happen again. But, like the rest of the war, it became grandiose and noble upon the retelling.

The second is that it happened and was covered up. A few stray letters home got out, but officers and generals needed to make sure nothing like it happened again. The war continued for years after. They couldn’t have enemy soldiers realizing how much they had in common.

“I then came to the conclusion that I have held very firmly ever since,” a British soldier said in 1930, “that if we had been left to ourselves there would never have been another shot fired.”

This is perhaps overly optimistic—there are accounts of one side trying to initiate a truce and seeing bullets whiz above their heads in reply. But the sentiment is powerful. The truce game showed back then that there weren’t very compelling reasons to continue killing each other. Today it continues to affirm our collective humanity.

The simplest explanation is that it was messy and complicated and tiny and scrappy, but we want Christmas memories to ring as clear as silver bells. So we romanticize the Christmas truce, simplify it, sell holiday toys with it. War stories make up part of our cultural canon, especially when they're better than the real thing.

“I remember the silence, the eerie sound of silence,” British soldier Alfred Anderson told The Observer. “It was a short peace in a terrible war.”