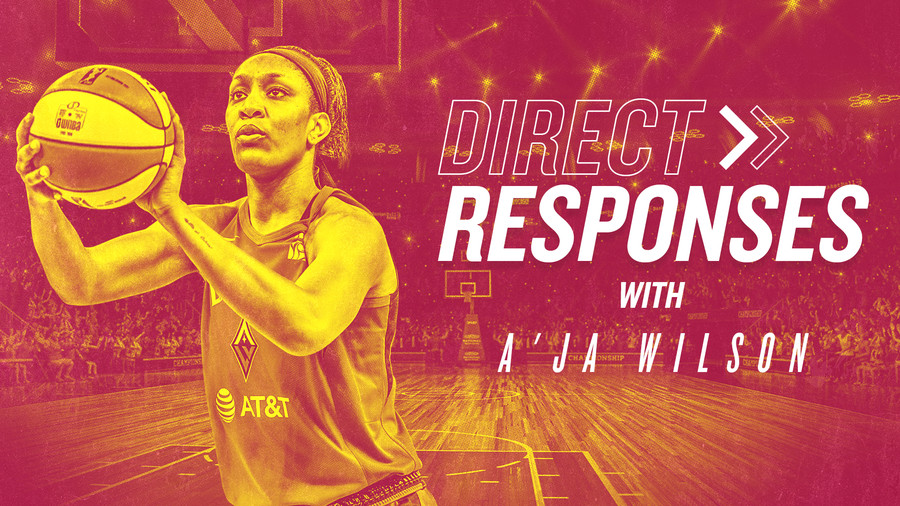 Coming out of a timeout during a recent game against the New York Liberty, the Las Vegas Aces made a play intended to both stem the tide of a Liberty run and reflect the strengths of the current roster.

A'ja Wilson, the star second-year 6'5” forward out of South Carolina and newly minted 2019 WNBA All-Star, got a touch. But so did Liz Cambage, the team's 6'8” center, and the woman who’s scored the most points ever in a single WNBA game.

It's one of many adjustments Wilson is making, one as difficult as any for a player who’s carried every team she's ever been on: to be a star among stars, to internalize that not every offensive possession should end with Wilson taking the shot.

So far, it's going well, to put it mildly: Vegas won that game, 90-58, and is among the WNBA's league leaders in offensive categories across the board.

Credit Wilson, who was Las Vegas' go-to scorer last year en route to winning Rookie of the Year honors, for embracing her role so quickly.

“It's a state of who we are right now,” Aces coach Bill Laimbeer said of the Cambage-to-Wilson moment following the game. “They're learning each other very well. A long way to go, obviously. We've got to incorporate our guards a little bit more, but A'ja and Liz are starting to understand who they are.”

It's all led to the Aces jumping out to an 11-5 start, tops in the WNBA's Western Conference. The team is scoring in bunches, but making its claim for the league title on the back of a pair of team-wide skills: playing at the fastest pace in the WNBA, and posting the league’s best defensive efficiency.

It's a big step for a team that’s showed flashes of progress, but didn't even make the playoffs in 2018.

“We went from not even making it to the playoffs last year to now people saying we're going to win it all,” Wilson said following the game. “That's one of the quickest turnarounds I've ever been through, been a part of, but I think we're doing a great job of not letting it get to us too much. We know that we still haven't won anything. We know that we still have to work ten times harder because we have that target on our back, but I think it just fuels our fire and we just keep going.”

Wilson grew up in South Carolina, and is no stranger to building projects. Dawn Staley had taken over as head coach at University of South Carolina, to some success, but the program didn't reach the elite level until Staley secured Wilson's commitment. She became a defining player for the Gamecocks, winning a national title in her junior season, even as Staley broadened and defined Wilson's game in preparation for the next level, a professional grind Staley knew firsthand.

While some coaches would have relied upon Wilson's size to beat up opposing collegiate centers, Staley played her alongside another big, now-Minnesota Lynx center Alaina Coates, and let Wilson develop wing skills instead.

Simple for Wilson, maybe, but anything but easy for most players. And yet, she made a seamless transition from the slower-paced Gamecocks to Laimbeer's Aces, finishing third in the league in scoring as a rookie at 20.7 points per game. Wilson added top-ten finishes in rebounding rate and block rate, and turned the ball over less per 100 possessions than anyone except Elena Delle Donne of the Washington Mystics. She was an easy choice for the All Star team, and improved a team that earned the right to draft her with an 8-26 mark in 2017 to 14-20.

Now, with Cambage at center, and scoring weapons like Kayla McBride and Kelsey Plum on the perimeter, Wilson’s counting stats are down, but her efficiency is up — she's third in the WNBA in field goal percentage so far this season.

Other stars might struggle in an egalitarian offense, but Wilson says she relishes it.

“It definitely relieves a lot of pressure, knowing that you're not that go-to,” Wilson said. “I think we have a starting five [where] anyone can score the basketball any time. That's always good. You need different weapons. You need a healthy balance in the team. I think that's what we have, so I don't feel any pressure at all. Last year I kind of felt it with the number one pick and all that jazz, but this year [we’re] just gonna play together.”

The pleasure of playing collectively is evident throughout the roster. Cambage said she's looking to “chase a triple-double” out of passing to Wilson, and indeed, she's set her single-game high in assists, mostly because she has found more and better passing lanes to Wilson this year.

It all stems from a conversation Laimbeer had with his team this preseason.

“They all, as a collective group, said they want to go and see what they can do as a team and make sacrifices,” Laimbeer said. “I made it very clear to them and some days it's a struggle...It's a collective thing by our team to make the commitment that whatever happens this year, we're going to do it together.”

Game to game, possession to possession, Wilson's getting more comfortable with her role. In that same first half against the Liberty. Plum stripped the ball from a New York player, and in a single motion found McBride streaking down the floor, who turned and fired it to Wilson, whose long strides put her by the rim at precisely the right moment to grab the pass and lay it into the basket.

“You know that the times that you do have those shots, you've got to capitalize on them and just really lock in and focus,” Wilson said, struggling to keep her smile under wraps. For the Aces, it doesn’t matter who finishes the play. But even the most selfless superstar never gets tired of filling up the stat sheet.

Introducing a new feature from DIRECTV. We’ll be asking sports’ biggest stars to tell us what they’re watching, on and off the court. Here’s what A’ja Wilson had to say.

1) What do you watch for during a game that tells you whether you're going to play well?

AW: I watch how defenders are playing their posts.

2) What’s an interesting thing to watch for that the average fan may not be aware of?

3) Who's your favorite player to watch, in your sport or others?

4) Besides game film, what have you been watching lately?

AW: I watch everywhere. My hotel room, my room, and also on the plane. Normally at night. That's where I really get in my shows.

6) If you didn't play basketball, what sport would you want to play?

Volleyball. Volleyball is my first love and something I will always cherish. I just respect that game so much.