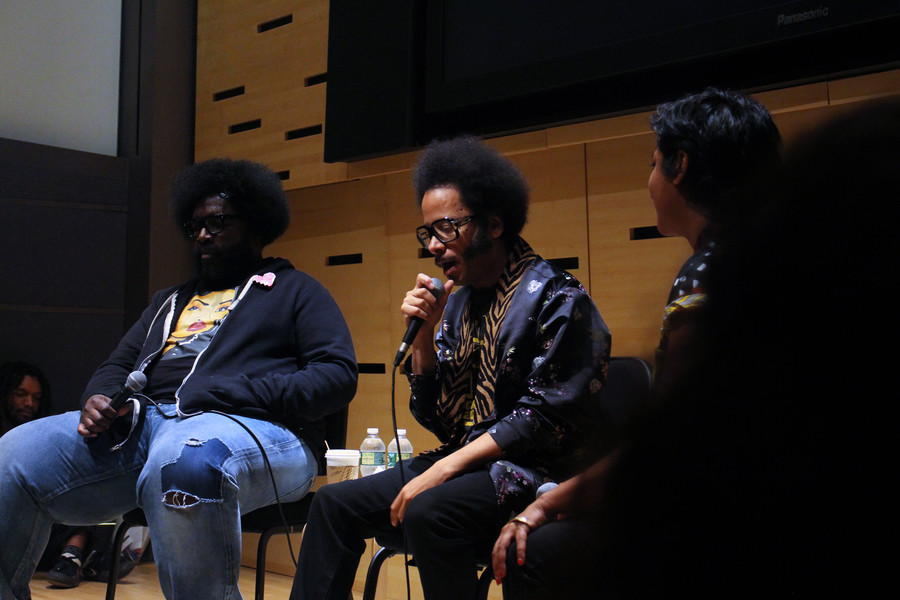 Sorry to bother you, but I think Boots Riley may be this year’s best new director – yes, the same Boots Riley from The Coup.

This week, Boots was at Lincoln Center to talk about his debut film Sorry to Bother You. Joined by special guest Questlove, the writer and director talked the inspiration behind his film, his long journey to get it made, and new projects he has lined up. With this film, Boots is proving that he’s not just a musician with a script. He is a visionary filmmaker who has created what could be an awards-season favorite.

I’ve tried to come up with a good line to capture the essence of this film, but I don’t think anyone does it better than Boots himself. According to Boots, Sorry to Bother You is “an absurdist dark comedy with magical realism” that follows the life of Cassius Green (say that one out loud) at his new telemarketing job. The catch – the only way to climb the corporate ladder is to use his “white voice.”

But, as Boots explains, this “white voice” isn’t just an unfortunate reality for black people. This voice is a performance that’s racially universal. It’s a facade to prove to everyone around you that your life is perfect. The bills are paid; work is booming; the family is happy and healthy. It’s something that everyone can relate to, regardless of race.

Questlove chimed in to note how realistic the film was for him, adding that “literally everything that happened in the movie happened to me at one point.” In fact, his first job was working as a telemarketer, which is how he paid to produce The Roots’ demo back in 1992. He also shared a conversation he’d had with Dave Chappelle early on his career, in which Dave argued that there are two languages for black people – Ebonics and job interview. And this couldn’t ring truer than in Cassius’s experience working at Regalview.

Throughout the conversation, we talked about the battle Cassius faces, like many black people, in the workplace. There’s this unspoken, inner conflict between wanting to excel, but not too much that you may hinder your friends or community. It begs the question, what separates success from selling out? And who decides that? It’s a subject that’s often too taboo to talk about, yet Boots does it so seamlessly throughout the film. In crafting the character of Cassius, Riley follows in the footsteps of director John Singleton's protagonists in Poetic Justice and Boyz in the Hood, injecting humanity throughout his journey.

My favorite part of the night was hearing about Boot’s creative process. It’s clear, even from just watching the trailer, that Boots likes to play with color and dimension, but what struck me most was hearing about his interest in creating “a beautiful clutter.” I think there’s often pressure on new writers to be overly detailed and purposeful with their symbols in order to be taken seriously, so it was awesome to see Boots throw that to the wind and create a style that was all his own. A great example of this “beautiful chaos” is in Cassius’s bedroom. It’s covered from floor to ceiling, with various knick-knacks, but it doesn’t feel “messy.” Instead, it’s a visual treat, giving us a closer look into his personality simply by scanning the posters on his walls. And, as he gets higher up in his position, his walls become increasingly cold and bare, mirroring the shedding of his own morals and personality for corporate greed.

From start to finish, you can tell that Boots is deeply thoughtful. He means what he says and he has the same rich authenticity that we see in his characters. As far as future projects go, Boots already has a few things lined up, including a TV deal with Michael Ellenberg – yes, the same Ellenberg who brought Game of Thrones to HBO! And as for the direction of the show, it’s still pretty up in the air. Boots says he has “about 20 or so ideas right now” adding that “13 of them are good and a bunch of them are great!” He quickly followed this up with a humble, “who knows, though. Maybe it will suck!”

… we highly doubt that, Boots!

If you still haven’t seen the movie, get to a theater immediately! This is one of those special films that only comes around once in a blue moon. And, you’ll probably want to see it a few times to take it all in.