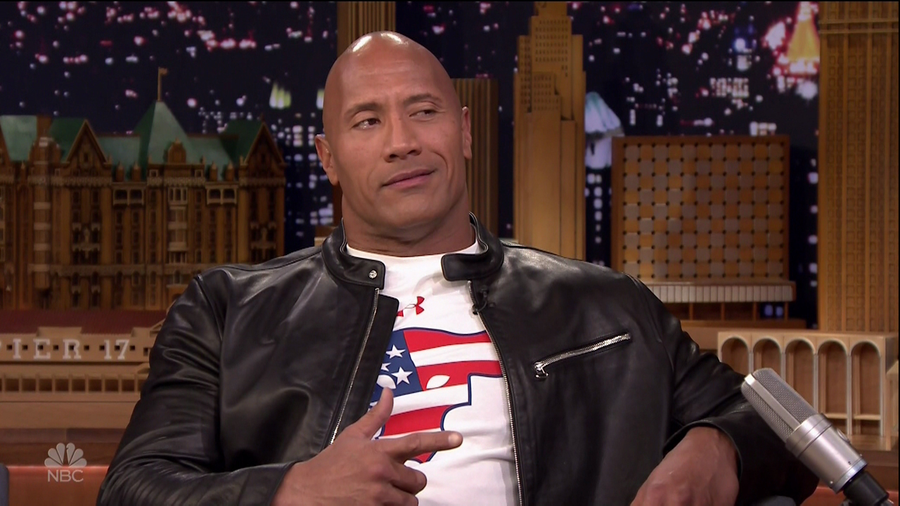 DIRECTV Investigates: Why Does Everyone Love The Rock?

Dwayne “The Rock” Johnson didn’t become the highest-paid actor in Hollywood by accident. The former pro-wrestler turned leading man has amassed a passionate fanbase that even includes Senator Elizabeth Warren.

After years as the biggest star in the WWE, he’s headlined blockbusters like (the best) The Fast and the Furious films, Jumanji 2 and Moana. This month, his HBO original series Ballers returns for its fourth season.

But how has an Adonis-like wrestler-turned-action-hero-turned-national-treasure become such a beloved actor he makes Tom Hanks look like Darth Vader?

We asked the two biggest Rock fans we know, writers Bobby Hankinson and Andrea Reiher, to try to break down what exactly goes into the special sauce of this superstar.

Andrea: Do you remember when you first fell for the Rock?

Bobby: The year is 1996. I just turned 11. Pro-wrestling hasn't quite hit the big mainstream popularity it would over the next few years. I'm in Madison Square Garden for Survivor Series and the in-ring debut of Rocky Maivia. He comes out with this adorable curly mop of hair and a megawatt smile that you could see from space (or at least the nosebleed seats). I've been a fan ever since.

Andrea: For me, someone who hadn't followed wrestling since the days of Million Dollar Man Ted DiBiase, I became a Rock fan via his appearances where he made fun of his own persona — MadTV, Saturday Night Live, Punk'd. He just always seemed so fun and he really embraced what made him famous but also wasn't afraid to poke fun at it. You gotta love that kind of confidence and humility.

Bobby: YES. That's the thing about him. Even though he's the highest-paid actor today, he's not ashamed of where he came from. There's even rumor of him wrestling in next year's Wrestlemania.

Andrea: No kidding?! That would be kind of awesome.

Bobby: There are rumblings that he's going to wrestle Roman Reigns, who in real life is his cousin. He's part of a huge family of wrestlers including his grandfather Peter Maivia, father Rocky Johnson, former women's champ Nia Jax and more.

Andrea: And recently, his eldest daughter, Simone, said she wants to go into wrestling and he is her biggest cheerleader. I love what a family man he is. He has three daughters and he has posted several things to social media celebrating girl power and supporting them.

Girl power. To every woman out there ‘round the world - all ages and races - I proudly stand by your side to always honor, protect and respect. Especially, the loves of my life at home. Now if I can just get Jazzy to say the daddy is the most handsome, brilliant, sexiest man alive part, then we all gonna be cool. #MyAnchors #InternationalWomensDay

Bobby: I saw that! I love how excited he gets for her. She was once a Golden Globes Ambassador, too.

Andrea: Yeah. I think he strikes a nice balance on social media of sharing a little about his family but not too much, you know? Gives people a glimpse into his life without exploiting them. But the things that I love that he shares all the time on social are his fan interactions. It seems like he always has time to talk to a fan or take a picture with a fan, which is so cool. I would imagine that fan interactions would get really tedious sometimes for famous people, but he never seems to mind. And you never hear about him being a jerk to fans.

Bobby: Never! Any time anyone compliments him or one of his films, he personally replies. He must spend hours just replying to tweets. Plus, have you seen his Insta? It's more inspiring than a million "Hang In There" kitten posters.

Andrea: But can we also take a minute and appreciate how good looking he is? Because there is also that. The muscles and mega-watt smile don't hurt, but he's also just so approachable in his hotness. Like there's a charm and charisma about him that a lot of famous people do not have.

Bobby: I truly could spend days thinking about his arms.

Andrea: I'm a very tall woman, and I love when famous people are as tall as you think they are. He is genuinely a huge man.

Bobby: He's also super stylish. Other big guys (like fellow wrestler attempting to go Hollywood, John Cena) always look like they're wearing a tent. The Rock always looks like chic … Question, on the record: What do you think the Rock smells like?

Andrea: Oh man. I like to imagine it's Hugo Boss. And sweat. But not in the gross way. What do you think he smells like?

Bobby: Like a really nice beach with notes of sandalwood. Not that I've thought of this before, but IF the Rock was, say, rescuing me from the side of cliff (a la the opening of San Andreas), as he cradled me in those massive arms back up to the chopper, that's what I imagine he would smell like.

Bobby: That's why I think he makes such a compelling action hero. Who wouldn't want to see him arrive when they're facing certain death?

Andrea: Yes! But he also does comedy really well. I was pleasantly surprised by how funny Jumanji [ed: Welcome to the Jungle] was. The whole cast was really great, and he anchored it.

Bobby: Absolutely! Personally, my favorite Rock role has got to be Maui in Moana. His song "You're Welcome" is basically weaponized charm.

Andrea: And he does his own singing! He really is a Renaissance man. I also love his buddy comedy vibe with Rob Corddry on Ballers. He's terrific on that show; I tell my sports fan friends all the time that they should watch it (if they don't already, most of them do).

Bobby: He can make a scene work against anyone. Even a CGI albino gorilla monster. (Yes, I saw Rampage. In the theater. Opening night. And loved it.)

Andrea: He's rumored to be playing Jack Burton in a Big Trouble in Little China remake and I think he's the ONLY person my husband would not have a problem with stepping into Kurt Russell's tank top and jeans.

Bobby: He'd be perfect. Of course.

Andrea: Of course. He's always perfect. But actually, do you know what I think I love most about him? How open he's been about his "imperfections." He's been so forthcoming about his struggle with depression. It's such an important thing to put out there because so many people feel like there's something wrong with them if they're depressed. But if someone like The Rock can struggle with depression, it makes people feel less alone, I think. And that's so important.

Got tons of responses to this. Thank you. We all go thru the sludge/shit and depression never discriminates. Took me a long time to realize it but the key is to not be afraid to open up. Especially us dudes have a tendency to keep it in. You’re not alone

He said in an interview once that he has had times in his life when he was "crying constantly" and he also talked about his mother's suicide attempt, which is another part of mental illness that has such a stigma attached. I just think — this is the kind of thing that makes someone a real role model, you know? Picking yourself up and battling those demons and then not being afraid to talk about them.

Bobby: Absolutely. While so many celebrities try to stay guarded or separate who they are on- and off-screen, he seems really committed to being his authentic self, (very few) flaws and all.

Andrea: Yep. I think that's the main reason why he is so universally loved. He's a huge star, but he just seems so authentic and kind. You can't say that about many famous people.

Bobby: Not just as a celebrity, but also as someone coming from the macho worlds of football and pro wrestling, he's not afraid to be goofy or vulnerable.

Andrea: Yes, exactly. Coming from a world that can be so full of toxic masculinity, he does not seem to be that way at all. It's refreshing and also important.

Andrea: So we're both agreed — The Rock is arguably the greatest celebrity alive right now?

Bobby: I'm convinced. I can't wait for him to EGOT. Give him a Nobel Peace Prize while you're at it.