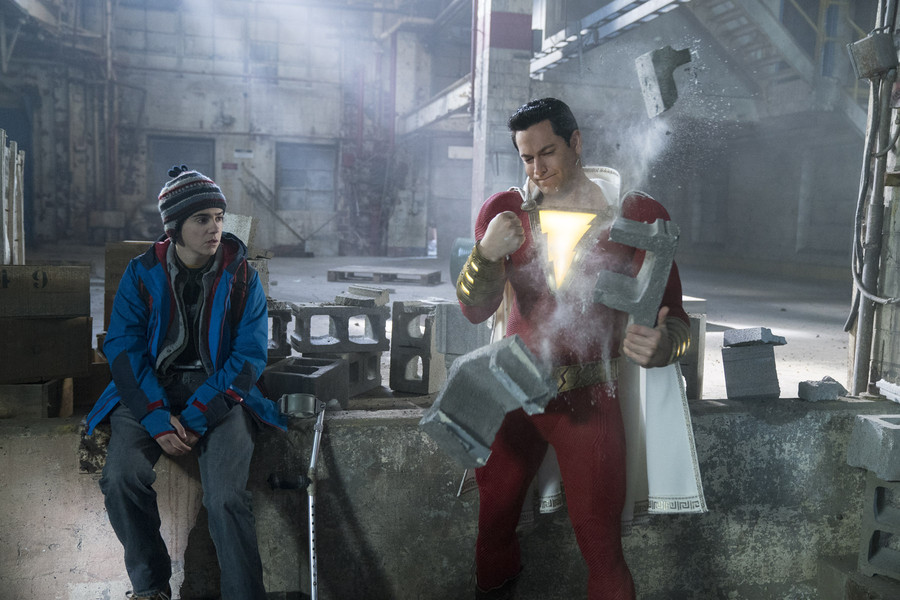 Does the Name SHAZAM! Sound Familiar to You? Here’s Why.

Short version: it’s an acronym of Solomon, Hercules, Atlas, Zeus, Achilles, and Mercury. SHAZAM! is the incantation that turns Billy Batson into his super-powered alter-ego, also named SHAZAM! But if you haven’t seen the movie SHAZAM! yet (and reviewers agree you should), the name might still might ring a bell.

So where have you heard it before? Here are the most likely culprits.

Like abracadabra or presto!, the word has become a magic-show staple—the perfect phrase for the big reveal. But the term really was invented by the comics SHAZAM! is based on. In 1940, artist-writer duo C.C. Beck and Bill Parker created the SHAZAM! acronym, and the character, in Whiz Comics #2. Since then, the term has been adopted and widely used outside the world of comics. For instance…

Fans of classic TV might remember this one. On The Andy Griffith Show, Gomer Pyle was often heard to exclaim “SHAZAM!” alongside his other favorite catchphrases “Golly!” and “surprise, surprise, surprise.” Gomer (or the show's writers) must have been a fan of the comics.

Shazam (no exclamation point) is a popular smartphone app that can identify music based on a short sample captured on your device’s microphone. It can also pinpoint movies, TV, or ads using audio—almost like magic. If you’ve heard “Shazam” used as a verb (i.e. just Shazam it), it was most likely referring to this program. But other than the name, the app has no connection to the character. And if you’re still confused...

SHAZAM!, a super hero film based on the character of the same name, was released in 2019. To this date, it is the only feature film with that title. Seriously.

All right. Here’s what you may be (mis)remembering. In 1996, Shaquille O’Neal starred as the title character in a family comedy titled Kazaam, about a genie that grants three wishes to a kid named Max, played by Francis Capra. Hijinks ensue, and Max learns the true meaning of “be careful what you wish for.” The film includes an original rap song performed by Shaq.

Fine, but wasn’t there a different movie about a genie called Shazam?

No. Beyond a doubt, Kazaam is the 90s genie comedy you seek. However, plenty of people misremember the title of the film as "Shazam," hence the confusion. Additionally, these same people often claim that the nonexistent 90s movie SHAZAM! starred comedian Sinbad—a second genie-based family film, wholly distinct from Shaq's star-making turn.

Confused? It gets worse. Some of those who remember the faux-Shazam have taken their assertion a few steps further, insisting that...

Many SHAZAM! truthers claim that there really is a 90s movie called SHAZAM! that stars Sinbad. It just exists in a different universe. Like a glitch in The Matrix (1999), a “corrupted” memory of this film signals that reality has shifted, and the memory holder retains information from a different, earlier reality. They call this “the Mandela effect.”

(It’s not a sign we’re living in a parallel universe.)

The Mandela effect is so named because there are folks who swear that Nelson Mandela’s state funeral was televised in the mid-90s. Therefore, they are accessing memories of a parallel universe where Mandela died in 1994 instead of 2013. Also, in this universe (or maybe another one), Kazaam was called SHAZAM!, and the Berenstain Bears spelled their name Berenstein with an “e.”

Most Mandela effect believers were young children in the 90s. If they saw a big, important funeral on TV, it could have been for Richard Nixon, in 1994, or Princess Diana, in 1997—but they’ll never admit it. But if you’re not under the influence of the Mandela effect...

SHAZAM! is a 2019 super hero film starring Zachary Levi. It's the only one of its kind, it's really good, and it's in theaters now.