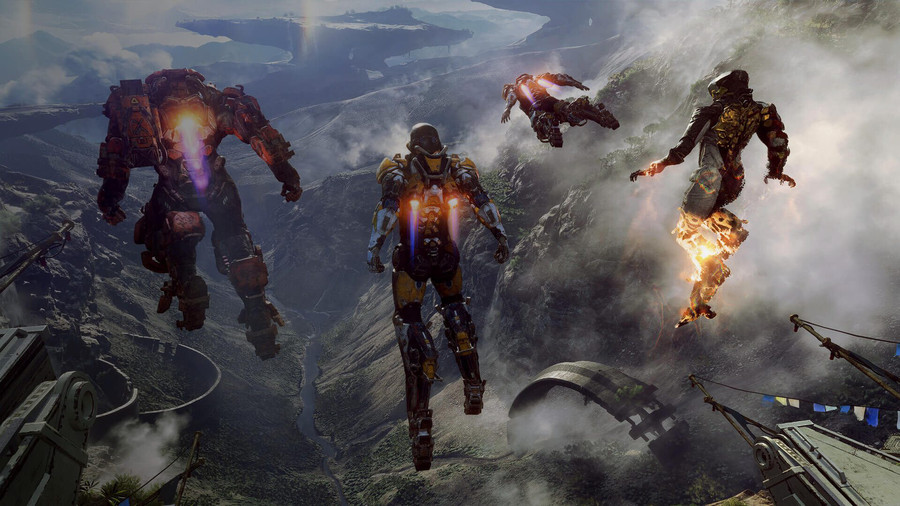 It’s no secret that EA has been in the news for all the wrong reasons. From the microtransactions and loot box controversies to Mass Effect: Andromeda's troubled launch, if the renowned publisher was going to turn over a new leaf, their press conference at the 2018 Electronic Entertainment Expo (E3) needed to deliver — and they did just that.
Here are just a few of our favorite moments from E3 2018's EA press conference.

Battlefield 5 will bring the word "epic" to new heights

Mark our words, hiding from a tank in Battlefield V will be the next “Here’s, Johnny!”
The series has always been known for detailed, destructible environments, but there was always a place to hide when the situation called for it. Well, if you ever had the pleasure of being chased by a tank, and thought that house, that seems like a good place to regroup. No longer. Tanks can now cut through houses like tissue paper.
And yet, paper beats rock in rock-paper-scissors every time… I digress…

This neighborhood's homeowners association will not be pleased.
A few other honorable mentions: no loot boxes, battle royale mode is coming soon, and customizable characters. A few eagle eyes and accuracy enthusiasts were quick to point out that customizable characters would inject people who could not have possibly participated in the war. But EA was quick to point out, this is “our” interpretation of World War 2. Fun > accuracy. I dig it.
Battlefield V roars through your house this October, and you can watch the full trailer here.

As of this writing, EA is giving everyone a free FIFA 18 trial because...World Cup

You read that right. For the PlayStation 4, Xbox One and PC. So go get it!

As for FIFA 19, the community had their own set of demands, and the developers listened: the UEFA Champions League is finally coming to the FIFA series. As the presenters on stage pointed out, there are only two trophies that matter to any soccer player around the world. The UEFA trophy and the World Cup trophy. And now, they're together at last on FIFA 19.

You can scream goal for as loud and as long as you want when FIFA 19 releases in September.

Many pundits across a variety of industries have claimed that the days of physical media are numbered. Some even predicted that the next video game console generation may be our last, and that may be true. Digital sales are on the rise, the ability to play games via various digital services is already alive and well, and the idea of waiting in line for hours at midnight for a hard copy release has slowly eroded away. Now, savvy gamers can simply wake up to an installation on their game console of choice or by opening their front door and taking in a package.
What Wilson was clear to point out was that this isn’t happening today, tomorrow, or for that matter soon. But EA is steadfastly preparing for the day when the consumer wants it to be that way. You can learn more about EA’s service below.

The only thing that usually comes from the crowd are people crying with joy, heckling or boos. But CEO Vince Zampella from Respawn Entertainment brought knowledge. The knowledge that if you didn’t know that the makers of Titanfall were working on a Star Wars game, well, they are. It’s called Star Wars: Jedi Fallen Order, it takes place between Star Wars Episodes 3 and 4, and that it’s gonna be all the rage when it comes out in Holiday 2019. He kept his lips sealed about much else, but did let us know it will be dark, and that this was not a great time to be a Jedi. Our hope? A 300 or Seven Samurai Jedi tale.

We’re not quite sure what we’re looking at, but we love Sea of Solitude

One of the creators from Jo-Mei Games took the stage to introduce Sea of Solitude, made possible by EA’s Originals program. Cornelia Geppert, writer and creative director of the upcoming title, spoke at length about human emotion and what happens when people get lonely. This was a pretty interesting juxtaposition because behind her was an image of a boat on the water surrounded by what looked like a sea dragon of sorts.
Regardless, when the trailer dropped, all those feelings we had about watching the original trailer for The Last Guardian all those years ago came flooding back. This is definitely going to be one to watch and we can’t wait to get our hands on it.
Expect to set sail when Sea of Solitude releases in 2019.

And then, the game everyone had been waiting a whole year to know more about landed in a three-point stance: Anthem

Anthem has been called many things. A sci-fi opera. A Destiny killer. But most of all, the game this generation of consoles has desperately been waiting for. And EA delivered, and then some.
They dove into the lore, the javelins (the cool armor suits your pilot keeps in their…cool armor suit closet) — but what really made us scream “pics or it didn’t happen” was when they spoke about the weather. If I’m playing a game in New York, and I’ve got online friends playing anywhere else in the world, the weather in all of our games is in sync. And not just because we’re playing together, but because everyone experiences worldwide events simultaneously.
The idea being that they want everyone to be able to go to school, work, or the coffee shop the next day and say, hey, what were you doing when we realized that was no moon, it was a space station? Pretty cool. We have questions, but we’ll save them for a follow-up piece. In the meantime, February 22, 2019, can’t come soon enough.
And there you have it. Our favorite moments from the EA press conference. EA crushed it.
We’ll be here all week.

Advertisement
Brandan Jones is the embodiment of "he who laughs first knows who did it." When he's not breaking down movies, leaning back with a video game, or developing his next project, you'll most likely find him engaged in a Seinfeldian debate about the practical realities of the philosophy of Batman.