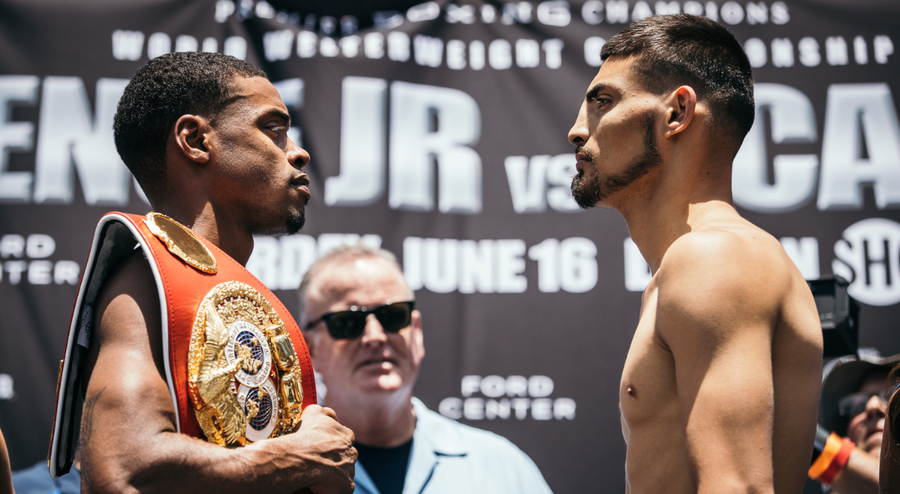 A native of the lone star state, IBF welterweight champ Errol Spence, Jr., may not be a lone star in the boxing firmament, but he may soon be its brightest. The undefeated 28-year old puts his IBF "strap" on the line Saturday night in an intriguing matchup against rangy Mexican slugger Carlos Ocampo. Ocampo has never fought on American soil, and is something of an unknown commodity in the US. Yet the 22-year old is the IBF's third-ranked welterweight contender. He'll get the chance of a lifetime on Saturday in the Ford Center at The Star in Frisco, Texas, Spence's home turf.

The Texas-bred Spence isn't lacking in confidence heading into Saturday's showdown, nonchalantly noting that he plans, "to end the night early" at a recent press appearance. He is presently ranked number seven pound-for-pound best fighter in boxing according to The Ring Magazine. His 23-0 record features 20 KOs, including stoppages in his last 10 fights. Recent wins include a TKO of tough Chris Algieri, a late stoppage of Englishman Kell Brook to win the title, and a crushing defeat of former champion Lamont Peterson. Spence is considered by many to be a rare blend of "technical expertise and crippling power" with a penchant for delivering one thumping body shot after another into the sides of grimacing opponents. And, as a southpaw boxer, Spence presents an unorthodox test to right-handers like Ocampo.

Check out some highlights from Spence's recent wins, including the stoppage against former two-division champion Peterson:

Despite his obvious skills, Spence faces stiff competition in the undefeated but untested challenger Ocampo (22-0, 13 KOs), who is considered one of Mexico's best welterweight prospects at just 22-years-of-age. Ocampo most recently TKOed Dario Ferman in Chihuahua, Mexico in November. A win on Saturday in his first stateside appearance would launch Ocampo into the upper echelon of young Mexican talents, a rich field of fighters currently led by Canelo Alvarez.

Even with Ocampo being a relatively unknown commodity, Spence is still a heavy favorite. The IBF titleholder sees himself comfortably defeating Ocampo and eventually unifying the belts in the one of boxing's most talent-rich divisions. To do it, he would likely have to conquer WBA champ Keith Thurman, divisional newcomer and WBO champion Terrance Crawford, and either Danny Garcia or Shawn Porter, who will battle it out for the WBC strap this fall. If Spence can beat Ocampo and sell out the 12,000-seat Ford Center at The Star in Frisco, Texas, this Saturday, he may be on his way to PPV status and lucrative paydays against his fellow titleholders. Catch him while you can before his fights assume a higher price point.