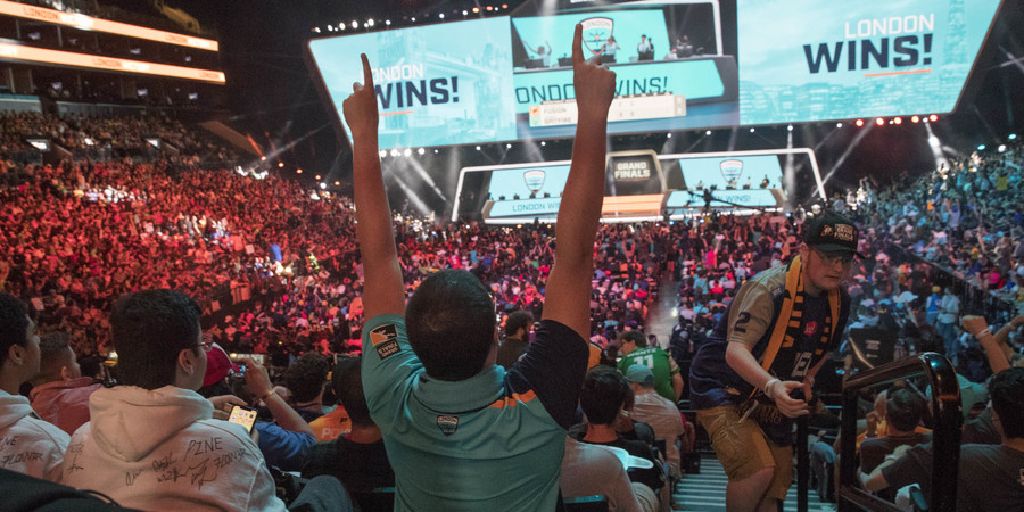 NEW YORK (AP) — They stood, they cheered, they booed and they boozed. Turns out, esports fans in New York aren’t much different from their traditional sports counterparts.

Packing a nearly 2,000-seat venue across the street from Madison Square Garden, those supporters validated the theory behind the Overwatch League’s ambitious global vision.

“This event is everything we could have hoped for,” said Jon Spector, vice president of the competitive video game circuit.

The OWL opened its third season last weekend with matches hosted by franchises in New York and Dallas, and everything about the sold-out shows looked like a payoff on its wager that a world-wide, city-based structure could propel it to the top of a blossoming industry.

Those festivities were the first of 52 scheduled events on the home-and-away calendar that will bring competitions to 20 arenas spanning Europe, North America and Asia. No professional league — esports or otherwise — has taken on such an arduous regular-season schedule.

While many fans are concerned about the welfare of players — some still teenagers — the league believes it has taken appropriate actions to prevent burnout for the stars of its 6 vs. 6, first-person shooter computer game, who earn over $100,000 per season on average.

Of course, the OWL still readily admits this globe-trotting adventure is an ongoing experiment.

At the Hammerstein Ballroom in Midtown Manhattan, the endeavor's upside was apparent. Fans spent well over $100 for two-day passes and came out in force for doubleheader matches Saturday and Sunday. Four teams — New York, Boston, London and Paris — took turns squaring off, and fans had the venue nearly filled even for the undercards.

It felt like a typical, rowdy sports crowd — decked out in team gear from the on-site merchandise stand, waiting in line for pizza and beer during lulls in the action, and ruthlessly jeering the rival Boston Uprising at every opportunity.

“The audience has always been here,” said Farzam Kamel, co-founder and president of Andbox, which manages the New York Excelsior.

Blizzard Entertainment hoped exactly that when it sought to give the global esports phenomenon a geographic twist. While other esports, like the decade-old League of Legends pro circuit, have thrived with rootless franchises, Blizzard-backed OWL thinks the future of the industry involves bringing live events to invested parties throughout the year.

After hosting nearly all its matches in seasons 1 and 2 at a facility near Los Angeles, Blizzard is starting its city-based experiment in earnest this year. Each franchise is set to host between two and five weekends of competition during a 26-week regular season that runs through early August.

It's coming just in time for a league lagging behind competitors in total viewers. OWL's Grand Finals averaged 1.12 million viewers globally in 2019, far behind the 21.8 million average audience for League of Legends World Championship, according to Nielsen. By comparison, Game 7 of last year’s World Series averaged 23.2 million viewers in the U.S., and the Super Bowl drew 112.7 million.

OWL fans have expressed concern recently about signs the league's momentum is slowing, including an exodus by much of its popular on-air talent. Most troubling was misguided speculation that travel plans might require players to log nearly twice as many miles as traditional American sports athletes, worrying fans about the plan's viability.

The league strongly disputed those calculations and believes its been strategic enough about its schedule to keep players fresh.

Rather than forcing teams to ping-pong around the globe, OWL stacked the schedules by territory. For instance, the Paris Eternal will open with nearly two months on the U.S. East Coast, save for a weekend in Houston. They'll split the middle of the season mostly in Europe, then close out with a four-week trip through China. Those legs will be peppered with bye weeks, especially before and after the longest trips.

“Travel is inherently a part of a global league like the one we've designed,” Commissioner Pete Vlastelica said. “We've done a lot of work to make sure the burden of that travel is kept to an absolute minimum.”

The total mileage isn't as extreme as fans feared. The league projects Paris' team to cover 52,000 miles, compared to approximately 40,000 miles per season for an NBA franchise. But it is more time on the road.

Paris had players report to team housing in New Jersey in mid-January, and it will use that as a base for the early part of the season. They'll get similar setups during swings through Europe and Asia.

“It reduces the travel time," Paris VP of Esports Derrick Truong said. "It allows us to be able to practice longer than other teams traveling from far away.”

The league had already lost players to burnout in previous seasons, when homesickness was an issue for its largely international player pool but travel weariness wasn't. Players expect to be tested this year.

“There are things like jet leg and traveling a lot; it’s physically hard," said TaeHoon “Fuze” Kim, a player for London, which is also starting the season in New Jersey. "But because traveling and experiencing other cities are all fun to me, I don’t really mind it.”

There has already been a major complicating wrinkle, too. Early season matches in the OWL's four Chinese cities had to be postponed due to the coronavirus outbreak. Makeup dates and locations have not yet been announced.

Blizzard is concurrently launching a similar global schedule with its first-year Call of Duty League, and it anticipates learning quite a bit between the two circuits.

If it does work, it could have a rippling influence well beyond esports. North America's big four professional sports leagues have all hosted games abroad in recent years, and full-time expansion to Europe or Asia would surely be appealing to many owners and international fans. If the gamers can show it's possible, leagues like the NFL, NBA and others might borrow from their playbook as they follow suit.

For all this jet setting, OWL certainly wouldn't mind being remembered for trendsetting.

“I've been saying this is sort of the starting line for us,” Vlastelica said. “This is the year we're going to do the thing that we've designed.”

This article was written by JAKE SEINER from The Associated Press and was legally licensed through the NewsCred publisher network. Please direct all licensing questions to legal@newscred.com.