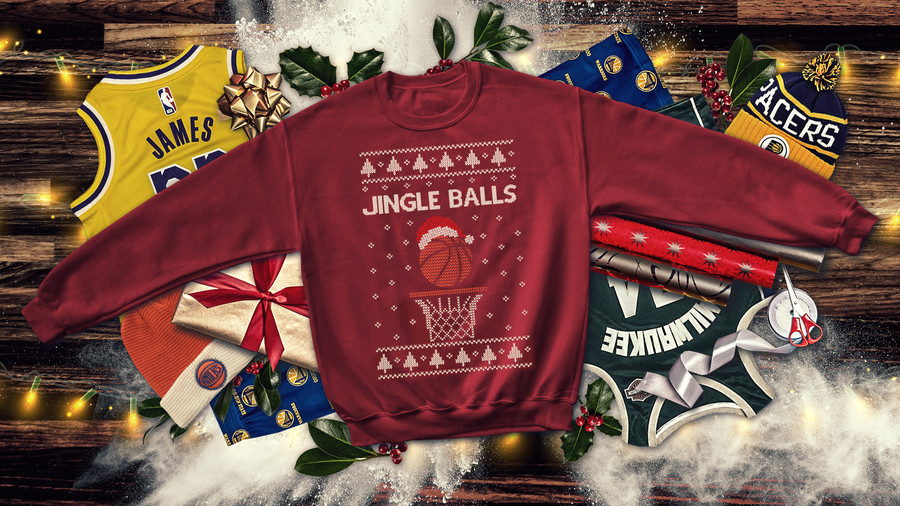 Over the past decade, the NBA has made many changes and innovations to its jerseys. They updated colors, experimented with sleeves for a few years, and switched partners mid-decade from Adidas to Nike.

Rarely have their experimentations been more noticeable than on Christmas Day. The holiday has become the league’s primary showcase day, as well as the unofficial “start” to the season in the minds of many fans. Since the league is promoting its most high-profile matchups on national television, it strives to make the uniforms for those games stand out. Some of these efforts have been more successful than others.

Here is a look back at some of the most memorable -- for better or worse -- NBA Christmas jersey designs from the 2010s.

2012 Christmas jerseys were fire around the board pic.twitter.com/mFACGkHJ7q

For the first Christmas jerseys of the decade, the NBA went full monochrome, with striking results. The Miami Heat’s jerseys, in particular, played off the all-black and all-white alternates they employed during the Big 3 era with LeBron James, Dwyane Wade and Chris Bosh. The entire endeavor had a cool and classic look that popped on the television screen.

The 2013 Christmas jerseys are the best of all time. pic.twitter.com/3urLuZV0pX

To many, the most regrettable era of NBA jerseys was the league’s brief dalliance with sleeves. With the NBA’s global profile on the rise, it made sense (sort of) to capitalize on the popularity of soccer jerseys with international fans.

It was a noble mission, but the execution missed the mark. Basketball players wearing sleeves just looked wrong, and many players complained that the extra fabric hampered their shooting routines. The jerseys did succeed on one front: they sold well with fans, but were too unpopular within the league.

To add insult to injury, the controversial 2013 Christmas jerseys eschewed team names on the front, opting instead for oversized logos that made them resemble hockey jerseys. When Nike took over the league’s jersey contract in 2017, they mercifully did away with this concept.

Want to get to know your favorite @NBA player on a first name basis? Check out the 2014 Christmas Day Jerseys! pic.twitter.com/5ig9DGmeiY

The NBA opted for minimalism on Christmas Day in 2014. On the front, they went with a small team logo with no wording. On the back, they changed it up as well, with first-name nameplates below the numbers rather than above. The design was sharp, but the first names only worked in a few cases. Most fans already referred to LeBron James and Kobe Bryant by their first names, so those ones were a natural fit. A Kevin Durant jersey that just read “Kevin” was less successful.

The league decided to get festive in 2015, with a fancy script font that was eye-catching while remaining tasteful. It successfully straddled the line between timelessness and fashion, and was so successful that they repeated the concept in 2016.

Unfortunately, 2016 was the last year the NBA featured a dedicated Christmas uniform. It’s a tradition they should return to. But jerseys aren’t the only way to flash a little holiday spirit on the hardwood.

The Greatest Christmas Sneaker of All Time

Plenty of NBA players have worn festive sneakers to mark the holiday. But none kicked up more Christmas glee than Nike’s Kobe 6 “Grinch” colorway. They looked sharp on the court and honored the Black Mamba’s polarizing persona with a nod to the greatest Christmas villain of all time.

Here’s hoping for more festive fashion in and around the 2019 Christmas Day games—and more holiday colorways in the decade to come. Catch all the action, including crosstown showdown Clippers vs. Lakers and defending-champ matchup Celtics vs. Raptors, with DIRECTV.