If you don’t know who Arya Stark is by now, don’t bother turning to your maester for help: she could be anyone! (And you’re probably already dead.) This highborn-girl-turned-ruthless-assassin is a Game of Thrones fan favorite, and for good reason. Over seven seasons of training, planning, and meticulous list-making, Maisie Williams has portrayed everything from a boy to No One to a Frey, and now she's officially Arya Stark again. With the final season of GoT nearly upon us, let's take a look back at Arya's journey, and what makes A Girl one of our faves.

Born the youngest daughter of Ned and Catelyn Stark, Arya was ever the wild child. In Stark contrast (heh) to her sister Sansa, a paragon of lady-like decorum, Arya would rather shoot arrows and swing swords than do needlework, and the two sisters often butted heads in the show's first season. Even their direwolves are diametrically opposed: Arya names hers Nymeria, after the legendary princess who founded the modern kingdom of Dorne, while Sansa calls hers...Lady. (More on Nymeria later.) Their natural animosity gets even icier when the Stark girls have their first run-in with death. On the road to King’s Landing with their father, Sandor "The Hound" Clegane cuts down Arya’s friend Mycah after some swordplay gone awry, and Arya ends up blaming Sansa for it. Classic sister drama.

When they arrive at King’s Landing, Arya’s still not ready to play the dutiful lady. She reluctantly attends dancing lessons but is thrilled to discover that “water dancing” is actually swordplay, and her teacher, Syrio Forel, knows more than just a little soft-shoe. Syrio also teaches Arya her first lesson on mortality: “What do we say to the god of Death?" he asks. "Not today.” When Ser Meryn Trant and the Lannister guards come to take Arya, Syrio fends them off with nothing but a broken sparring sword, allowing Arya just enough time to escape. 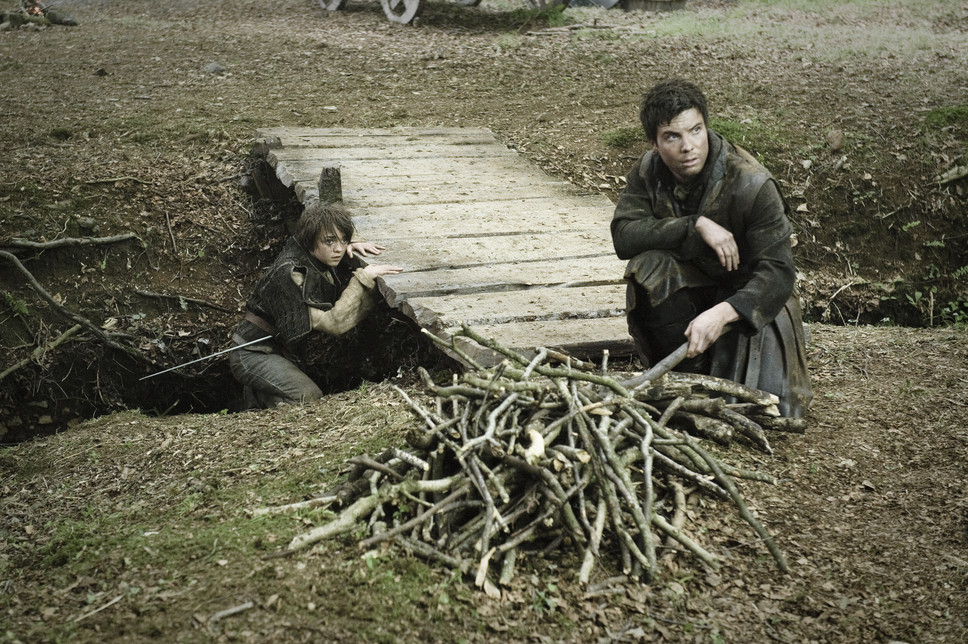 Arya is sparred from directly witnessing her father's beheading—yet another encounter with Death—and her rescuer will also lead her to the next leg of her journey. Yoren, on his way to The Wall with a group of Night's Watch recruits, discovers her in the crowd and smuggles her out of the city disguised as a boy. Later, he gives Arya the idea for her death list, which she recites like a prayer every night: Cersei. Joffrey. The Hound. (And many more to come.) Arya decides to organize her whole life around it. Call it "The Life-Changing Magic of Killing Your Enemies." Who among us doesn't want the Lannisters to die just a little?

Lannister soldiers ambush the group, and in the ensuing melee, Arya helps Jaqen escape. The soldiers take Arya and her friends to Harrenhal, where she's surprised to see Jaqen, now dressed as a Lannister soldier. He tells Arya that in return for saving his life, he will kill any three people she chooses. Who to kill, who to kill? Desperate to escape Harrenhal, she gives Jaqen his own name (tricky!) and agrees to un-name him only in exchange for his help getting out of the castle. Before they part, Jaqen gives Arya a special coin and phrase (“valar morghulis”) before he returns to Braavos.

Arya, Gendry, and Hot Pie aren’t free for long before they’re overtaken by The Brotherhood Without Banners, a Robin Hood-esque group of outlaws who claim to protect the weak, though they’re not averse to a little human trafficking when the price is right. The Red Priestess Melisandre finds them, immediately asks to buy Gendry (since, you know, King's blood), saying “The Lord of Light commands me to use him in a sex magic ritual. Here's some gold.” Just like that, Melisandre, along with Brotherhood leaders Beric Dondarrion and Thoros of Myr, are on the list. 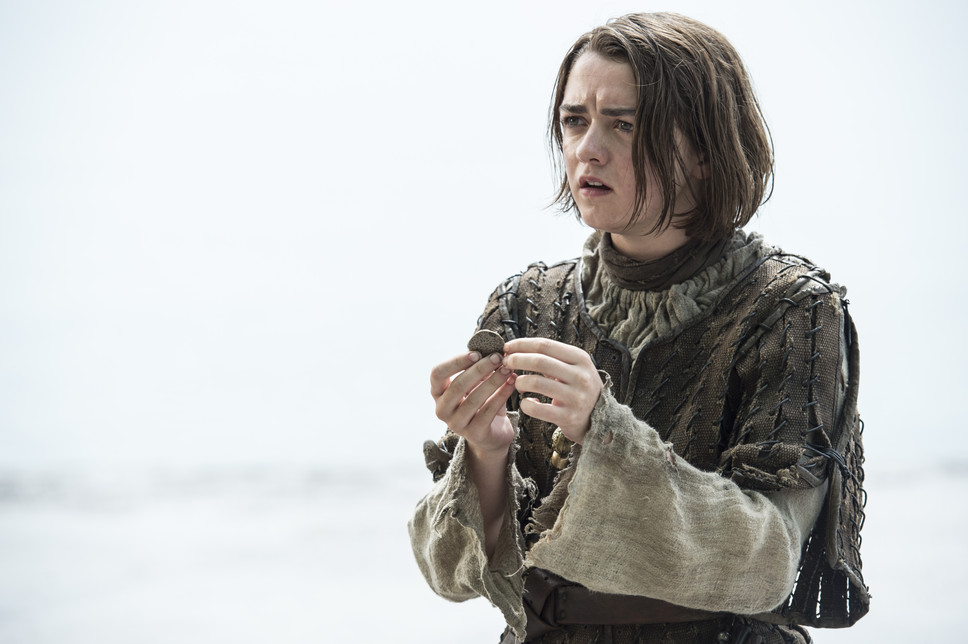 The Hound shows up and starts sniffing around the Brotherhood. Seeing an opportunity to cross one of the names off her list, Arya lobbies Beric Dondarrion to punish Clegane for his crimes. The Hound defeats Beric (don't worry - he's resurrected, like, right away) in a trial by combat and takes Arya hostage, intending to sell her back to her family.

Their ensuing journey across Westeros is part Western, part buddy comedy, and all bloody. While most of us have never trekked across a medieval landscape with a disfigured killing machine, we find joy in Sandor and Arya's begrudging respect and developing friendship. They arrive in the Riverlands just in time to witness more of Arya's friends and family being slaughtered at the Red Wedding.

At this point, it's fair to wonder: how much can a girl take? Arya's ability to survive in the bleakest emotional and physical conditions is inspiring (admit it, you'd jump into Blackwater Bay after a couple days without your phone), but at what cost? 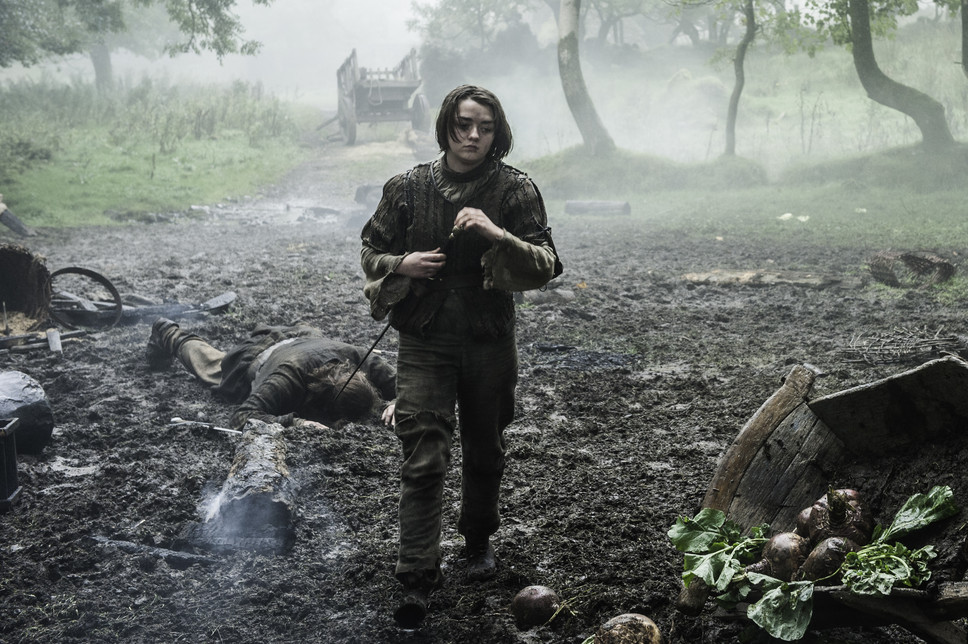 As it turns out, seeing all that carnage before your 13th name day can do some things to your psyche. And when they arrive at the Vale to find that Arya's aunt Lysa has just died, we experience our own bleak catharsis in the form of Arya's maniacal laughter. After Brienne of Tarth mortally wounds the Hound in single combat, he begs Arya to put him out of his misery. Now's your chance, girl—cross a name off that list! But Arya just walks away. Cold. Blooded.

A Second Chance at Death

If you've been keeping track, you've noticed that Arya has seen some things, man. But when she sails the Narrow Sea to Braavos and takes her old pal Jaqen up on his offer to train with the Faceless Men, she...sees some boring things. Washing bodies, scrubbing floors—what happened to kicking ass and taking faces? We can all relate to her teenage impatience. So we pump our fists when she goes rogue to cross Ser Meryn Trant off her list. Game of Thrones is probably the only show that gets you to root for a child killing machine, but even the most diehard Arya fan has to feel a little troubled when Arya gets a little too into giving Trant the Gift of the Many-Faced God. Honestly, she deserves to lose her eyesight for a little while after that. 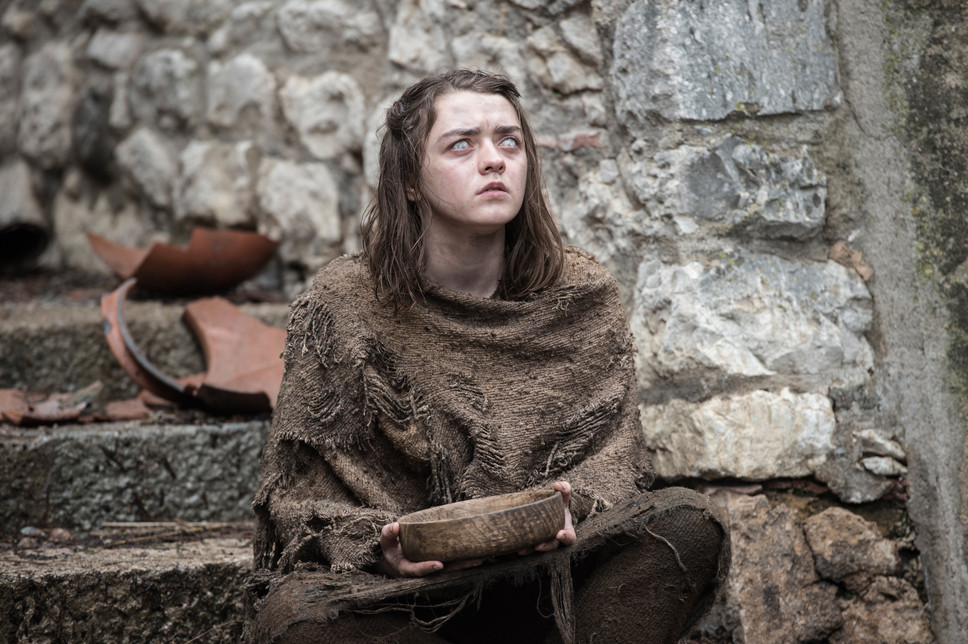 Over two seasons training in the House of Black and White, Arya comes to wonder: is the assassin's life right for me? She initially jumps at the chance to make good with Jaqen by taking on a new killing assignment, but when she meets the target—Lady Crane, a kind, compassionate, and talented actress—she decides to pass her own judgement. As soon as Arya saves Lady Crane’s life, her own is forfeit. Now Arya's on the run again, with the T-1000-esque Waif in hot pursuit. Good thing Arya learned to flight blind—and that she never totally discarded her Stark identity. Armed with her trusty sword Needle, she defeats the Waif in total darkness. When Jaqen discovers the Waif’s freshly peeled face decorating the House of Black and White, he tells Arya she has finally become No One. But A Girl is not having it. “A Girl is Arya Stark of Winterfell," she says. "And I'm going home." 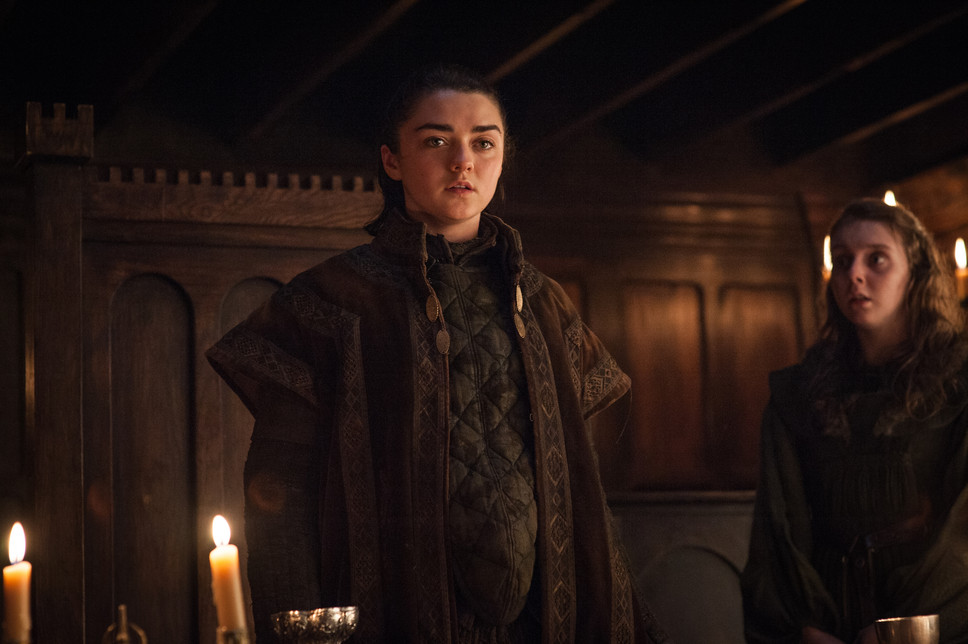 There And Back Again

Of course, there's still that list to take care of. En route to Winterfell, Arya makes a quick pitstop to casually murder Walder Frey and his entire line of succession. Hey Sansa, I'm picking up a gallon of milk and the faces of a few enemies—you need anything? The Freys definitely deserved it, but Arya's lifeless eyes don't let us take much satisfaction in the act. Are you okay, girl?

She also happens upon her direwolf Nymeria, who Arya jettisoned back in season one. Despite years apart, the two she-wolves recognize each other. But so much has changed since they were both young pups. Arya wants Nymeria to come back to Winterfell as her companion once again. But they've each found their own life. As series creator D.B. Weiss tells it, "Arya’s not domesticated, and it makes total sense her wolf wouldn’t be either. Once the wolf walks away, at first she’s heartbroken to have come this close. Then she realizes the wolf is doing exactly what she would do if she were that wolf.”

Arya eventually arrives home to an understandably tense reunion with Sansa. They're relieved to see each other, but neither one is sure who the other is anymore. When Arya spars with Brienne, Sansa's understandably ruffled. Her little sister is a killing machine? That's...new. Sansa, for her part, still has to answer for her perceived betrayal of House Stark—forced or not—while she was with the Lannisters. Meanwhile, Bran's something called the Three-Eyed Raven now, and it seems like more than a goth phase.

Littlefinger, eager to manipulate the Starks as always, stirs their suspicions of one another to the point that it seems like the family reunion may end in bloodshed. C'mon Petyr, Arya's dealt with worse than you. The Starks see through his machinations, and Arya slits Baelish's throat before he can talk his way out of it. The pack survives. 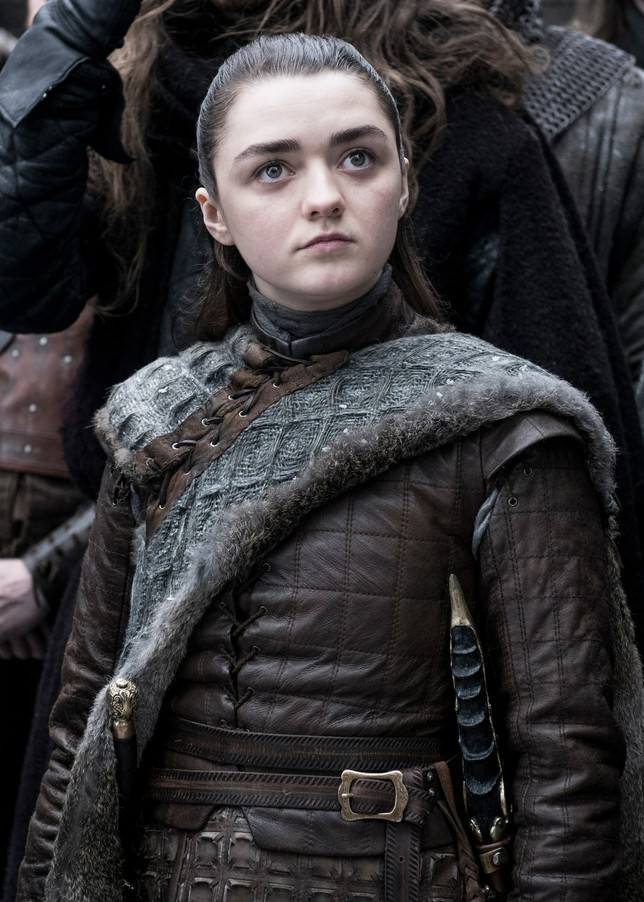 She's reunited with her siblings, and most of the names have been crossed off her list. Where does Arya go from here? Will she pursue revenge against Beric, Sandor, and Cersei, or will she discover that the real enemies are coming, and they're already dead? Either way, we can count on more of the snark and swordplay that make Arya Stark so fun to root for. Yes, her killing sprees remain just a bit problematic, but we hope she finds some peace by the time GoT's final credits roll. If anyone deserves to find her happy place, it's Arya.