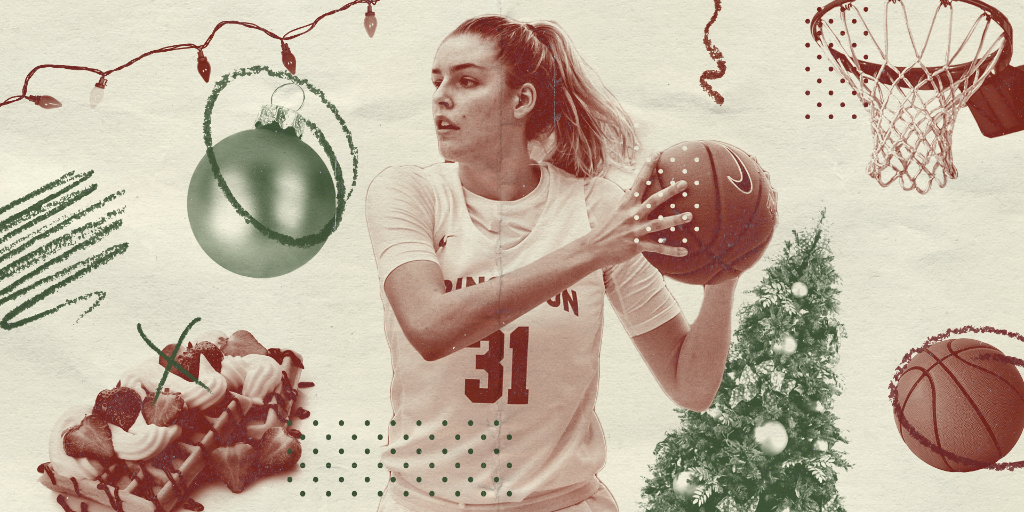 She’s hundreds of miles from her childhood home in Bethesda, Maryland. But no matter where she is, Princeton senior and basketball wunderkind Bella Alarie can close her eyes and recall the familiar smell of Christmas.

“Yes, oh my god, the waffles,” Alarie said, envisioning her family's signature Christmas morning meal. “Ever since my first Christmas that I can remember, we've had waffles, family, all the toppings, chocolate chips, whipped cream. And we always get to open one present before and then we eat the waffles. I'm always rushing through so I can open my present.”

She’s likely to slow down this year—not because those waffles are any less delicious, but because Alarie and her family realize that it's all about to change, and are taking a bit more time to savor it.

For women who play professional basketball, the grind is year-round: WNBA summers, and for most players, overseas winters. By next Christmas, Bella Alarie is likely to be deep into her second professional season of the calendar year, thousands of miles from home.

Alarie can do things on a basketball court few others can. At 6'5”, she's the height of a traditional WNBA center, but she’s a functional hybrid, shooting the ball with a feathery touch from outside, while capable of elite scoring and shot-blocking around the rim.

Her game brings to mind two of the game’s modern legends: Breanna Stewart and Elena Delle Donne. For those keeping score at home, those are the last two league MVPs and leaders of the last two WNBA champions.

So every time she takes the floor, talent evaluators around the league take notice. And Alarie, too, understands the serendipitous way her basketball development and natural gifts have merged with the way the league has come to value immensely talented and rare players like her. “I am fortunate that I look like players like Delle Donne and Breanna Stewart who are tall and a little lanky but can shoot from the outside and create and pass,” Alarie said. “So I think that was just something that obviously I'm born with and fortunate. But I definitely did focus on guard skills and being as versatile as possible, and as my career has gone on and I get doubled more and more, I really have to work on assisting and looking for outside shooters. I think that'll go a long way in the future of my career.”

Her father, Mark, played a role in Bella's development beyond waffles (though, to be clear, the entire family praises his handiwork in the kitchen). After starring at Duke, he played five seasons in the NBA with the Denver Nuggets and Washington Bullets. And from age eight on, Mark was Bella's youth coach, distilling a career's worth of lessons, both of what worked and what he wished he could have done himself, into her training. Combined with the family’s extensive travel—Bella's visited more than 30 countries—it gave the younger Alarie an early education in the realities of the women’s professional game.

Not that going pro was a certainty. In Mark’s mind, Bella hearing her name called early into next spring’s WNBA Draft was less a plan than a best-case scenario when this all began.

“I think that's more of a hope and a prayer, a dream,” Mark said. “You play basketball because you love the game. You can't wait to play your games this coming weekend...I don't know how it's all going to be, I don't know if she's going to be athletic. I don't know any of these things as her 10 year old youth coach.”

But the Alaries soon began to sense something different in Bella. Her mother, Justice Department lawyer Rene Augustine, remembers one afternoon at home that told her Bella might be traveling a rare path.

“She was maybe 11 or 12 years old, and she'd gone to a basketball camp all day long, from eight in the morning until 4:00 p.m.,” Augustine recalled. “And I picked her up and we came home and she had one of these summer night leagues that she was playing in. So she needed to leave in about an hour to go to the night league games. And, during that time she went in the backyard and shot baskets. And I thought 'Okay, this is somebody who really, really loves this.'”

But at that age, Alarie’s future success wasn’t a given. A late growth spurt, and a thinner frame, meant many recruiting services, coaches, and schools—including Mark's alma mater—ignored Bella. It’s been a catastrophic mistake for many programs, and a boon to Princeton, a regular in the NCAA Tournament with Alarie on board.

She needed advocates—and who better than mom, who recalls: “I think she was underestimated a little bit. And so I think she always has worked really hard to get better and to see different places where she can always improve. She's always learning and always growing and always very able to take constructive criticism well. That's a skill not everyone has.”

Many people who aren't Bella Alarie's mother are willing to say, without reservation or fear of bias, that numerous colleges missed out on her. That's not going to happen again. But first, Alarie has a collegiate season left to play, goals to reach as someone who has dominated like no one else in the history of the Princeton women's program, an obvious analogue to what Bill Bradley did for then men’s. Even so, new Tigers coach Carla Berube and her staff are preparing Alarie for what's going to follow.

“What really matters now is Princeton basketball and achieving all the goals we've set for ourselves,” Bella said. “But the coaches have been amazing in helping me, especially in individual workouts, getting a lot of reps up for more professional settings, getting fadeaways and things like that where there'll be taller players, bigger players guarding me and making sure I'm getting the proper reps there.”

While the on-court education that began with her father well over a decade ago continues at an escalated pace, there are still a few boxes to check at her last Christmas back home for a while.

“Definitely the waffles, and then I'm going to, for sure, go get hot chocolate with my family,” Bella said. First relaxation, then the sprint, to the NCAA Tournament, the WNBA Draft, the working world.

No matter where Bella Alarie’s career takes her, don't expect her holiday traditions to disappear. The Alaries are no stranger to travel, and the family, including younger brothers Christian and Xander, will pack up and land wherever their collective hopes take Bella.

“We'll find a way to get a waffle iron wherever we need to go,” Augustine said. “And with the correct converter for the electric system.”