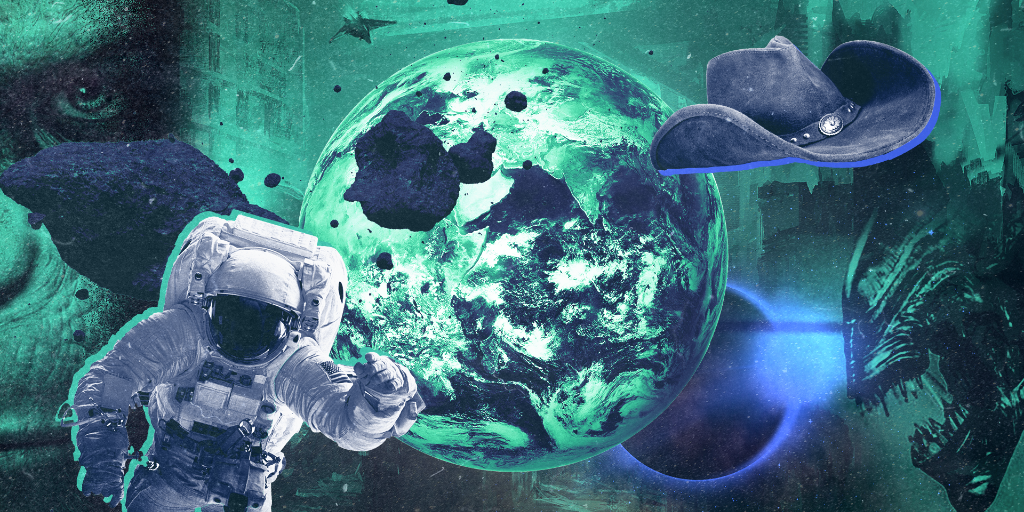 Ever imagined what life would be like if aliens came to earth? So have the filmmakers behind these 10 intergalactic stories, ready to blast off this Halloween and beyond:

British comedy duo Simon Pegg and Nick Frost bring us the first extraterrestrial encounter of this list: a sci-fi parody about “Paul” (voiced by Seth Rogen), a sarcastic, cigarette-smoking alien on the run from the FBI. When he meets the lads, they help him as he tries to escape back to his home planet — with plenty of laughs and misadventures along the way. Jason Bateman and Kristen Wiig amp up the funny in supporting roles, along with Sigourney Weaver and a cameo from Steven Spielberg himself.

Despite its comical title, Daniel Craig and Harrison Ford lend this creature feature a certain gravitas that keeps it rooted in serious scares and Western tropes without veering into campy territory. Olivia Wilde and Sam Rockwell co-star in this ambitious genre-bending blockbuster, which The Hollywood Reporter called a “solid success” in which “cowboys and aliens make beautiful, fun music together.”

Loosely based on the book by H.G. Wells and narrated by Morgan Freeman, Spielberg’s “War of the Worlds” follows the story of a divorced father trying to reunite his kids with their mom when interplanetary tripods begin to wreak havoc on Earth in order to harvest humanity. Tom Cruise plays dad to Dakota Fanning and Justin Chatwin while Tim Robbins is seen in a supporting role.

Directed by M. Night Shyamalan — a filmmaker with a penchant for the supernatural and macabre (“Unbreakable,” “Glass,” “Devil”) — 2002’s “Signs” centers on a grief-stricken family living on a remote farm after losing their wife and mother. Patriarch Mel Gibson and his brother, played by Joaquin Phoenix, must lead the way to safety when the suspicious appearance of crop circles heralds a violent alien attack. Abigail Breslin and Rory Culkin co-star as Gibson’s kids.

Tim Burton’s remake of the 1968 classic stars Mark Wahlberg as Captain Leo Davidson, an astronaut who finds himself crash-landed on a planet inhabited by humanoid talking apes who ride horses and keep people as slaves. Purchased by a chimp (Helena Bonham Carter) who opposes such treatment of human beings, Davidson ends up leading a rebellion while uncovering how the planet and its society came to be while planning his escape to Earth.

This original gem, another from the imaginative mind of Tim Burton, features an all-star ensemble cast with Jack Nicholson, Glenn Close, and Natalie Portman as the First Family along with Sarah Jessica Parker, Annette Bening, Pierce Brosnan, Jack Black, and many other familiar faces. As Martians descend on the United States of America, authorities, academics, and civilians alike come together to defeat the enemy invaders, but their kryptonite turns out to be something entirely unexpected -- and hilarious. A cult favorite, for sure.

Sigourney Weaver stars in one of the most memorable roles of her career as Officer Ripely in director Ridley Scott’s (“Prometheus,” “Blade Runner: The Final Cut”) 1979 classic. With a 98% rating from Rotten Tomatoes and a following that’s held fast for generations, The Guardian says that “after 40 years, this sci-fi horror masterpiece still feels lethally contemporary.” Catch up with the rest of the Ridley-verse (is that a thing?) with “Aliens,” “Alien 3,” Alien Resurrection,” as well as “Alien vs. Predator” and “Aliens vs. Predator: Requiem.”

Dennis Quaid and Louis Gossett Jr. star as human and alien soldiers in this dark sci-fi buddy dramedy. Victims of an interstellar war, the two crash on a deserted planet and try to hunt each other down before forming an unlikely friendship and, over years, even a familial bond. With stunning special effects and scenery for the time it was made, this fantasy film also features a touching sub-plot and moving moments atypical of the genre.

Written and directed by David Lynch (“Eraserhead,” “Twin Peaks: Fire Walk with Me”), “Dune” stars Kyle MacLachlan in his movie debut as a young nobleman battling to control the titular desert planet, which is also the sole source of a matter that makes space travel and psychic abilities possible. Despite bombing at the box office, the film has developed a devoted cult following over the years, and for fans, a supporting role from Patrick Stewart may be enough reason to keep rewatching. Watch out for the star-studded remake featuring Timothée Chamalet, Zendaya, Jason Momoa, Oscar Isaac, and other Hollywood talent, currently scheduled to come out sometime next year.

Ending on a high note, this 95% Certified Fresh film by Soviet director Andrei Tarkovsky is an unforgettable look at human existence through the lens of inner worlds lost in outer space. Hailed as a masterwork of science fiction and a moving examination of humanity, the movie follows a psychologist sent to space to investigate the mental deterioration of a group of long-gone cosmonauts orbiting the planet “Solaris.” As the doctor begins to realize the powers in place in this new world, his own reality begins to dissipate. “The film has a hypnotic pull,” says the LA Times, “drawing the viewer deeper and deeper into its enigmatic adventure by crafting a world all its own.”