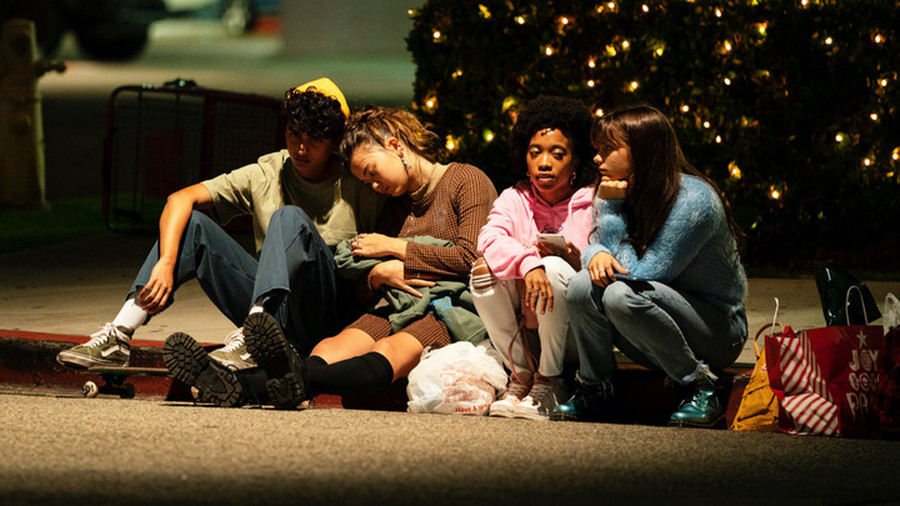 It was the biggest table Daniel Barnz, director of the 2014 Jennifer Aniston film “Cake,” had ever seen. It was like an “out of ‘Dr. Strangelove’” continental-sized table, matched only by the giant chasm between him and the HBO executives he’d come to pitch “Generation” (stylized as "Generat+ion"), which returned to HBO Max June 17.

His husband/producing partner Ben Barnz recalls sweating profusely, worried his nerves would start to show through his clothes. These two industry vets had been in plenty of conference rooms just like that one and had heard “no” a million times before, so, for all intents and purposes, they shouldn’t have been so worked up.

But this time was different. This meeting was special. Because that day, a couple of years ago, they were trying to sell the suits and, now executive producer, Lena Dunham on a very personal passion project they had created, with their teenage daughter Zelda Barnz, about a group of students in a GSA (Gay-Straight Alliance) club, loosely based on her real-life experiences and people she knew.

“I was so tense because you want to protect your daughter always, and we’d taken her into the lion’s den,” Ben said before Daniel jumped in to add, “Because our experience working in Hollywood is nine times out of 10, it doesn't happen or you get rejected. And you better get used to it. But then we thought that is actually a good thing for dads to teach their daughter — resilience, grit, and all those things you are supposed to be imparting to your children as a parent. So we approached it all like an exercise.”

“We, for a variety of reasons, never thought this was actually going to be a TV show, but we thought, if Zelda is open to it, what a great way to have this exchange of ideas and teach her a little bit about the work we do,” he continued. “We could talk about how you construct a TV show, write a screenplay or present yourself at a meeting.”

The Barnz men admit they had an ulterior motive that all parents who have reached (or survived) the teen phase can likely relate to. “It was mostly a selfish way to keep a conversation going with our daughter,” Daniel explained. “Because you're always looking for ways to stay connected to them when your kids are teenagers and on their divergent path ready to go out in the world.”

Zelda, it turns out, was game for the family project. She always dreamed of a career writing books, had been jotting down ideas and interesting things that happened to her and her friends, and thought “a story that really centered on and celebrated queer youth” would make a good novel…and eventually a great TV or film adaptation.

“I came out when I was 15. My brother had come out a few months before me to everybody — the family group chat, our carpool, everyone at school — all at once. That day, my parents texted me to check on [him], make sure he was ok. I didn’t understand why that was necessary. He was so fine [having] this fun day where he just told everybody he was gay,” she recounted.

“They were really surprised by that because for them, it was such a big deal growing up. We started having all these family conversations about queerness, identity, the huge generational divide, and society's attitude then and now and about how lucky we all are to be in this very queer family. They’d tell me to write it down, so we started developing characters together.”

The talks weren’t always easy to have and Daniel admits there were moments where he’d find himself “blushing and cringing. But I would try to push that squeamishness away because — as somebody who came from a family where these kinds of things, sexuality and drugs, were never discussed — I’d rather have a house where people feel like they can say anything, and sometimes it goes too far than one where they can’t be honest and keep secrets.”

One story she shared about a charismatic senior — who was student body president, was in the Rainbow Alliance, and would occasionally show up wearing high heels and performed for the school in drag — particularly grabbed Daniel’s attention.

“That was mind-blowing for us because someone being both [those things] was so far from our experience. I was like, ‘God, if we can construct a world around characters like that, who can be flawed and real and have that boldness and fearlessness, that’s something I would watch on TV.’”

Ben added, “When we were growing up, there was so much shame and fear, and there was AIDS. There was so much dark. There is so much more queer joy now, and that was another seed we wanted to plant and let grow out of these kids.”

Zelda got tips about the entertainment industry and Final Draft software tutorials. Her dads got a few lessons in new terminology and ways of identifying. Ultimately, like many parents before them, they realized they weren’t as cool as they used to be.

“When we adopted Zelda, who is almost 20, there were not a ton of same-sex couples adopting. For a long time, we thought it was so awesome that we were this cool, cutting-edge family,” Daniel said. “But when Zelda came home with these stories, and things seemed kind of foreign, it was a real moment of reckoning. [We] realized, wait a second, [we’re] a little old.”

After fleshing out the characters and figuring out a first season arc with Dunham’s help, it was time for the aforementioned meeting. That’s when a plot twist the Barnzes never saw coming — and probably wouldn’t have dared to write — occurred: Zelda absolutely nailed it.

“You have these moments with your kids where you turn around, and you suddenly see them very differently. Like, you see them how other people see them,” Daniel said. “We had practiced the pitch, but she was so preternaturally calm. I was terrified, but I knew I've got to match her game there so [she wouldn’t] get flustered. That was a great learn 'from your daughter moment.'”

Ben, who as a producer didn’t have to do any heavy lifting in that initial meeting, sat back equally impressed. “I went from sweaty nervousness to ‘Who are you?’ Our daughter stepped into herself. I was so proud. It was ridiculous.”

Her phenomenal showing that day set the stage for their working relationship and helped them relinquish much of the father-daughter dynamic and, instead, see her more as a coworker. “Zelda knew we had years of experience and could guide things on that front,” Daniel said. “We knew that her authenticity and her voice were the things that were going to make the show work, so that created a more equal power dynamic.”

It came down to trusting each other. “We realized that we had to listen, really listen, to our daughter if this was going to work,” Ben reiterated. “That made it all go really smooth.”

That and the fact that it was written in the stars. “Daniel and I work really well together. I mean Taurus and Virgo,” Zelda chimed in. “We learned to trust each other and communicate. I loved working with my parents. I still hope to write books, and I hope I get the opportunity to work in this TV world again.”

But first, they’ll have to see how the second half of season one of “Generation” does this summer. According to Daniel, the second block will explore mental health issues, develop some interesting triangles and dive into a “joyful and heartbreaking examination of female friendship.”

“Oh, and the gay dads get some good redemption. It’s time for them to have their humanizing moments,” Daniel added. If they are blessed with a second season, the trio assures that there are so many stories left to tell.

Fall will bring the family’s next milestone as Zelda is shipping off to Yale in the fall after taking a gap year to do the series and wait out the global pandemic. Ben, for one, knows she is ready. “She is bursting at the seams for more, to have a larger world, and she’s prepared for it.”

Daniel, on the other, not so much. “What a gift this year has been, working on a show and spending all that concentrated time together. Makes it feel a little less heartbreaking that she’s off. That said, there is no question that when we move her into her dorm room, I’m going to sob like a baby. Be prepared, Zelda. It’s going to happen and it’s gonna be messy.”