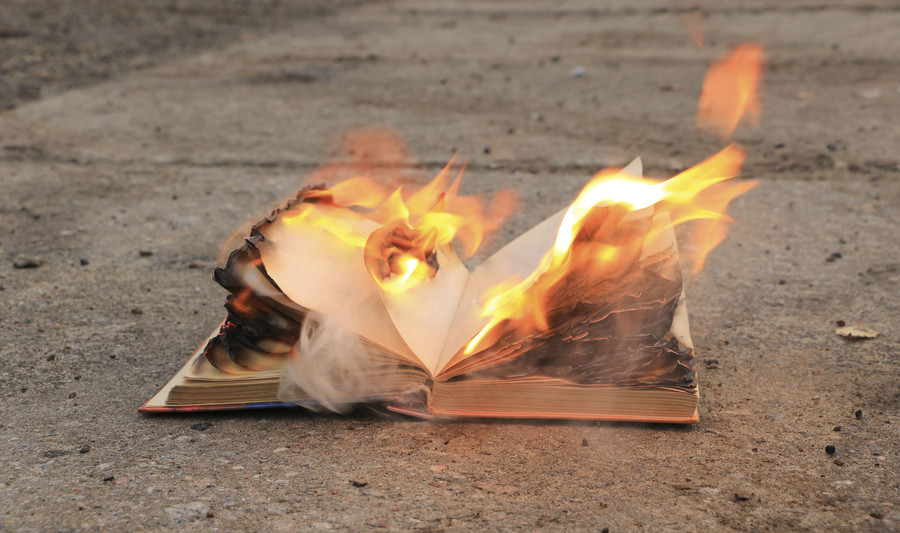 With HBO's new adaptation of Fahrenheit 451, the topic of book burning is back in the news. It's relatively well-known that Ray Bradbury was inspired to create his famous science fiction novel by movie newsreels of Nazi book fires of the 1930s — but what about other modern examples of book burning? Here are some of the stories you can read (or stream! Or both!) today, even though they've been considered offensive or dangerous as text.

Who could hate the boy wizard? Well, who other than Voldemort? Quite a few people. After author J.K. Rowling weighed in on President Trump's travel ban last February, several of his supporters tweeted that they would burn her books. The eloquent writer that she is, Rowling clapped back.

It wasn't her first time dealing with book burning threats either. The Potter series was also thrown in a bonfire in 2001 by a group that felt it encouraged satanism. Guess The Monster Book of Monsters isn't the only dangerous book in the HP universe.

When the central plot of your story involves Jesus' illegitimate daughter, it's bound to rile up some religious controversy. Upon its release (and the subsequent release of the movie), copies of Dan Brown's novel were burned by Catholic groups around the world. However, the best-seller had its defenders as well. At many of these bonfires, the crowds of counter-protesters outnumbered those gathered to burn the book.

That such an explicit book would incur some wrath is not surprising... but the group that did the burning kind of is. In 2012, a shelter for abused women announced plans to burn the trilogy, which it felt glorified domestic violence. "We are not burning the Bible or a political philosophy, we are burning the depiction of an abusive man as a romantic hero," said Clare Phillipson, director of the Wearside Women In Need.

The Grapes of Wrath

A classic American film based on a classic American novel by a classic American author. Hating on The Grapes of Wrath feels downright unpatriotic, but when the book was released in 1939 it was met with much praise and some ardent hostility. The Farmers Association of Kern County, California (where the Joad family ends their journey) felt those in their profession were unfairly portrayed as cruel to the migrant workers when they were trying to help as many as they could in that difficult time.

Beginning in 1933, thousands upon thousands of books were thrown to the flames by Nazis for being "Un-German" and "decadent." Among the authors whose work was deemed impure were Karl Marx, Franz Kafka, Sigmund Freud, Leo Tolstoy, H.G. Wells, Helen Keller, Ernest Hemingway, and Albert Einstein. Although it's not based on just one book, National Geographic's Einstein bio-miniseries outlines the genius's time in Germany, immigration to the US, and the work that made him a legend.

Storytelling is powerful (whatever the format), so make sure to...