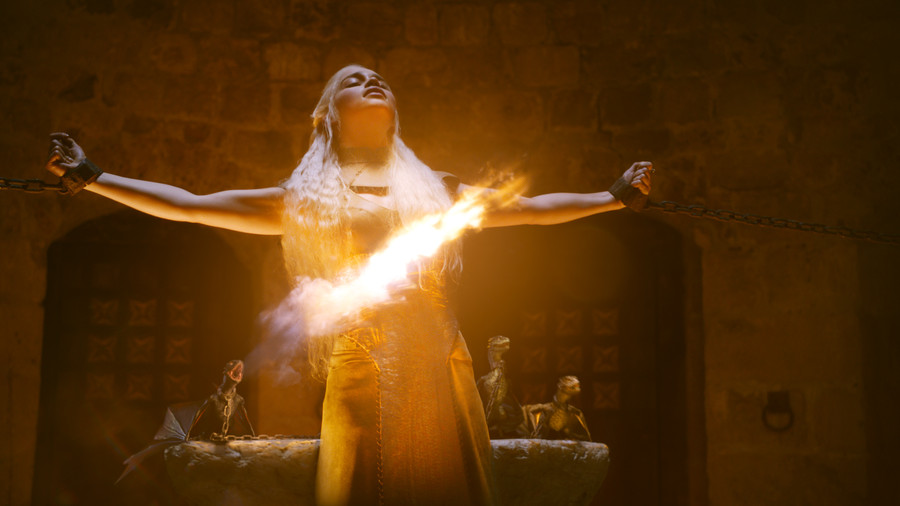 In the Game of Thrones universe, no Great House has had more influence over Westeros than the Targaryens. The only surviving scions of the Valyrian empire founded the greatest dynasty Westeros had ever seen, all while besieged by infighting, rebellion, and more than one case of madness. With the final season of Thrones upon us, let’s dive into the history of the dragonlords.

The Blood of Old Valyria

The Valyrian Freehold, based on a volcanic peninsula in southwest Essos, was the greatest and most prosperous society the world had ever known. The fair-haired Valyrians conquered the known world on the strength of their legendary steel weapons, and most of all, their dragons. What could possibly go wrong? Now, time to take a huge sip of Volantene red and look out the window…

...as fire and ash rain down from the sky, reducing the Valyrian peninsula to a cluster of smoking craters amidst a boiling sea. However it happened, one thing’s certain: everything was obliterated. The Valyrians were the greatest civilization the world had ever seen. Until they weren’t.

And they would have been completely erased from the history books if not for the Targaryens, who moved across the Narrow Sea to Dragonstone 12 years before the cataclysm. A few generations later came the founder of the dynasty that would create the Westeros we know today…

The Lord of Dragonstone was restless. Who wouldn’t get stir crazy sitting in the most metal castle ever and controlling a major trade route with your two sister-wives? So Aegon I Targaryen looked west, and declared, “I can conquer that. I’m gonna conquer that.” It’s said nobody ever really knew Aegon, and we certainly don’t know what possessed him to take over an entire continent. But when the Aegon and his sisters/wives Visenya and Rhaenys swooped in on dragonback, nobody was really in a position to argue the particulars.

The Targaryens quickly transformed Westeros from a backwards collection of petty kingdoms into a realm unified by Fire an Blood. Whether the existing royalty wisely bent the knee (Torrhen Stark) or got roasted alive along with their entire family (Harren Hoare), one by one, the kings of Westeros became lords, and three-headed dragon banners went up across the countryside—except Dorne, which wouldn’t fully buy in for another couple hundred years.

There would be no Westeros as we know it without Aegon, First of his Name, King of the Andals and the First Men, Lord of the Seven Kingdoms, and Protector of the Realm. He forged the Iron Throne, establishing a (mostly) peaceful reign and a line of succession that ensured the stability of his new kingdom. Everything went more or less according to plan, until...

The Dance of the Dragons

Look, all families squabble. Sometimes they get into a food fight in the great hall, other times someone forgets to disclose that they have a secret army waiting to turn the tide of a battle, and every once in a while, a son fires a crossbow at his father sitting on the toilet. But when the Targaryens fight, it becomes a years-long internecine conflict that destabilizes the entire realm and results in the loss of the superweapons that claimed Westeros for the family in the first place.

The details of the Dance are fairly byzantine—and that’s saying something for a show with more characters than your average Twitter post. At its core, it was a war of succession between princess Rhaenyra Targaryen and her much younger stepbrother, Aegon II. Rival factions formed around each claimant, and it wasn’t long before they took to land, sea, and sky against each other. The end of the Dance was especially horrifying: Aegon captured Rhaenyra and fed her to his dragon in front of her son. Then his own men poisoned him. In the end, it was Rhaenyra’s son—also named Aegon, because Targaryens—whose ascension put an end to the civil war. Aegon III developed a great distaste for dragons (watching one eat your mom will do that), and became known as “Dragonbane.” The last Targaryen dragon, which was about the size of a cat, died under his rule.

The Targaryens never recovered from the Dance. Between the split allegiances that weakened the foundation of the monarchy, and more importantly, the death of all those dragons, the ruling family of Westeros entered a downward spiral that would culminate in...

Aerys II Targaryen wasn’t always the Mad King. As a young man, he was a real charmer, and with his friend Tywin Lannister as Hand of the King, he brought peace and prosperity to the Seven Kingdoms. But, this being Game of Thrones, it wasn’t meant to last. Aerys descended into madness, due in part to whispers that Tywin was the real ruler of Westeros. As his paranoia and cruelty grew out of control, he came to love burning people alive with wildfire, including Ned Stark’s father Rickard and brother Brandon. Meanwhile, crown prince Rhaegar absconded with Ned’s sister Lyanna, betrothed to his best friend Robert Baratheon. Ned and Robert confronted Aerys about all this, the king called for their heads, and before you could say “burn them all,” the realm was consumed by Robert’s Rebellion. The war would extinguish the Targaryen dynasty with the deaths of Aerys, Rhaegar, and Rhaegar’s children. Aerys' younger son Viserys escaped across the Narrow Sea, but nobody ever took his chances of retaking the Iron Throne seriously. He did have a sister, though...

The Mother (and Aunt) of Dragons

We don’t need to list all the deeds (or all the titles, sheesh) of Daenerys Stormborn. We’ll cut to the chase: she brought dragons back into the world, she’s conquered ancient and glorious cities, and she’s back in Westeros to save the realm and win the throne with her broody boyfriend Jon Snow. Can anything stop her? Well, if the Dance of the Dragons taught us anything, it’s that competing Targaryen claims can result in a whole lot of Fire and Blood. It turns out that he’s not Jon Snow, or Jon Anything. He’s just the latest Aegon Targaryen, trueborn son of Rhaegar and Lyanna and the real Targaryen heir. How will Dany react when Jon’s know-it-all cousin Bran reveals that he’s got a better claim and is also her nephew? Then again, that’s kinda their family’s thing, so we may be looking at...

You really couldn’t ask for a better king and queen: two capable, battle-tested leaders who’ve overcome insurmountable odds, put their subjects first, and are incredibly good-looking. But before they can ride tandem on the Iron Throne, there’s this whole White Walker, Army of the Dead, War for the Dawn thing to resolve. Both remaining Targaryens know what’s stake here, and both have pledged to fight for the living with everything they’ve got. But even if they should succeed in defeating the Night King—who, by the way, has his own dragon now—will there be anything left to rule? Back in season two, Daenerys entered the House of the Undying in Qarth and saw a vision of snow falling on a ruined Red Keep. Jon and Dany may end up with their own Targaryen sobriquet: King and Queen of the Ashes.

Or, maybe Daenys will be the only Targaryen to have prophetic visions. Either way, we can’t wait to see the final chapter in Targaryen history play out. Tune in to the final season of Game of Thrones on HBO via DIRECTV.