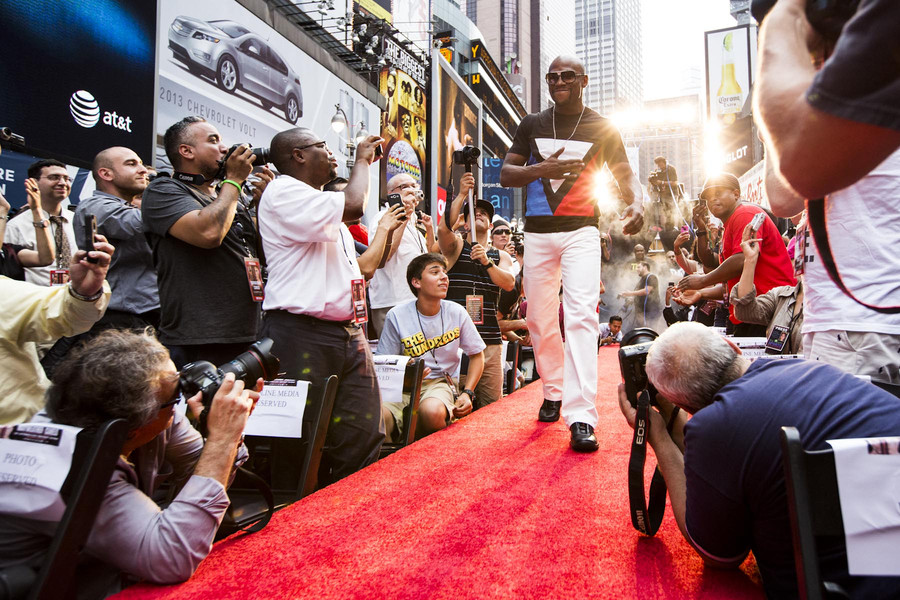 Terrell Gausha’s boxing story is familiar. He came out of nowhere to find amateur success, first at the Golden Gloves, then a trip to the Olympics. With a fight looming on Sept. 19 against Erickson Lubin, available on Showtime, we started wondering: Which former U.S. Olympian had the best professional boxing career?

So, here’s a look at our unofficial rankings.

Yes, we’re talking about the guy who got knocked out in 1 minute, 31 seconds by Mike Tyson. But Spinks made his name as a light heavyweight, winning his first world title in 1981 and defending it all the way to 1985 when he bumped up a weight class. He beat Larry Holmes to win a pair of heavyweight titles, he defended the titles a couple of times … and then came Tyson. Spinks is ranked in the top 50 boxers worldwide of all-time and is ranked ahead of several boxers on this list in boxrec’s rankings.

“Smokin’ Joe” is best remembered as a foil, with the biggest win of his career coming over Ali in Madison Square Garden in 1971. That win moved Frazier’s record to 27-0; he was the undisputed heavyweight champion for three years. But he won just five more bouts after the victory over Ali, losing twice to Ali and twice to Foreman as his career essentially came to an end at the age of 32.

If this was about who had the best power, Foreman would be at the top of the list. That knockout punch was on display in the 90s when Foreman made a comeback and regained a portion of the heavyweight title by knocking out 26-year-old Michael Moorer. Back in the 70s, Foreman beat Joe Frazier twice. As a middle-aged man, he went 12 rounds with Holyfield, losing a decision. And he racked up 68 knockouts in his 76 wins.

You’d be forgiven if you forgot about Whitaker. In an era of trash talk, big names, and ear biting, “Sweet Pea” just went about his business. He mostly worked as a defensive specialist, with just 17 knockouts in 40 wins. Though, that might be his only unimpressive statistic. He won world titles in four weight classes, but few people would recognize the boxers he beat because he fought in the less-publicized, lower weight classes. Still, The Ring magazine had Whitaker 10th on its list of the 100 best boxers in the last 80 years in 2002.

Holyfield oversaw the last great American dynasty atop the heavyweight boxing rankings. After knocking off Buster Douglas to win the heavyweight title, Holyfield dusted American challengers like George Foreman, Larry Holmes, and Riddick Bowe. After falling to Bowe in a rematch, Holyfield promptly won the title back, then beat Michael Moorer. The only boxer to win the undisputed champion in two weight classes (cruiserweight and heavyweight), Holyfield is No. 9 in BoxRec’s rankings of the greatest fighters of all-time.

“The Golden Boy” earned his nickname at the 1992 Olympics, where he took gold as a lightweight. And until he was 30, De La Hoya had a golden professional career, racking up 11 world titles in six divisions. He had a 35-2 record before he turned 30 years old but won just four fights thereafter. De La Hoya was fast but did more than sting like a bee, pounding out 30 knockouts in his 39 wins.

Jones was the man in the 1990s. He lost just once while facing an onslaught of top competition. He won world titles in the middleweight, super middleweight, and light heavyweight divisions. And though he also competed (and won titles) in the cruiserweight and heavyweight spots, he’s best known as a light-heavy, where he won 12 consecutive title bouts, a record for the highly competitive division. The Boxing Writers Association named him the fighter of the 1990s. And he’s technically not done yet. He has a Nov. 28 exhibition bout with Mike Tyson coming up.

In his first 13 years of fighting, Leonard lost just once, to Roberto Duran in a classic 1980 bout that went 15 rounds. And you probably know about the followup fight, where Duran famously told the referee “no mas” while quitting in the eighth round. Leonard was a showman, windmilling one hand while jabbing with the other. Sticking out his chin. Talking smack to other fighters. If you’ve got it, flaunt it. Leonard beat Tommy “The Hit Man” Hearns and “Marvelous” Marvin Hagler, back in boxing’s nickname golden era. He was named boxer of the decade for the 1980s. In his career, he won titles in five different weight divisions and earned a spot in the International Boxing Hall of Fame.

Evaluating Ali strictly as a boxer isn’t possible. He spent time in jail and was stripped of his world titles for refusing to serve in the military during the Vietnam War. He was an ambassador for peace, earning the Presidential Medal of Freedom from George W. Bush in 2005. He was colorful, playfully sparring with journalists both physically and verbally. Float like a butterfly, sting like a bee. I’m pretty. I’m a bad man. It’s hard to be humble when you’re as great as I am. His brilliant mind translated to the ring, where Ali famously outfoxed George Foreman with his rope-a-dope strategy to win the undisputed heavyweight title in 1974. Ali had some power as well, racking up 37 knockouts in his 56 wins.

It’s obvious when you look at his overall record. “Money” Mayweather is the best boxer of all-time, but there’s still controversy around him. He’s been accused of padding his record by avoiding big fights; he unretired to face MMA star Conor McGregor in a less than epic 2017 bout for his 50th win. Still, numbers don’t lie. Mayweather racked up 15 world titles, he has been named the best pound-for-pound fighter in history by a number of groups, and he was named the top fighter of the 2010s despite retiring in 2015. His defensive style wasn’t a thrill to watch and his 27 knockouts show he was more of a technical wizard than a powerhouse boxer. But the only real blemish on his record? A bronze medal at the 1996 Olympics.