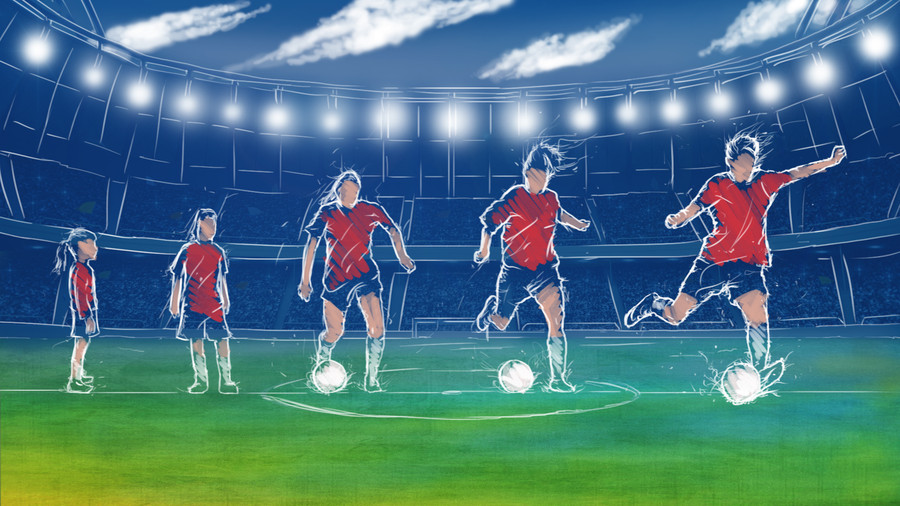 From the Pitch to Grassroots: Growing Support for the Women’s Game

During this Women’s World Cup, I went to visit a grassroots girls’ football team in York, in the north of England. The club had a girls’ team for each age group starting at under-10s to ladies. The passion they had for the game was infectious. The U10 team had only just formed, and lost every game of their first tournament. But despite this, the girls were on top of the world: “It was so exciting.” “When do we go on again?” “Next season we’re going to be better!’

After just three months of playing, football already meant so much to them. They had formed friendships, built confidence, found a sense of achievement, and that doesn’t even factor in the physical benefits of running around a football pitch.

If you’re even a casual fan of sports, you know their power to change lives, on both an individual level and on a wider scale. One of the York players suffers from anxiety, but when she plays football nothing else matters, and she feels free to be herself. I saw her go from uncomfortable, head down, and shoulders hunched to smiling and shouting as she whacked the ball into the back of the net.

But as I celebrated that player’s success, one of the girls told me she gets bullied and teased by the boys at school for playing football. Another said she gets told that “girls can’t play football.” The comments came thick and fast, all with the general tenor of “football is for boys.”

“We are emotionally blackmailed to take an interest in women’s football.”

Interestingly, my friend’s 8-year-old boy who had come with me was watching pitch-side, desperate to join in. He thought they were great. He didn’t even notice gender; he just saw a game he loves.

After I went home, it really bothered me that the next generation still doesn’t see girls playing football as the norm. This, despite the fact that there’s now a professional pathway for women, whether that’s playing the game, coaching it, or, like me, talking about it.

My career has gone from strength to strength, including milestones for women in sport and a large amount of advocacy work. But my first job in television was as a pitch-side reporter for live football. I was only 21 then, but like the York girls, I was so very conscious of stereotypes. I was a girl—and a girl from a poor socioeconomic background, a family with no education. Best to keep my expectations low.

To combat the doubt, I started to dress down and act more masculine. I put up a guard to try and show that I could take whatever insults were thrown at me. I’d pile on my own jokes, often derogatory to myself. Even several years into my career, I was anchoring live football, and all sorts of tricks were played on me to try and make me fail. My director would cut me off and only communicate to my male colleague so that I wouldn’t know when we were going to a commercial break or what match footage we were analyzing.

Six years ago, I took the Football Association’s course to get my football coaching badges, which would officially qualify me to coach young people in the game. I’m already qualified as a running coach and in teaching children’s athletics. But the course leader made me the butt of his jokes every morning in front of a group of around 30 men, who all laughed along with him. It was miserable, isolating, and completely knocked my confidence.

I find myself saying things like “that’s just the way things were back then.” I’m now in my mid-30’s and times have changed, right?

“Truth is, women are just no good at men’s sport.”

But in our schools, many young girls and boys still think that football is a men’s-only sport.

I know one girl who is ridiculously talented at the game, but sat in her school changing rooms upset and not wanting to practice. The reason? Her mum had bought her a pink tracksuit. She thought that meant she couldn’t play, just because she was a girl wearing pink.

How do we ensure that nobody decides they can’t play for such a silly reason? How do we make sure that the visibility of the women’s game at this year’s World Cup filters down to this grassroots level—not just to girls, but boys too?

Remember where kids get their influence from.

Children are like sponges, soaking up information and behaviors from their immediate environment. Beliefs and stereotypes around gender discrimination—or any discrimination, for that matter—get passed down at school and at home.

Often, we can’t change how a child is brought up at home. Not everyone is blessed with supportive parents, and it’s hard to change older adults’ ingrained belief systems.

But we can absolutely educate and empower a child at school.

A friend of mine who writes about women’s football pledged on social media to go into 10 schools and speak to primarily boys about equality for women, girls and female athletes. (My friend is male, by the way.) He got approached by over 20 schools after he made his pledge, showing that schools need this “curriculum.” I wonder if alongside the hugely important investment and visibility the media and brands are now giving women’s football globally, they can also invest in something less public-facing, like a genuine commitment to long-term change through education at a grassroots level in schools.

I read one comment on a recent article that said women don’t need men to support the women’s game. I couldn’t disagree more. To me, feminism doesn’t mean rejecting men, or masculinity. It means embracing equality. To leave out men from this conversation would contradict what feminism is about. It would just be more divisive, not inclusive.

And it wouldn’t be realistic. Young girls don’t live in an all-female world—why shouldn’t they have men’s reinforcement? Boys are their peers, their friends, and their family. Facing girls off against boys doesn’t help anybody. We need to teach boys it’s not just women that support women.

In fact, the U10 girls’ team from York were all encouraged by the boys in their lives. When I asked them why they decided to play football, they said, “because our older brothers inspired us to. We always looked up to them, and that’s what’s made us footballers.”

Imagine if these girls’ brothers told them that girls can’t play football?

Likewise, boys can be influenced and inspired by women. My friend’s 8-year-old boy was so excited about the Women’s World Cup (his favorite player is England’s Nikita Parris). Another boy took his Women’s World Cup sticker book into school to prove to some of his friends that yes, women play football too.

Yes, there are physical differences between men and women. But there is no such thing as a male or female sport. Anybody can play any sport and should have the opportunity to do so.

Why? It’s not just about the appearance of equality.

It’s because we know the power it can have on a young person’s life. It can convince a young person who has always been told they’ll never achieve, just like I was, that anything is possible. In wider society, sports can play a huge role in breaking stereotypes, not only in gender, but across the board.

Schools are where children learn, right? We need to teach them this.  It’s about changing beliefs from a young age, and it’s not happening fast enough.

Comments like the ones you see throughout this piece are rife on the web and social media. This kind of talk is a learned behavior, too. But by providing an empowering, uplifting alternative, we can make the football pitch a place where all are welcome.

Charlie Webster is an English broadcaster and journalist. She's written numerous columns for the likes of Sky Sports, the Huffington Post, The Independent, and The Telegraph, and in 2015 she became the first woman to present a globally televised heavyweight boxing match. She received an award from Parliament for her work in raising awareness of domestic abuse. Ms. Webster is also an accomplished marathon runner and Ironman triathlete. You can follow her on Instagram and Twitter.