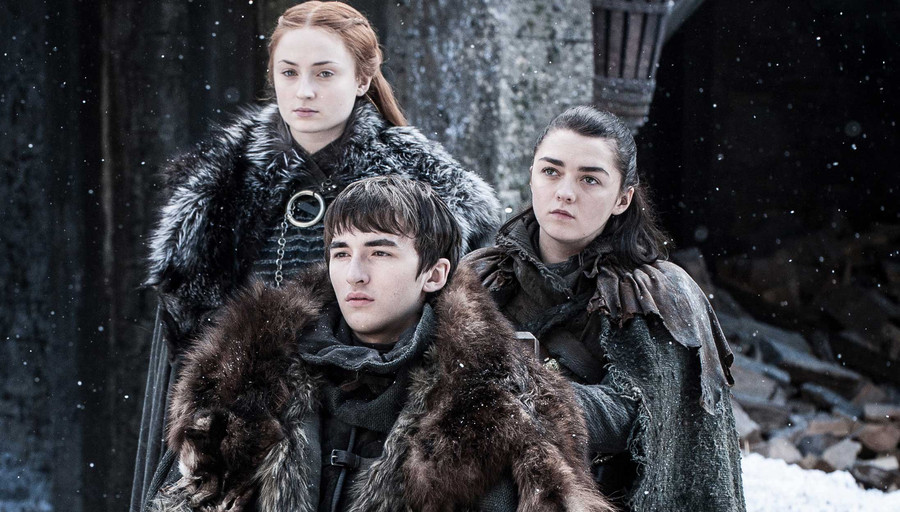 Winter Is Coming: A History of House Stark

Since its premiere, Game of Thrones has centered around the power struggle for the Iron Throne of Westeros. The major contenders to rule the Seven Kingdoms came from Westeros' seven Great Houses. Going into the HBO drama's final season, there are three houses still in contention: the Starks, Lannisters, and Targaryens.

House Stark is arguably the centerpiece of the show, as it was the vehicle back in season one that introduced fans to the political machinations of Westeros. The Great House of the North, founded by Bran the Builder a rumored 8,000 years' prior to the show's time period, has largely kept to itself, content to rule over the northernmost kingdom — that is, until Ned Stark (Sean Bean) and his children are dragged into the clash of kings and forced to do battle with Westeros' other Great Houses.

Every kingdom in Westeros wants to believe they're special. But the North truly is a region apart. Descended from the First Men (as in, the continent's earliest human inhabitants), they resisted the Andal invasion, and with rare exceptions, never adopted the Faith of the Seven like most of Westeros. Instead, they keep the Old Gods, praying in godswoods to red-leafed weirwood trees with faces carved into them, something that Ned holds near and dear to his heart on the show, as it informs his entire morality and sense of honor.

As one of the Great Houses, the Starks were independent rulers of the North until the Targaryen conquest of Westeros roughly 300 years ago. During that conquest, House Stark eventually pledged fealty to House Targaryen in perpetuity, something Daenerys (Emilia Clarke) was quick to remind Jon Snow (Kit Harington) of in Game of Thrones' most recent season. He was none too happy to receive the reminder, as Northmen are proud people, unaccustomed to pledging fealty to anyone, let alone a bunch of fair-haired southerners.

House Stark remained loyal to its pledge until about 17 years before the current era, when Robert Baratheon (Mark Addy) staged a rebellion against the Targaryens after "Mad" King Aerys II had the head of House Stark Rickard and his son Brandon executed. Rickard's second son Ned fought alongside his best friend Robert in said rebellion, which resulted in the deaths of most of House Targaryen and landed Robert on the Iron Throne. Meanwhile, Ned took over as head of House Stark. Westeros was mostly peaceful (save for a Greyjoy Rebellion that Ned helped squash) until Robert's death in season one of Thrones, which kicked off the War of the Five Kings. 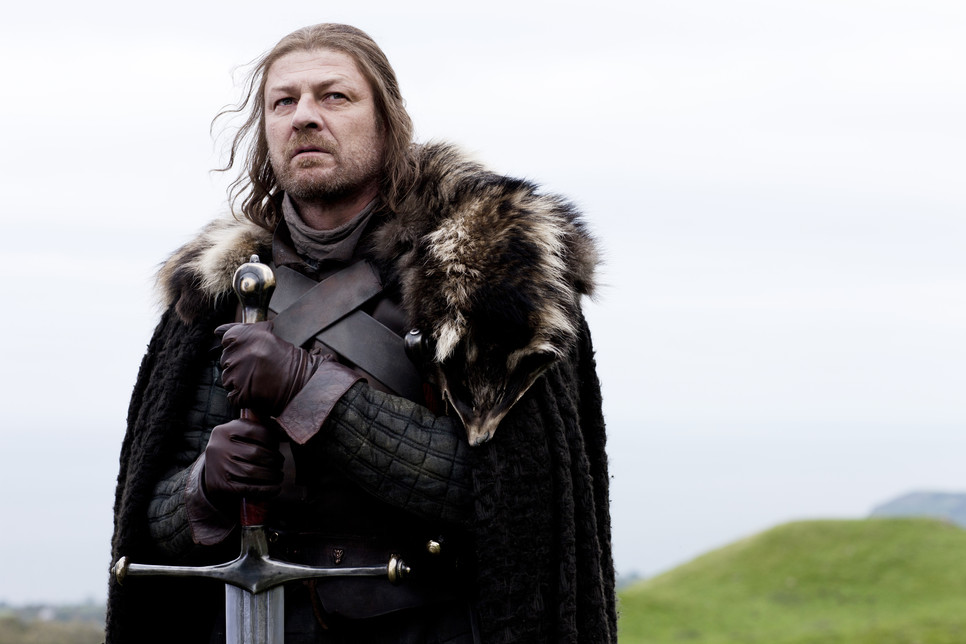 All is quiet on the House Stark front until Robert summons Ned to the capital, King's Landing, to take over as Hand of the King. Robert wants Ned's council and his investigative skills after former Hand Jon Arryn (John Standing) dies under suspicious circumstances. It is later revealed that Arryn was murdered because of Petyr Baelish's (Aidan Gillen) plot: to start a conflict between the Starks and Lannisters he made it look as though the Lannisters were behind the assassination.

When he journeys south, Ned brings with him daughters Sansa (Sophie Turner) and Arya (Maisie Williams), intending to wed Sansa to crown prince Joffrey Baratheon (Jack Gleeson). But in his time at King's Landing, Ned discovers that none of Robert's "rightful" heirs are actually his biological children; instead, they're the product of an incestuous relationship between his wife Cersei and her twin Jaime Lannister (Nikolaj Coster-Waldau), and the only children Robert has actually fathered are the nearly two dozen bastards running around King's Landing.

After Robert's untimely death in a boar hunt gone wrong (with a little help from some strongwine, courtesy of his loving wife), Ned's snooping and subsequent reveal of his findings earn him an arrest and eventual execution on the order of new King Joffrey. The fallout of Ned's death would reverberate across Westeros, as Baelish's scheming leads to the War of the Five Kings. 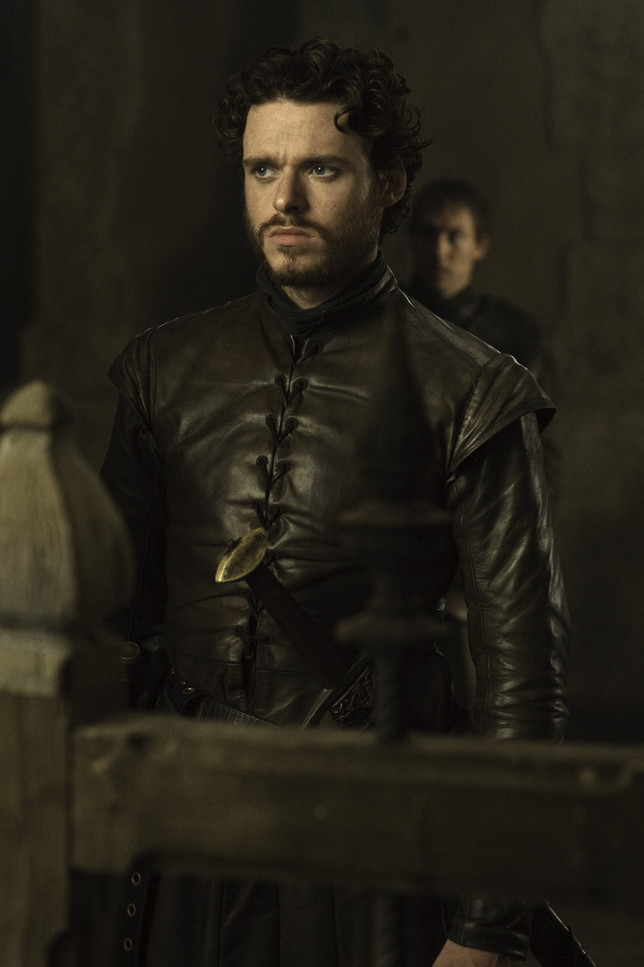 In the wake of Ned's death, his eldest son Robb (Richard Madden) takes over as ruler of House Stark and for a while puts up a formidable fight against the Lannister army, even managing to take Jaime prisoner. But a series of tactical errors — Catelyn releasing Jaime to use as a bargaining chip to get her daughters back from the Lannisters, Robb executing the head of House Karstark after he disobeys Robb's orders, Robb secretly marrying a woman instead of honoring his pledge to marry a daughter of House Frey — land House Stark in a heap of trouble.

The Karstarks desert House Stark after the execution of their lord, leaving the Northern forces severely depleted. Then when Robb offers up his uncle to marry a Frey daughter in his stead, the Freys respond by turning the wedding into a massacre. The Red Wedding nearly destroys House Stark, with Robb, his mother, his wife, and his unborn child wiped away in one fell swoop.

While all this is happening, Ned's former ward Theon Greyjoy (Alfie Allen) invades Winterfell and takes the capital of the North for the Iron Islands. He claims that in the siege he killed younger Stark sons Bran (Isaac Hempstead-Wright) and Rickon (Art Parkinson), though in actuality they escaped the castle and Theon staged their deaths using the bodies of two farm boys. Theon believes he'll now rule the North with all the male Stark heirs dead, but in the aftermath of the Red Wedding, the North is given to House Bolton. 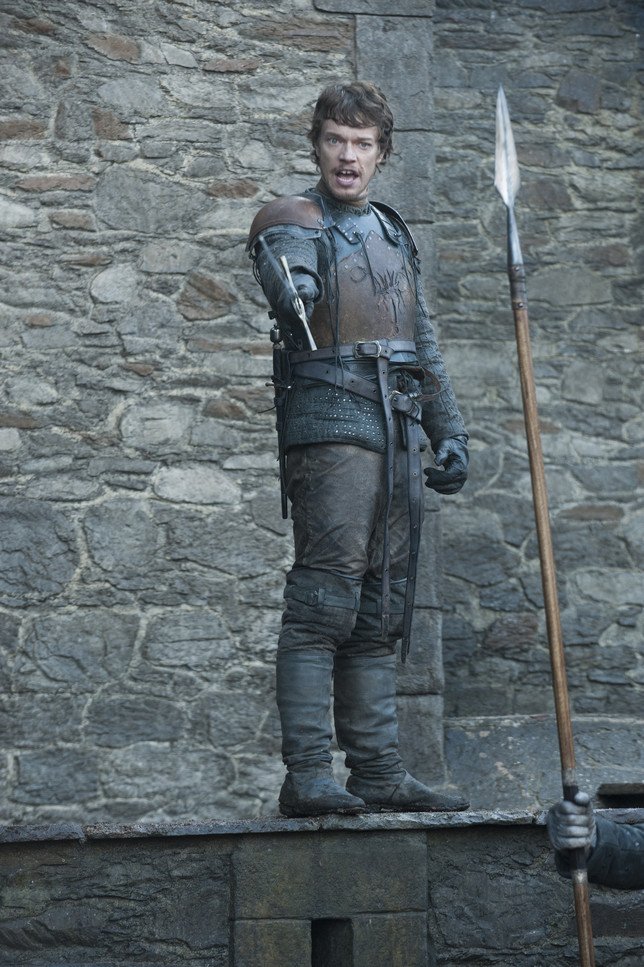 Of course, The Bastard of Winterfell Jon Snow is still alive and well (for now), but even if he were a trueborn Stark, he relinquished his claim upon joining the Night's Watch. Meanwhile, Ned's eldest daughter Sansa is forced to marry Tyrion Lannister (Peter Dinklage) and held captive at King's Landing, while Arya is wandering the countryside evading Lannister search parties.

Bran and Rickon are also still out there, though everyone in Westeros believes them to be dead. They start their journey to the Wall to join Jon, but when Bran realizes he has to go further than that Rickon and Osha split from the group for safety. Bran and company continue to journey beyond the Wall to find the Three-Eyed Raven, a greenseer who will train Bran to unlock the magical powers he's been experimenting with since the second episode of the show. 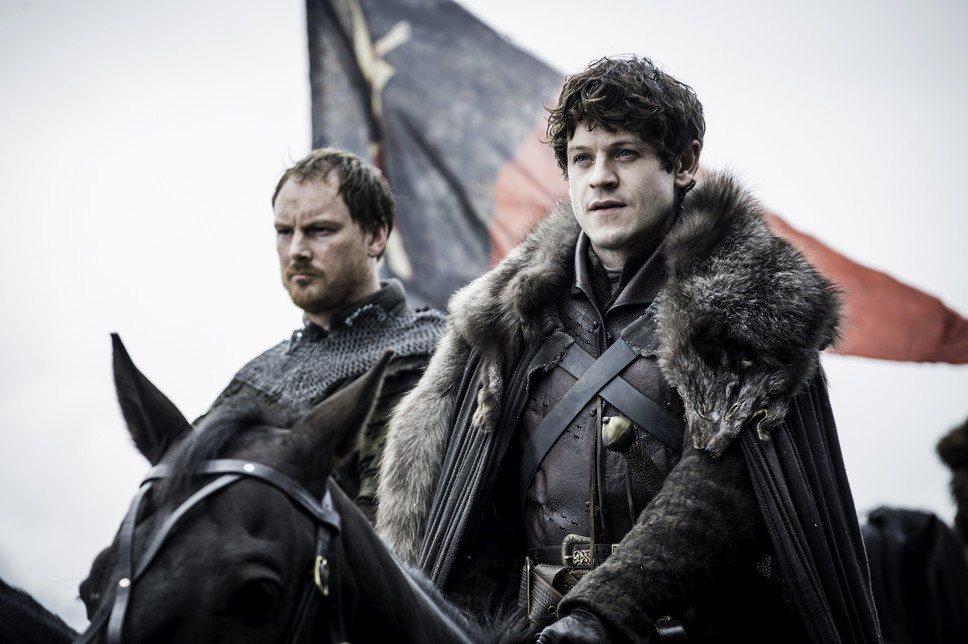 Petyr Baelish helps Sansa escape King's Landing and return her to Winterfell...only to marry her off to the unimaginably cruel Ramsay, son of Red Wedding co-conspirator and new Warden of the North, Roose Bolton. Baelish claims he's helping her reclaim her home, but in the meantime, she must endure Ramsay's constant abuse and sexual assault.

Sansa eventually escapes with Theon's help and reunites with her half-brother Jon (who, by the way, was resurrected from the dead—he doesn't like to talk about it) at Castle Black. The two work together to rally the remaining stark loyalists to defeat Ramsay's army and save their youngest brother Rickon from his clutches. Though they aren't able to save Rickon,  the Starks ultimately defeat House Bolton thanks to Sansa's secret plan to send in the Knights of the Vale. Then Sansa, in a delicious moment of revenge, feeds Ramsay to his own hounds. Jon Snow is declared the King in the North for his role in avenging the Red Wedding, and begins training his men to fight the coming White Walker invasion. 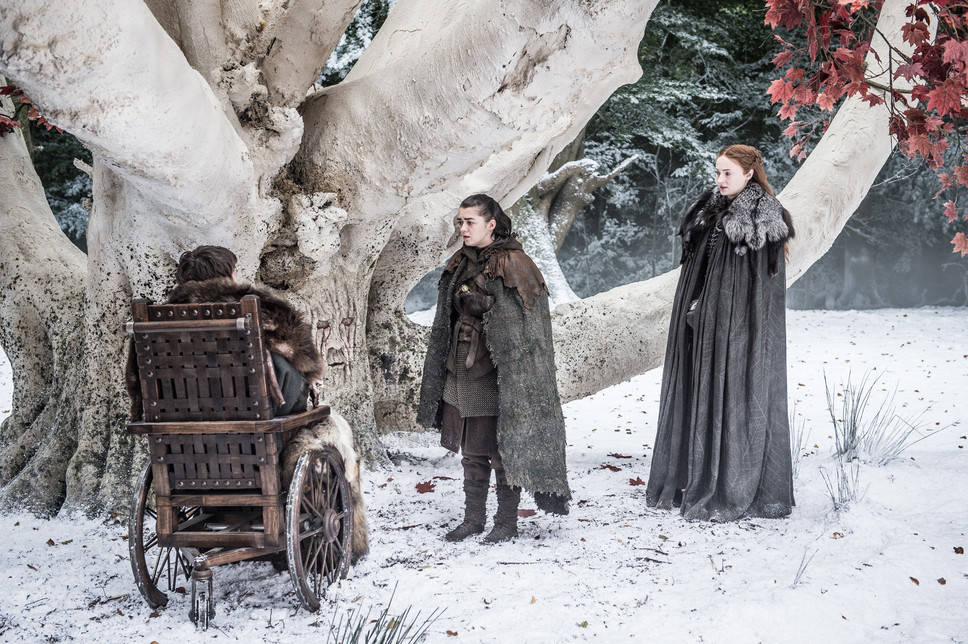 Arya, meanwhile, has returned from Braavos after two seasons of assassin training with the Faceless Men. Along the way to Winterfell, she uses her finely honed skills to massacre the Freys and avenge the Red Wedding. 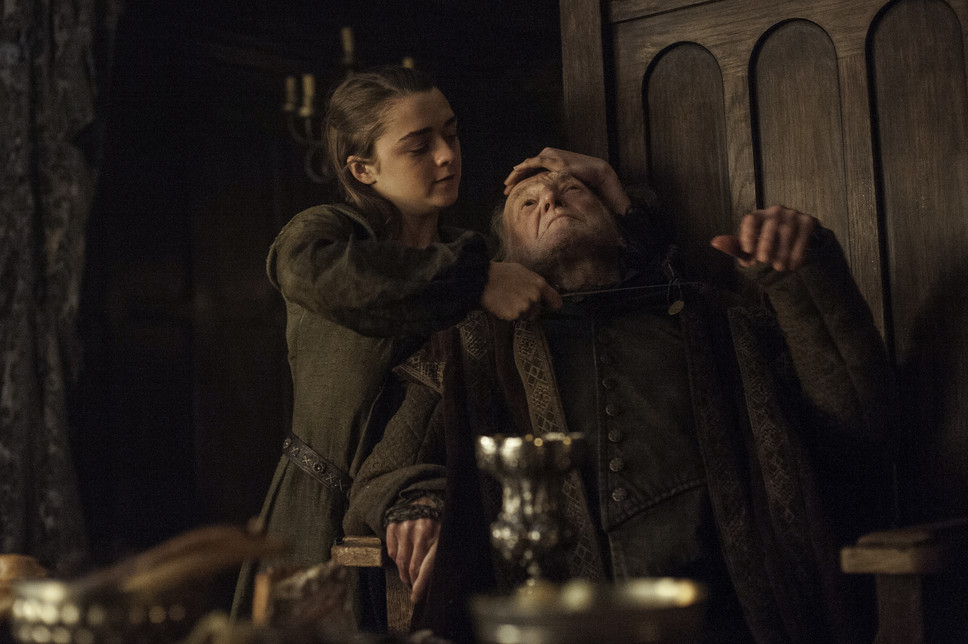 When Jon receives an invitation to Dragonstone to bend the knee to Daenerys, he decides to meet her but not to pledge allegiance. As he leaves he declares Sansa ruler of the North in his absence.

Sansa does well presiding over Winterfell, preparing for the upcoming long winter. She reunites with both Bran and Arya, and together, they realize that Baelish has been manipulating the Starks for years. Sansa eventually sentences him to death, which Arya carries out a little too happily. 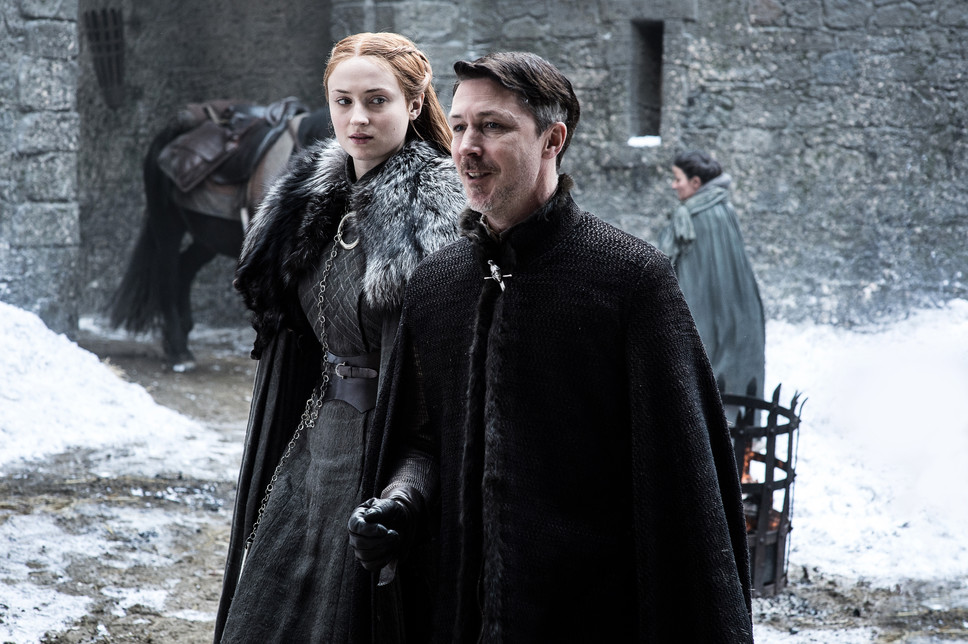 Meanwhile, Jon and Daenerys struggle to form an alliance. Dany thinks he should declare her his queen while Jon knows his people won't accept what amounts to foreign rule. They reach an understanding (and then some) after Jon sets out to prove to Daenerys and Queen Cersei that the Army of the Dead is real. In the aftermath of an expedition beyond the Wall gone awry, the two comfort each other on a boat ride we'll never forget. Just as they begin to sing their own song of ice and fire, Bran sees into the past and pieces together the mystery of Jon's real parentage. 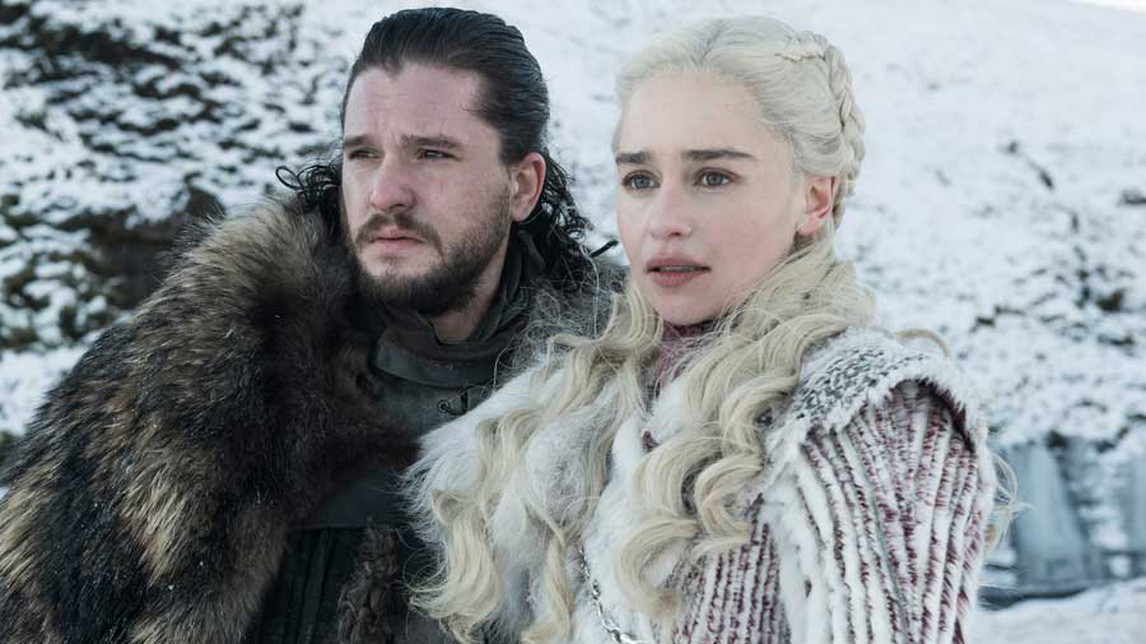 In his visions, Bran corroborates what the show revealed in the season six finale: Jon Snow is actually Aegon Targaryen, the son of Rhaegar Targaryen (Daenerys' older brother) and Lyanna Stark (Ned's younger sister), who wed in a secret ceremony. So he's not really a Stark, and he's definitely not a bastard. He is the rightful heir to the Iron Throne, and also his new girlfriend's nephew.

What to expect in Season 8

When Game of Thrones returns for its eighth and final season on April 14, the Stark drama should pick up right where it left off. What happens when Bran reveals Jon's parentage? Is Sansa the new permanent Lady of Winterfell? Will Jon tousle Arya's hair? Meanwhile, the Wall has fallen at the hands of the Night King and his invading army, so there's a Great War to fight, and the Starks look to lead the charge. Get caught up on the Starks and the rest of Westeros in advance of the premiere by revisiting your favorite Game of Thrones episodes on DIRECTV.