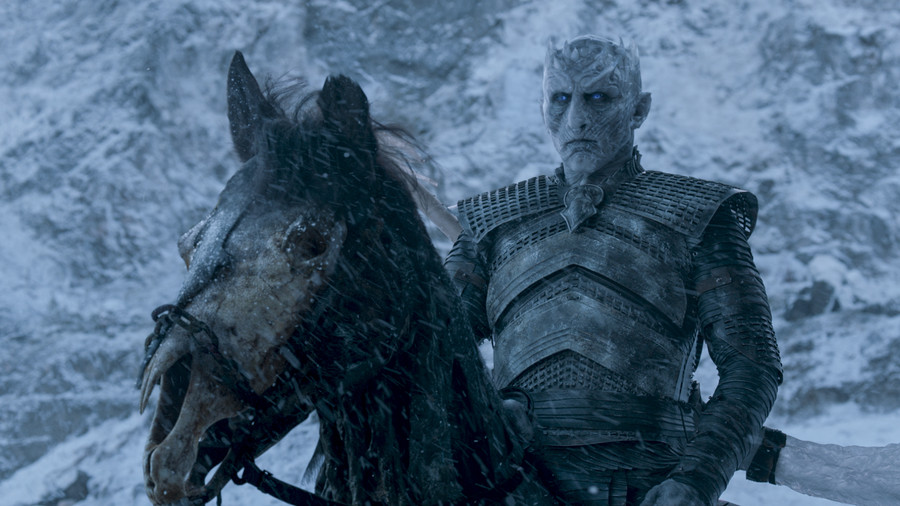 (Warning: This post contains spoilers for the third episode of "Game of Thrones" Season 8, titled "The Long Night")

While Arya Stark is clearly the winner of the Battle of Winterfell for slaying the Night King in the closing moments of Sunday's episode, we have to give a shout-out to the man who slayed the score: Ramin Djawadi.

The long-time "Game of Thrones" composer is responsible for the eerie music you hear throughout the 1-hour, 22-minute episode, including the chilling "The Night King" theme that plays when all seems lost — just before Maisie Williams' Arya comes in to save the day with the late Littlefinger's Valyrian steel blade.

TheWrap spoke with Djawadi Monday about crafting that particular theme (which you can listen to above), and the uber-length battle episode, "The Long Night," in its entirety — which was no easy feat.

"The episode as a whole is definitely one big focus, because it's just one big arc. But the piece at the end, the piano piece, I feel stands out and is so different," Djawadi told TheWrap. "And if you look in the history of the 'Game of Thrones' score, we only really had one other big piano piece and that was in Season 6, the piece that we call 'Light of the Seven,' when Cersei blows up the Sept [of Baelor]. And that was the first time that we used the piano. So when we got together for this season we said, 'OK, this is another moment now where the piano could be the right choice of instrument again.' It's the ending of this unbelievable battle sequence and yet the score needs to shift you from all the action and the music and ups and downs that came before and so we thought it's time for the piano again."

"It was really a challenge to write because, similar to the 'Light of the Seven,' there is very little dialogue," he continued. "I think there's two sentences in there — Bran thanking Theon and that is it. The rest is all music. But the big difference compared to the 'Light of the Seven' piece is that this piece is at the end of the episode. The 'Light of the Seven' was at the beginning of the episode and things slowly unravel and you get to see things and the audience is figuring things out. The difference here is it's the end of this big episode and it's just — the plan is over. Like when the piano plays, there is nothing to unravel anymore except this is it. It's over. This battle cannot be won. And it's just haunting sadness as the Night King approaches Bran."

Except we all now know that isn't how it ends. And, actually, Djawadi learned that almost a year ago — when he first saw a rough cut of the episode with "Game of Thrones" showrunners David Benioff and D.B. Weiss and director Miguel Sapochnik — he could begin to breakdown what was needed. (Yes, we're very jealous, too).

"The process is, David and Dan and I, we get together in a room and we watch the episode together and discuss every scene," he said. "And I work sequentially through the episode and make a list and then they go, 'OK, let's take a look at this one early so we really can dig into this.' And the 'Light of the Seven' was one of the pieces I started episode, and this particular episode I also started very early, too."

Djawadi loves that he gets to see the episodes early because he then has "so much time to figure out where the music is going." But in the case of "The Long Night," it seems nothing could truly prepare him for the task at hand.

"This episode was the most challenging episode to-date to write because of the sheer amount of music, the battle sequences," he said. "I spent at least double, if not three times as much time writing this one compared to the other ones because of the challenges. Like, for example, the longest battle sequence we ever had was on [Season 6's] 'Battle of the Bastards,' which was 17 minutes, which is a significant amount of action music and is just one battle scene. And then compared to this episode — which is the entire episode and its an uber-length episode that is 80-plus minutes — to get that right and to constantly have the tension rising and then to reset to create a little bit of hope, like our heroes can maybe defeat the Night King, and to get that right took a while."

We tried to get Djawadi to spill on what we can expect from the score in the final three episodes of the series, but this is all he'd give us: "I guess I can say the first two episodes were really a great setup for Episode 3 and all of them come together for this and the big payoff in Episode 3, but we'll have to see what comes next… I'm always cautious because music is such a big character in the show and helps tell the story so all I can say is watching what comes next."

Oh, and if you loved "The Night King" theme as much as we did, be sure to rewatch and look out for hints of it earlier in the episode, as Djawadi pointed out to us it's "kind of woven in and out with all the action."

"That motif plays earlier and then it actually comes back on the piano, and that might not stick out to everybody right away but it's there and then the big payoff is when it comes in on the piano," he said.

'Game of Thrones' Season 8, Episode 4 Preview: The Great War Is Won, But the Last One Has Just Begun (Video)

'Game of Thrones' Season 8, Episode 3: 4 Biggest Questions Answered and 15 We Have Left

This article was written by Jennifer Maas from The Wrap and was legally licensed through the NewsCred publisher network. Please direct all licensing questions to legal@newscred.com.