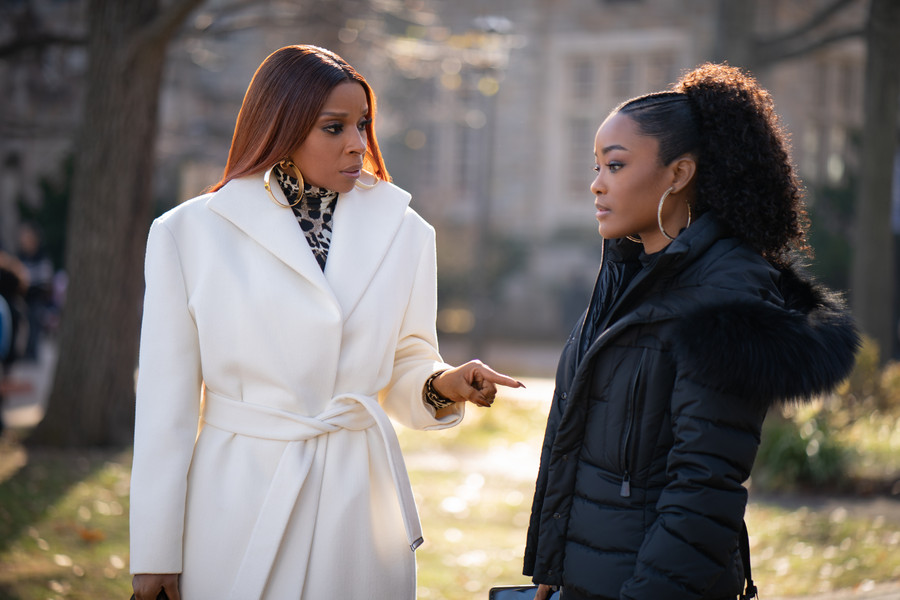 The sixth season of "Power" was promoted heavily as both the final season and the season where the show's central character - James "Ghost" St. Patrick (played by Omari Hardwick) - would be taking his final breath. When it came time for the series finale in February of 2020, Starz delivered on both promises. However, what we did not know before the finale was that showrunner/creator Courtney Kemp and executive producer 50 Cent had full intentions to craft in Ghost's absence an entire "Power" universe, akin to the Marvel Cinematic Universe.

While Ghost's crusade of criminals isn't exactly The Avengers, they are surrounding supporting players who will be moved to the forefront for the sake of the follow up "Books." The first spinoff to be released will be "Power Book II: Ghost", which will focus on Ghost's son, Tariq, trying to care for his family by himself now that his father is dead and his mother is in prison.

The first episode of "Ghost" is available to watch now, so depending on when you're reading this, you may not have enough time to binge every single episode before diving into the newest addition of the "Power" universe. Well, we're here to fill you in on everything you need to know about the characters, twists and turns before continuing into a new series.

Let's start at the beginning.

Initially, the "Power" universe was centered around James St. Patrick, a prestigious New York club owner by day and a feared drug kingpin by night, with his best friend Tommy Egan (Joseph Sikora) in tow as his right-hand man. Looking to 'go legit', St. Patrick wants to leave the criminal world behind, despite the luxuries that crime afforded him, including an upper-class family comprised of three children — teen twins Tariq and Raina (Michael Rainey Jr., Donshea Hopkins) and newborn Yasmine (Amaya Carr) — and a wife — Tasha St. Patrick (played by Naturi Naughton) — who was vehemently against the thought of James ever straying away from being 'Ghost'.

Things got all the more complicated for Ghost when he rekindled an affair with high school sweetheart, Angela Valdes (Lela Loren), who happened to be an FBI attorney. Unsurprisingly, their breakup was messy, due in part to Valdes personally arresting Ghost for a murder he did not commit. James beat the case, but by then, St. Patrick's professional reputation had been tarnished and his relationship with his wife and son permanently ruptured.

Tariq turned down a dark path, taking steps to rebel from his suburban lifestyle and immerse himself into the street life. James and Tasha's bitter back and forth distracted each other enough that they had when no idea when their son started falling in with the wrong crowd — namely, being taken under the wing of Kanan Stark (50 Cent), a drug dealer fresh out of a prison stint who held a grudge against his former mentee, Ghost. Kanan attempted to use Tariq to enact his Shakespearean vengeance, only for the tables to turn when Tariq set the wheels in motion for Kanan himself to be killed instead in hopes of protecting and repairing relationships within his own family.

Tariq's rookie street crimes eventually saw him becoming a target for crooked cop Ray Ray (Marcus Callender), who murders Tariq's twin sister, Raina when he cannot get to the boy. Tariq returned the favor by killing Ray Ray, but the following season, the ordeal forced Ghost into a rage, pointing blame at everyone for his daughter's murder, including his son. Ghost and Tariq's father-son dynamic became permanently fractured, and they began to hate each other in earnest; Ghost because he recognized that his son is just as conniving and untrustworthy as he himself was as a youth, and Tariq because he wanted to be nothing like his father after learning of his dirty past.

In hopes of steering Tariq away from the street life, Ghost sent the boy away to complete his education at Tony Choate Rosemary Hall private school. Ironically enough, Tariq decided to bring the streets to his new school by selling drugs on campus with the help of his friend Brayden (Gianni Paolo, who's returning for "Ghost) and new girlfriend, the mysterious Effie (Alix Lapri). We say "mysterious" because Effie ended up ratting her boyfriend out to Choate officials when she gave an anonymous tip about Tariq's nefarious campus schemes, leading to his expulsion. It's never explained why Effie did this behind Tariq's back, but it's safe to speculate that this is a storyline that will be further explained and resolved by the end of "Ghost."

Meanwhile, James opted to leave the world of crime for good in exchange for a political career. Things were going in Ghost's favor until he tried to encourage Tariq to turn himself into the police for murdering Ray Ray. Ghost was of the belief that if — or, rather, when — he won the Lieutenant Governor position, he'd be able to get his son a light sentence or possibly probation so that their family can scrub their hands of the drug game once and for all, and hopefully mend fences with each other in the process.

Tariq didn't receive Ghost's plan with open arms, nor did his mother who wasn't keen on losing a child to the streets or prison. So they concocted a plan to kill Ghost at his night club, and Tariq pulled the trigger himself. Tasha tried to frame her new boyfriend, Q, for James' murder, but due to an unforeseen complication, the NYPD pins Ghost's murder on Tasha instead. To save Tariq from prosecution, she took the wrap.

That leads us to " Ghost," which Naturi Naughton confirmed on Instagram (h/t Newsweek) will take place 48 hours after the events of the "Power" finale.

Despite his mother urging him to use this close call as a way to live his life and focus on school, "Ghost" will see Tariq being hellbent on working towards Tasha's freedom. Since his father's will ensures Tariq will not see a dime of his inheritance until he obtains a college degree, Tariq scrapes for cash trying to afford a lawyer (played by rapper Cliff "Method Man" Smith). With all of Ghost's connections gone (including Tariq's godfather Tommy, who skips town and is expected to get his own spinoff), Tariq is all alone.

He decides to make his money by continuing to delve deeper into the drug game, encountering rival queen-pin Monet (Mary J. Blige). All the while disgraced former FBI attorney Cooper Saxe (Shane Johnson) — who was heavily involved with investigating Ghost's crimes before he was fired — becomes obsessed with trying to learn what really happened the night that James St. Patrick was murdered.

In an interview with Variety, 50 Cent has already promised the show will be more "female-oriented" by comparison of its predecessor, suggesting that we may be seeing a lot of Tasha St. Patrick despite the widow now serving a bid in prison. This also hints at just how large Mary J. Blige's role on the show will be in her introduction.

Regardless, we'll have to wait until September 6th to see what this all means for the St. Patrick family, and the remainder of the Power universe, but stay tuned because the first episode of "Ghost" premieres 9/6 at 9pm on Starz.