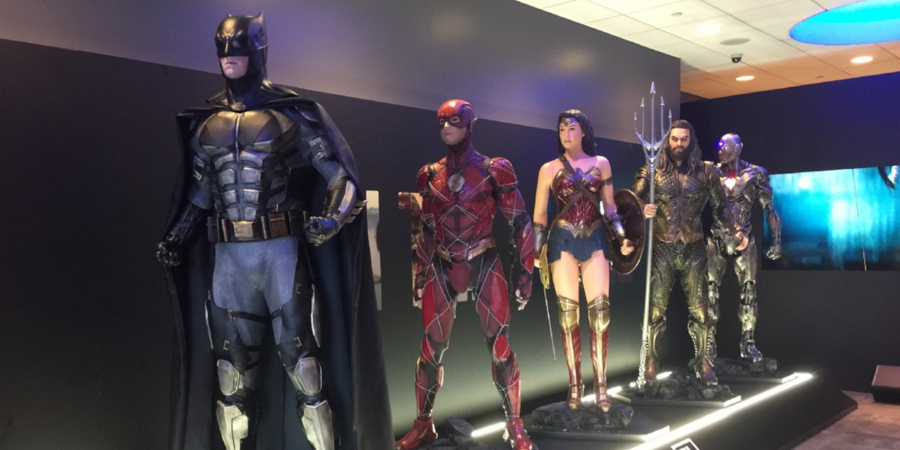 Even if you’re not going to New York Comic Con this weekend, you can still geek out with a special up-close and personal look at the upcoming Justice League film. The AT&T store at 3 Times Square (between 42nd and 43rd Streets) is being transformed into Justice League central this weekend, no badge required.

Upstairs, fans can pose for photos with lifelike statues of the main Justice League cast while reliving every thrilling moment of the film’s trailer, but the real good stuff is downstairs.

Posters featuring Batman, Wonder Woman, Aquaman, Flash and Cyborg are everywhere you turn. Actual props and costumes worn by the actors in Justice League are on display, and they truly are a sight to behold. Sure, you’ve seen some of these outfits in earlier DC films, concept drawings and appearances in trailers, but where else have you been able to study them so closely?

We spent a lot of time poring over the symbols engraved on Gal Gadot’s Wonder Woman sword and the scales on Jason Momoa’s Aquaman armor, but our favorite details many people never get the chance to see were on Ezra Miller’s Flash costume.

If you look closely at his boots, you can see all the scuff marks and a small tear on Flash’s left boot. Of course, the speedster’s shoes would be beat up from tearing up the pavement. It’s one of the small details that makes these costumes by designer Michael Wilkinson so interesting to study.

Make sure you come out in your best superhero costume, because you can also take a photo alongside Flash, Batman, Aquaman, Wonder Woman and Cyborg at the Join the League Photo Experience. You just need to pose in front of the green screen, and you’ll get a printed photo and lanyard featuring you and your new best friends, the Justice League. There are also free posters available while supplies last.

On Saturday, writer and one of the brains behind the DC Extended Universe Geoff Johns will join legendary artist and Co-Publisher of DC Comics Jim Lee for a special appearance at the AT&T store. Space is limited to the first 150 fans, so get there early. Wristbands will be distributed starting at 10 a.m. on Saturday.

The AT&T store is also just a short walk from where the new Batmobile and Bruce Wayne’s Mercedes-Benz AMG Vision Gran Turismo is on display in Times Square.