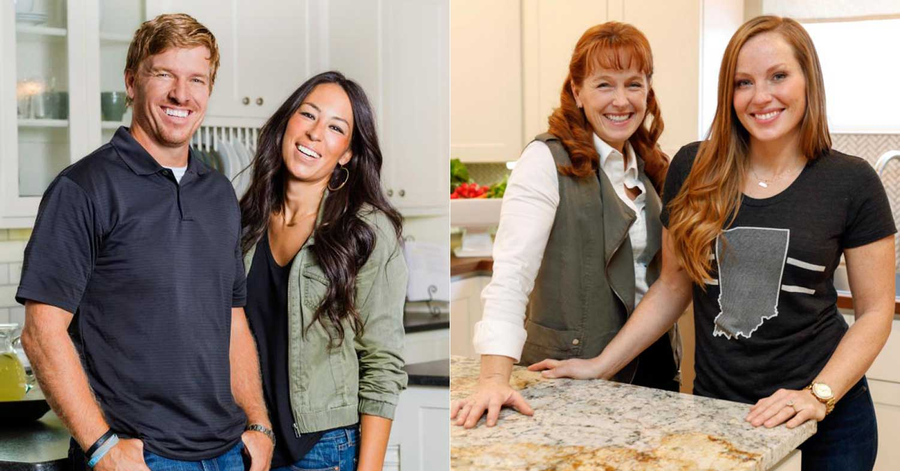 Fixer Upper, the popular HGTV renovation series starring Chip and Joanna Gaines, went off the air earlier this year as the stars decided to take some time off and focus on their family — they welcomed their fifth child on June 23. If you're sitting at home pining away for subway tiles and shiplap, we've got three big reasons why Good Bones should be your new favorite show.

Double Tap if you're ready to see the demo boyz gang back together in Season 3! #goodbones #season3iscoming #GOODBON3S #twochicksandahammer #demo

A lot of HGTV shows focus on a pair renovators or designers who are related — Chip and Joanna Gaines are married, Property Brothers' Drew and Jonathan Scott are twins, Flip or Flop's Tarek and Christina El Moussa are...well, it's complicated — and Good Bones is no different. It stars Karen Laine and Mina Starsiak Hawk of Indianapolis, Indiana, a mother-daughter team. They also sometimes work with Tad, Karen's son and Mina's half-brother, and Lenny, Tad's father and Karen's husband. It truly is a family affair.

It's so down to earth

Part of Fixer Upper's charm was the folksy way Chip and Joanna set about renovating houses for the people in and around their hometown of Waco, Texas. Karen and Mina are the same way in their home state. The whole idea behind the show is that they're out to revitalize two historic Indianapolis neighborhoods by renovating houses that have fallen into severe disrepair. It's not about the money, though turning a profit is still important to keep the women's business afloat. But you can tell their main goal is to beautify their beloved city — and the show makes an effort to show the hard, gritty side of house renovation.

It's also refreshing to see how much they get done with small amounts of money. It's an inspiration to all of us DIY-ers out there who don't have a million-dollar budget (we're looking at you, House Hunters).

Women be doin' it for themselves

If Johanna's spunk and no-nonsense attitude spoke to your soul, we take it you appreciate women who aren't afraid to roll up their sleeves and dive in. But let's face it — most home renovation shows feature either two men or a man and a woman working together, with the men oftentimes doing the literal heavy lifting. Not this one. Karen and Mina do the lion's share of the work all by themselves. They aren't afraid to get their hands dirty and work up a sweat in their quest to turn each dilapidated home around. In fact, their home rehab business is called Two Chicks and a Hammer, Inc. and in a recent interview, they told Indianapolis Monthly that they are almost entirely self-taught.

"Most of it we learned along the way,” says Mina. "I read the directions for flooring and putting up light fixtures. I watched YouTube to figure out how to tile."

Good Bones wrapped up its third season in June 2018; you can get caught up on DIRECTV. But there is no word yet as to a fourth season — Mina just gave birth to her first child on Aug. 9, so she may need a little time before she's back swinging the demolition sledgehammer again. But we would be pretty surprised if HGTV doesn't bring back this popular show for many more seasons to come.