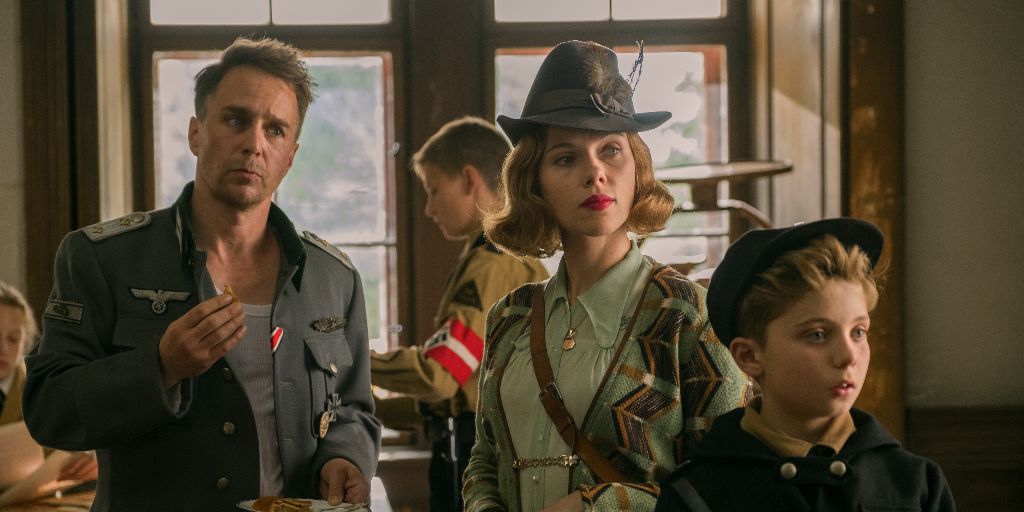 Flying home from the Toronto International Film Festival, I was talking about this year's Oscar race with an editor from another publication. He told me his boss believed that "Jojo Rabbit," the strange, slapstick story of a Hitler Youth member coming to realize the awful truth of his hateful beliefs, would win best picture.

I shook my head, incredulous. My reply: "Pfffft. It's not even going to be nominated."

Four days later, the Toronto festival announced that "Jojo Rabbit" had won its coveted People's Choice Award, prompting me to rewrite the introduction of an early look at this year's awards season landscape and rethink everything I thought I knew about "Jojo Rabbit."

Ten of the last 11 movies to win Toronto's People's Choice Award — voted on by festivalgoers — went on to earn best-picture Oscar nominations. "Green Book" took the Toronto honor last year and then won everything else, including the Oscar. It was a remarkable run that astounded many, angered some and left me surprised that such a conventional crowd-pleaser could prevail with an academy that has so radically changed and expanded its membership the last few years.

"Green Book" was my Oscar blind spot. And I have a feeling that "Jojo Rabbit" might be that movie this year. I saw it in August, shortly before talking with its writer-director, Taika Waititi, who also plays Hitler in the movie.

Waititi added the Hitler character as a comic foil because he didn't want "Jojo Rabbit" to be a sad Holocaust movie. It isn't, though there is a scene, signaled by a fluttering butterfly, that will move you to either tears or anger, depending on your ability to stomach shameless manipulation.

The idea of the movie is undeniably audacious: A 10-year-old Nazi whose best friend is an imaginary, goofball Hitler falls in love with an older Jewish girl and learns the error of his ways. But Waititi never quite lands on a tone or style, and as "Jojo Rabbit" moves from comic absurdity to cloying sincerity, the movie turns both smug and sanitized. Relentlessly promoted as an "anti-hate satire," it could more accurately be described as a calculated cartoon.

And it's probably going to earn an Oscar nomination for best picture because there are loads of people — those who voted in Toronto, those who gave it an "A" rating to the movie market-research service Cinemascore — who leave the theater feeling like they've been wrapped in a warm blanket of love. "[Bleep] off, Hitler!" Jawohl!

So, yes, while I can't fathom why anyone would consider "Jojo Rabbit" one of the year's best movies, I can't ignore the evidence indicating Oscar voters are going to include it on their ballots.

What other (better) films are looking good at this early point in the race? Let's take a look.

"Once Upon a Time in Hollywood"

I've already written plenty about "Once Upon a Time in Hollywood" and "The Irishman," superb movies from revered filmmakers and the current best-picture front-runners.

"Marriage Story," which Netflix has rolled out in a few theaters before it begins streaming on Dec. 6, is, by contrast, an intimate, bruising and bittersweet drama of a couple's dissolution. Rich in empathy and featuring powerhouse performances from leads Adam Driver and Scarlett Johansson (also surefire Oscar nominees), it's easily one of the year's best movies and the type of drama the academy likes to reward.

Sure bets for international ... and should be for best picture too

As I wrote a couple of weeks ago, Bong Joon Ho's dark, satirical thriller "Parasite" appears poised to pull off the rare feat of earning nominations for international film (the newly renamed foreign-language film category) and best picture. The film has earned raves, sold tickets and inspired scores of think pieces about its themes and use of instant noodles.

Remarkably, Pedro Almodóvar, one of the world's greatest filmmakers, has never had a movie nominated for the best-picture Oscar. Not "Women on the Verge of a Nervous Breakdown." Not "All About My Mother" or "Volver" or "Talk to Her" or "Bad Education" or ... you get the idea.

Almodóvar's latest, the sublime drama "Pain and Glory" starring Antonio Banderas, is one of his best. History is not on its side, but Oscar voters have shown an increased willingness to look around the globe lately. In my dreams, it makes it in.

Seriously ... how could these not be nominated?

That question is, of course, rhetorical because the obvious answer is that this is the motion-picture academy, a group still dominated by dudes who might not appreciate the beauty, depth and emotional wallop found in these two exceptional films. Lulu Wang and Greta Gerwig gave us gifts. Do not overlook them!

Possible, but depends on box office

James Mangold's handsome motor-racing melodrama could be right in the wheelhouse of the academy's aforementioned largest bloc of voters — 60-something men, "steak eaters" who dig sturdy, big-canvas stories. Its cast includes a great actor (Christian Bale), a pretty good one (Matt Damon) and the always interesting Caitriona Balfe in a supporting role so thankless that it's borderline offensive.

Possible ... because of box office

We already have one Scorsese movie. We don't need to nominate the wannabe one. Still ... there are a billion reasons why some voters might want to include it.

Probably too good for the academy (a.k.a. the A24 Awards)

Satisfying finale ... too bad it's not cinema

"A Beautiful Day in the Neighborhood"

It's possible one of these flawed dramas for grown-ups builds some momentum in the coming weeks. Each has its selling points. But I'd rather see "Knives Out," Rian Johnson's exceptionally entertaining whodunit, make it in before any of them.

Sam Mendes' World War I movie will screen four times around Los Angeles on Nov. 24, with Q&As afterward. Shot (by Roger Deakins!) to look like one continuous take, the late-arriving film (it will open in limited release on Christmas) could be a powerhouse in the crafts categories and shake up the best-picture landscape.

This article was written by Glenn Whipp from The Los Angeles Times and was legally licensed via the Tribune Content Agency through the NewsCred publisher network. Please direct all licensing questions to legal@newscred.com.